The Iron Oath is a great start to an enjoyable indie RPG, taking familiar but fun aspects of company management, map and expedition movement, and simple but addictive tactical turn-based combat that all combine wonderfully.

Sometimes a game just feels right.  Curious Panda Games is very close to that feeling with its turn-based tactical RPG The Iron Oath.  The polish and execution of this very familiar feeling game is outstanding.  With a solid foundation based on combat, harsh but fair logistics to manage a mercenary company, and a simple map interface to create a simple game with depth that is highly addicting.  It isn’t all roses though, as interaction with the party members and villains feel very threadbare.  The difficulty also varies wildly from everything is easy, to parts of the tutorial being hard to complete.  However, with a road map of solid additions planned for the next year and little patches already out the future looks bright for this gem.

In The Iron Oath players find themselves on a mission for a big payday with an established mercenary company.  After completing the mission they give celebrated combatant Vahn a party to send him to retirement.  However, once Vahn leaves the celebration, greedy member Torin gathers a few traitors and ambushes everyone.  A few of the newer recruits band around the veteran Euric to fend off the attack, before joining with trusty advisor Alaric and the leader of the troop (the player).  Taking a new name and building their reputation, funds, and recruits from the ground-up, they set out get revenge on the surviving traitors and find out what happened to Euric’s nephew Gedrick, who went missing during the attack. 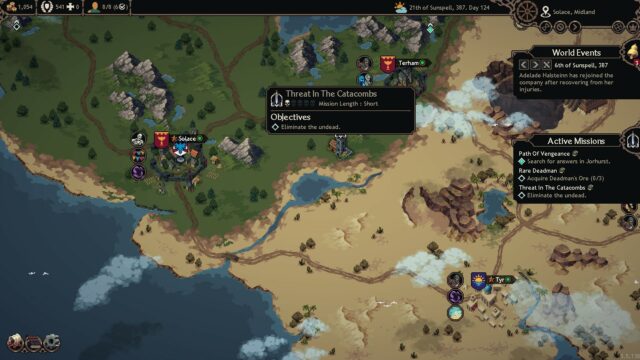 The overworld is easy to navigate, with the world split into regions and easy to access quest markers.

In its current build The Iron Oath has a simple story.  Meeting with the traitors feels little more than fighting villlains-of-the-week, as they do not even have unique sprites or names in combat.  In addition, the game includes occasional side-encounters on the road or world events.  These world events have either a dragon swoop and attack a random city, that provides a neat visual with no gameplay effect yet, or have members of the citizenry overthrow their local government and establish a new lord, which just resets their standing with that faction to neutral.  Chance encounters on the road affect the company’s health and funds, as well as potentially its standing with the local nobility, which can affect quests in town.  The continent itself is split into distinct geographical areas including swamps, snow, deserts, and woods, each of which contains multiple towns.  In each town players will find a marketplace, inn, and an infirmary.  Also in each town will be a series of quests offered by either the citizens or nobility that can raise the renown of the troop as well as make the faction more friendly.  Building renown gains the company perk points to spend on benefits such as easier morale gain or discounts on member contracts.  Renown can also be used to improve the effectiveness of dungeon expeditions, such as provision usage, as well as campfire resting options in dungeons.

Most quests involve having to enter a dungeon.  Dungeon expeditions begin with selecting a party of up to four members and buying some healing or exploration provisions.  The chosen members go through a map of interconnected rooms with a mixture of traps, treasure, and encounters.  Encounters take place on a 2D hex-grid battlefield, with the party on one side and enemy’s on the other unless they are ambushed.  Combat is turn-based with the highest speed unit going first, and lasts until one side is defeated.  Characters retain their current health and skill usage after combat, which can only be replenished at camps.  Camping opportunities are limited by the dungeon-size, so deciding when to rest and use abilities wisely is important.  Characters can lose health or pick up injuries from traps.  Injuries impact attributes and need to be dealt with quickly, or they become worse and eventually lead to death.  As a dungeon exploration goes on, character can pick up conditions that add to the chances of being ambushed or falling into a trap. 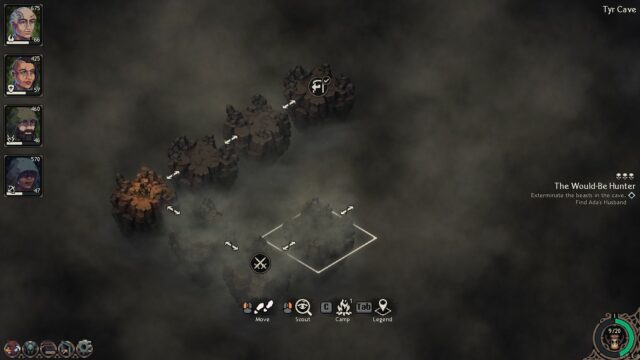 Traversing through a dungeon, complete with an upcoming encounter room scouted out.

There are multiple ways characters can leave the troop: low morale, expired contracts, retirement through old age, and death.  While characters don’t retire easily, they become more expensive to retain as they get stronger.  Backgrounds for each character are generated from a few different predetermined possibilities and can include details from the world at large.

New recruits are found in towns and can come from six different character classes that each have six different abilities.  These abilities are varied with attacks, buffs, debuffs, and healing depending on the class. Each recruit is a little different, especially at level one, where only three of the skills start unlocked and are chosen at random making some balanced and others that skew to a particular role.  Every three levels players can choose an additional ability to unlock, eventually making all six available.  However, gaining levels is easier said than done, particularly on higher difficulties where its harder to keep new recruits alive.  The available classes — including fire-based pyrolancers, adaptable support pugilist, and magical stormcallers — mix and match well together but is recommended to bring at least one with healing abilities to save on purchasing potions. 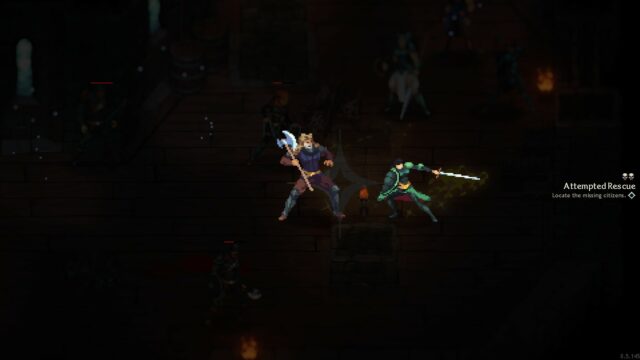 The final blow to a bandit leader from a guardian.

The Iron Oath‘s visuals shine as pixel characters move around fluidly to execute flashy attacks on each other.  The designs of the characters are varied enough so they all look unique, if clearly built from the same template..  Enemy designs vary from skeletons, demons, bandits, and scaly wolf-like nulbeasts.  Attention to detail continues onto death animations, with demons being dragged to the depths each time, and living beings that can explode into little bits when taken out with a critical hit.  The game’s music rotates between various adventuring themes rife with undercurrents of exploration.  This music doesn’t overstay its welcome but is not very memorable either.  Sound effects are welcome as they serve to punctuate the gorgeous visuals.

The Iron Oath is a great start to an enjoyable indie RPG, taking familiar but fun aspects of company management, map and expedition movement, and simple but addictive tactical turn-based combat that all combine wonderfully.  The road map features plans to add more of everything — including character classes, gear, enemies, and story scenarios — and offers a bright future for the game.  Those looking for an easy-to-grasp tactical management RPG with a familiar but highly refined gameplay loop should check this game out.  Currently clocking in around fifteen hours of story content with infinite ability to re-do quests to build the best mercenary troop around, watching this one expand through Early Access will be a treat.