Many love to play RPGs, and some have also discovered the fun creativity of making their own worlds, characters, stories, and battle systems. A popular program geared for this creative purpose is RPG Maker. The software is currently highlighted in the ongoing RPG Maker Festival 2022, with live broadcast training videos, support documents, official guides, and sales on Steam. The festival is also celebrating and encouraging the accomplishments of aspiring creators and passionate indie game developers who love RPGs.

During the community festival, Gotcha Gotcha Games announced RPG Maker Unite, a new software engine being developed with a scheduled release for sometime in 2022. A new Steam page for the pending software has surfaced with details about the ambitious project. For the first time, the powerful Unity software engine will be used in conjunction with RPG Maker, enabling greater features and capabilities for RPG creators — no coding skills required.

This news should sound promising to the many enthusiasts in the vibrant RPG Maker community since it exhibits continued innovation. Over the years, the software has been well-supported, seeing multiple version releases with updated features along with general patches and fixes. For this RPGamer and writer, who is new to the RPG Maker club, discovering the creative potential of making my own RPG has been like a dream come true. While I have zero delusions of grandeur towards developing the next top-selling role-playing game or even creating a ‘love-letter’ to JRPGs, I love imaginative and inventive RPG ideas sparked by RPG Maker. 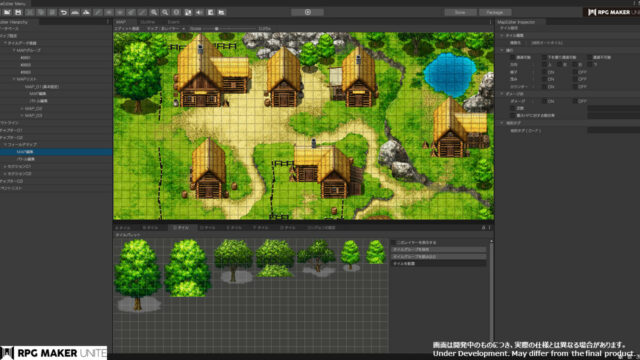 RPG Maker lets anyone be creative through its easy-to-use software, like using this tile-based map editor.

I’ve been using the most recent version, RPG Maker MZ, to generate game characters, practice tutorials, and create my own maps and locations, that last one task being my favorite so far. Hours of time have flown by while world-building tiles upon tiles of pixel art. For example, it’s easy to select different trees, bushes, and trails to create a forested area where party members can encounter random monsters or find treasure chests. There is almost a gameplay loop in the creative process where one can build a map with Event tiles, play-test it all, and then repeat. With every iteration, the process feels engrossing as each cycle of build-and-test gets refreshed in a new way. Seeing immediate results from one’s creative efforts spurs progress thanks to the instant feedback that speeds up the trial-and-error learning.

With that, the most appealing improvement coming to RPG Maker Unite looks to be its enhanced map editor, which is said to support pre-rendered backgrounds and object-oriented map structures. According to the announcement description, and based on new screen images, these features appear to be new in the Maker series and should make the presentation of maps appear less pixelated and more realistic, with naturally curving pathways rather than blocky tile-based trails for example. In addition, using the Unity engine could mean that special effects will get a visual upgrade too, which might look similar to the shine of modern pixel-art RPGs. 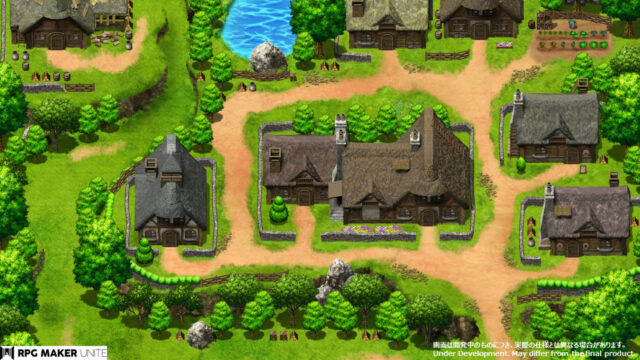 Though RPG Maker games are sometimes dismissed as derivative, they shouldn’t necessarily be overlooked. One noteworthy title made with the software and released to general praise is Ara Fell. Developed by Stegosoft Games and published by DANGEN Entertainment, it started as an RPG Maker project and later transitioned to development with the Unity engine to enhance the game. The improvements made Ara Fell: Enhanced Edition a thoroughly enjoyable RPG. Having played it last year, I’m now looking forward to the developer’s next title, Rise of the Third Power, which was released this month and earned a highly positive review from Anna Marie Privitere. With its use of 16-bit style pixel art, it might appear to resemble a modest RPG Maker project, but it was also made in Unity to great effect.

These titles could represent some of the potential of RPG Maker Unite. Though some of their roots may stem from RPG Maker, both games ultimately benefited from development in Unity. The more robust engine allowed the games’ creators to bring their stories and characters to life in ways beyond the basic capabilities of RPG Maker, with particle effects and a crafting system in Ara Fell for example. As such, they showcase what indie RPG developers might expect from forthcoming RPG Maker Unite.

With in-depth stories and engaging battle systems, it’s no wonder that RPGs captivate the imaginations of many RPGamers. Likewise, it shouldn’t be surprising that some players are stoked to put their creativity to work in making their own RPG to play. With RPG Maker, impassioned fans of the genre can tinker with making a role-playing game and may even become indie RPG developers. This has been a dream of mine since I was a young whippersnapper grinding through Final Fantasy VI (FFIII on Super NES). Its story and gameplay kindled my imagination, and after discovering RPG Maker years later, I felt that spark reignite. With the latest and greatest version releasing this year, RPG Maker Unite looks to fuel the fun of RPG creation better than ever.