Rise of the Third Power Review

The Price of Power

It sometimes feels like the biggest RPGs are always telling the same story, while throwing out unfamiliar, multi-layered mechanical systems that take dozens of tutorials to explain.  While the rose-tinted glasses are thoroughly off, there’s something special about remembering the games of yesteryear and the feelings they evoked.  Scrappy indie RPGs have taken up the mantle of telling different kinds of stories, ones which stand apart from the crowd, while others reclaim simpler systems that made 16-bit RPGs beloved.  Both of those features come together in Rise of the Third Power, the second title from Stegosoft Games, which melds together classic gameplay with a modern, engaging high-fantasy tale.  With a simple, yet fun, combat system, party mechanics that encourage experimentation, and a highly memorable story, this is a throwback title few RPGamers will want to miss. 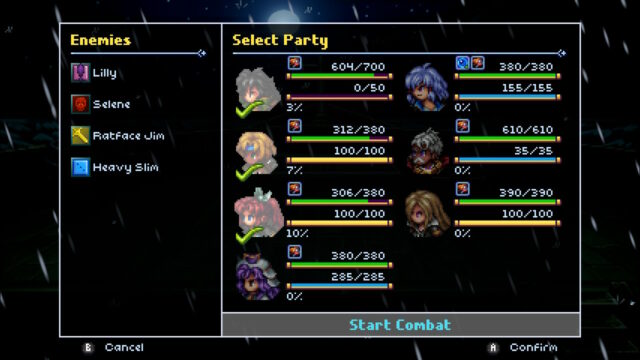 Pre-emptive attacks allow the player to choose allies based on which enemies will be joining the fray.

Bucking numerous classic storytelling tropes, the player lands not at the beginning of a tale that picks up steam as it progresses, but smack in the middle of already boiling tensions: three distinct nations, with an uneasy truce between them, are unknowingly at the brink of war.  With a mixture of both expected plot twists and some unpredictable curveballs, the well-paced story keeps players wondering what’s going to happen next.  Additionally, Third Power‘s immersive story truly shines with the creativity of NPC dialogue and side quests scattered throughout the game that give the world an unexpected depth; it seems indies have taken notes from longtime developer Falcom and are making a best effort to apply its principles of strong storytelling to their own titles.  Throughout the game’s twenty or so hours, players will celebrate successes, mourn losses, and avenge the fallen.  Despite being in a fantasy setting, the narrative does an amazing job making all the characters feel like they have true humanity, with their own virtues and vices.  The plot also delves into adult issues in a mature, poignant way, including the end of a relationship and what it means to move on in a healthy manner.  The game’s story is easily Third Power‘s strongest element.

Combat feels like coming home to a SNES-era RPG without being tied unnecessarily to game design limitations of the past.  Three party members line up on the right of the screen while enemies are on the left, with a meter at the top of the screen showing turn order for each round of combat.  Many abilities allow the player to manipulate this turn order, enabling allies to go sooner while pushing back enemy attacks to later in a round.  By and large, combat will quickly revolve around loading up bosses and even most regular enemies with numerous debuffs before letting loose a string of strong attacks which are stronger for the status effects applied to foes.  What keeps this system from being entirely stale is the slowly yet steadily increasing exhaustion meter for each character.  Exhaustion will slowly drop away as characters rest and allow other allies to step in for them, are healed with items, or removed entirely by staying at an inn.  Sleeping also bestows temporary party boosts, which are helpful against some of the tougher enemies the Third Power provides.  The most strategic players will be able to sneak up on many enemies, providing a pre-emptive attack that permits the full party to act first, as well as decide who will be in the front lines during combat.

Each character has three main pieces of equipment to wear into battle.  Instead of replacing these with new store-bought items, the player is instead tasked with crafting upgrades with materials acquired through combat, found in treasure chests, or occasionally purchased in a store.  Weapons can be upgraded a number of times, provided their crafting recipes are discovered, with the final weapon for each character requiring an extra bit of effort to unlock.  Improving all equipment, including armour, is absolutely essential on higher difficulties.  Each character can also equip one accessory, which must be worn through a variety of battles to become “attuned” before its final perks are unlocked.  These buffs run the gamut from increasing stats to reducing exhaustion, the cost of spells, and more.  Players are also further motivated to explore and complete quests, as artifacts can be found throughout the world that buff the party, regardless of who is on the front line, and increase key stats like critical strike. 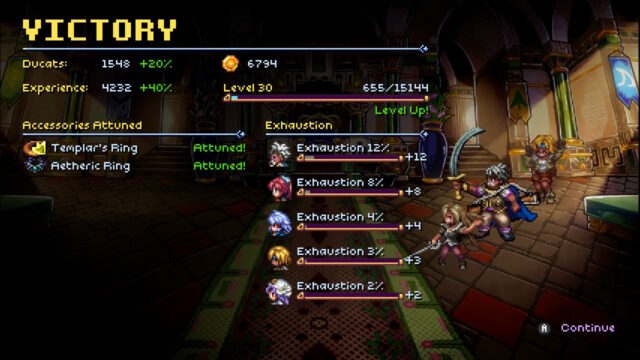 Successful combat nets players a variety of rewards, along with exhaustion.

A party is only as strong as its weakest link, and to ensure all characters have an opportunity to equally shine, the party levels up as a whole, rather than individual characters.  At each level up, the party is given a number of talent points, which the player may divide among all party members as desired; when a new party member joins the motley crew, a chunk of talent points are also added to the pool.  As each character’s talent tree fill out, the cost of adding to their skills rises regularly; there is a level of strategy that comes into play when deciding between loading up a favourite character with more skill points early, or spreading them out evenly among a larger number of characters for incremental gains, which grow to be meaningful over time.  As there are also small periods of time when certain party members are unavailable, understanding how each character functions in the group, taking care to spend talent points on each one, and keeping everyone well-equipped is always important.

Each of the eight playable party members has a general focus, with some having a secondary role — for example, Corinna is a damage dealer with some unique debuffs, while Rashim is largely a tank whose talents focus on improving his speed and increasing how frequently he can pull in enemy attacks with his Lure abilities.  Other characters like Reyna focus almost exclusively on buffing and healing, while Arielle wield a giant cannon and can dish out high amounts of damage to enemy parties.  Natasha can both heal and do damage, but doesn’t do either as well as the characters who are focused on one or the other.  No party of three can do everything perfectly, so it’s up to the player to decide what balance is right for an individual situation, and if the situation calls for it, party members can be swapped out a total of three times during any battle.

How players choose to invest their time in Third Power will depend on which of the four diverse difficulty levels is selected.  Normal mode allows players to generally glide through the game without grinding, while the Hard difficulty encourages players to do a small amount of grinding, craft potions more often, and make complementary class choices.  Expert difficulty pairs mandatory grinding with careful management of gold and crafting materials to ensure enough items are on hand, and demands players make tough talent choices.  On the opposite side of the spectrum, Story mode adds an ability to the player’s combat menu that immediately wipes out all enemies, including bosses, for those looking to primarily experience the game’s story without grinding; this ability is optional to use, and even players on Story mode can choose to battle as normal. 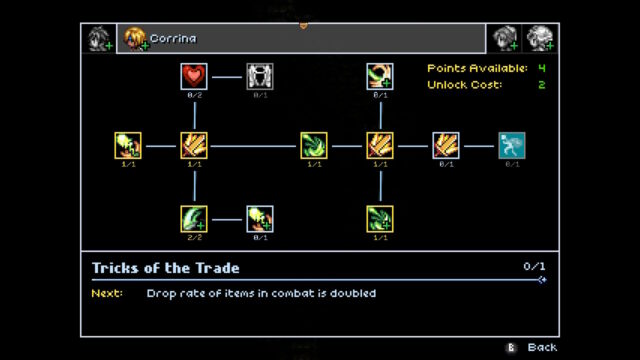 Choose talents wisely, as each party member must judiciously select which perks to focus on.

The aural presentation of Third Power is also a step up from the developer’s previous offering, although this remains one of the weakest parts of the game’s presentation.  Both the title’s overall music and sound effects are adequate, but neither are especially memorable, even in high tension moments.  It’s worth turning up the volume for, but very little will stick around past the final credits.  Similarly, graphics are a nice step up from the team’s previous game; accessibility options including the highlight colour are also a simple but highly appreciated inclusion.  However, one feature that would have been truly appreciated but is strangely absent from Third Power is a teleportation mechanic; the second half of the game requires significant backtracking, and slogging through areas the player has already completed hinders the title’s otherwise excellent pacing.

Stegosoft has made another excellent step towards capturing the nostalgia of SNES-era RPGs, while not clinging too heavily to the mechanics and constraints of yesteryear that no longer feel fun in an indie RPG.  For those who jumped into Ara Fell Enhance Edition, Third Power feels like a natural progression forward, with improvements in every aspect of the game, while cutting out a chunk of the tedious bits.  For those craving a JRPG that feels like it’s right at home on a Super Nintendo, while seamlessly melding in modern conveniences like adjustable difficulty level and crafting characters based on what makes the most interesting party for the player, Rise of the Third Power is a prime example of a true throwback gem, and I can’t wait to see what the team has in store next.