Bethesda Softworks announced its 2022 update plans for online RPG Fallout 76. Spring will feature a new map-wide event titled Invaders From Beyond, which involves aliens and UFOs. Players will be tasked with defeating the extraterrestrial invaders and destorying their Brainwave Siphons. The update will also include changes to the Fallout Worlds system including regular challenges and new building and PvP settings.

Summer will feature three public events — Test Your Metal, Eviction Notice, and Moonshine Jamboree — while fall will add the Expeditions: The Pitt update. Expeditions: The Pitt will add a new hub in Whitespring and let players take their first steps outside of Appalachia through off-site missions. These missions come with new rewards, NPCs, and quests, and will see the appearance of the Trogs, an enemy introduced in Fallout 3‘s The Pitt expansion.

Finally, winter will see the arrival of the Nuka-World on Tour travelling roadshow. This update, which focuses on the Ash Heap region, will include multiple public events including a new region boss.

Fallout 76 was released in November 2018 for PC, PlayStation 4, and Xbox One. The game is set in 2102, twenty-five years after the nuclear assault that turned America into a wasteland. Players control dwellers from the titular Vault 76 in West Virginia, tasked with reclaiming and rebuilding civilisation. 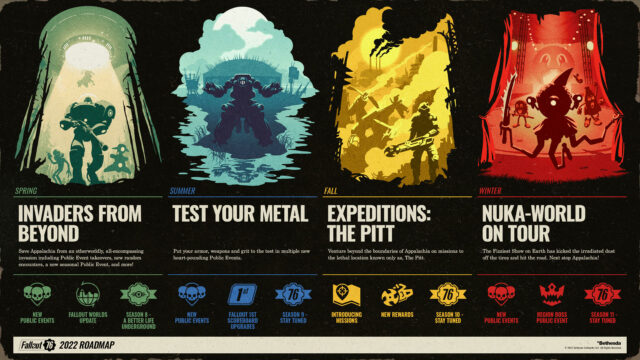