ELEX II is geared heavily towards those who’ve already spent time in the world of Magalan.

My experience with Piranha Bytes’ 2017 release ELEX is limited to the demo of the game I got to preview at E3 the year before. This means I only know that it’s an open-world RPG that marries a post-apocalyptic sci-fi setting with more standard fantasy elements. It also means I’m not entirely sure I’m the right target audience for the game’s upcoming sequel, as even six hands-on hours with ELEX II left me with the strong impression that the game is geared heavily towards those who’ve already spent time in the world of Magalan.

ELEX II picks up several years after the events of its predecessor. Players once again take control of Jax, the hero who saved the world from the menace of the Hybrid (an event that was often referenced in my time with the ELEX II preview build). Apparently, the world has moved on from the events of the first game, and Jax has withdrawn into the solitude of the countryside to live in peace and quiet. That is until a new threat befalls Magalan, literally crashing down out of the blue, leveling Jax’s humble home in the process and nearly burying him under its wreckage. Infected by some sort of slow-spreading mutation during his encounter with these alien invaders, Jax once again takes up arms in defense of his homeworld. 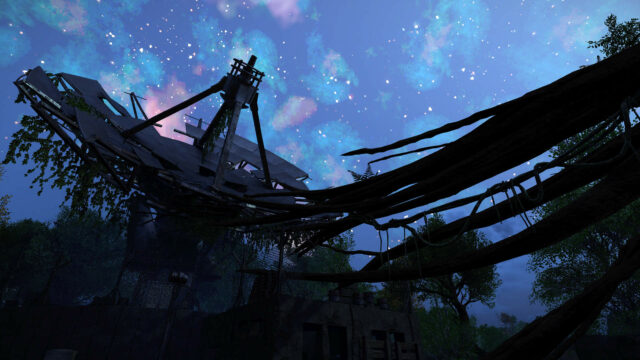 The world has endured its apocalypse, but remnants of the old civilization can still be found in places.

ELEX II delights in throwing players right into the deep end. Events, factions, locations, and characters from the previous game are frequently brought up and referenced, with little to no context given to help newcomers make sense of them. (To be fair, it’s unclear how much of this may simply be due to the game still being a work in progress, with some aspects likely still awaiting implementation prior to the planned launch window of March 2022.) The game world is open to explore freely, meaning it’s not only possible but even very likely that players will encounter enemies far beyond their current scope of abilities, leading to frequent deaths. In fact, it wasn’t until I was about five hours into my six-hour stint with the game that I finally felt confident I had stumbled upon the recommended starter area, feeling to some degree up to the challenges presented to me. Before that, I roamed rather aimlessly, getting snacked on and one-shotted by enemies routinely.

The discovery of Elex, a mysterious substance, has given the inhabitants of Magalan an interesting mix of technological and magical tools and abilities to use in their everyday lives, effectively combining both sci-fi and fantasy elements into one game. This is reflected in the game’s bestiary, where seemingly disparate design influences frequently occur together. On one occasion, I was following a rocky riverbed, fending off a typical post-apocalyptic beastie — a giant, mutated flying bug — when suddenly a loud crashing and shaking directly behind me alerted me in the nick of time to a new danger. I wheeled around and was surprised to face a large cave troll that had crawled out of whatever hole he had been hiding in to defend his territory. The skull next to his health bar quickly clued me in that he was not a customer to be trifled with, so I turned on my heels and beat a hasty retreat instead.

When not running from powerful foes, players will have to tangle with ELEX II‘s somewhat unrefined combat system. Equipping yourself with a rudimentary weapon early on makes melee strikes possible, and basics like a stamina bar and a dodge mechanic are present, but the whole affair lacks finesse, the auto-lockon system would benefit from some sort of on-screen indicator, and going up against multiple foes simultaneously quickly proves to be ill advised. Even though it doesn’t take long to find stronger weapons and gear, in addition to ranged and high-tech weaponry, prohibitive stat requirements mean players will be giving their swinging arm a good workout for quite a while to come. 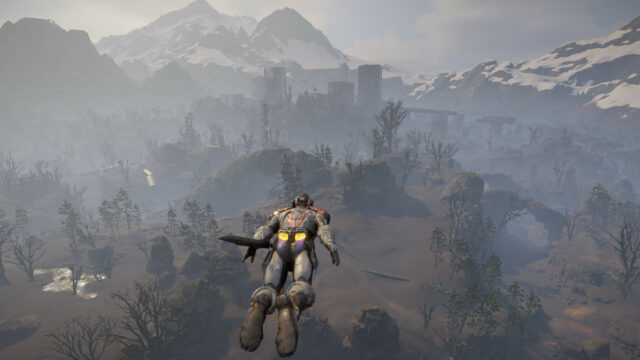 The jetpack lends exploration a boatload of style points.

One of the signature exploration tools that sets ELEX II apart is Jax’s jetpack, which grants access to out-of-reach places and makes descending from any height not only possible but graceful to boot. Players are given access to this helpful apparatus right from the start, and recklessly jumping from great heights only to feather the boost moments before impact to land safely never gets old. That said, the jetpack’s starting statistics, like all of Jax’s gear, are laughably weak, and the upgrade systems are not only unintuitive and left up to the player to work out on their own, but also require large amounts of various materials and currencies, not to mention specific workbenches (or trainers, in the case of skills) to be located. Over the course of my play sessions, Jax leveled up five times, but I still was nowhere near being able to actually improve my gear in any noteworthy way.

ELEX II didn’t tick a large number of my personal boxes at first. I found the storytelling lacking, at least from a newcomer’s perspective, and the game’s focus on having the player join a faction, recruit team members, and build up a stronghold for humanity’s stand against an invading force isn’t exactly my preferred gameplay loop. Difficulties parsing the game’s upgrade systems and finding a non-lethal exploration groove weren’t helping things, either. But something strange happened as I hit the fifth and sixth hour of gameplay: I found myself getting into the swing of things more. Maybe it was the occasional audio log or other bit of world building I stumbled upon — a method of narrative delivery I personally enjoy. Maybe it was finally coming across an area filled with enemies and quests actually intended for my low early-game skill threshold. Or maybe it was the fact that I had finally gotten the hang of the upgrade system enough to learn my first skill, upgraded my stat points a few times, and felt just that tinier bit more prepared to take on the world of Magalan. Whatever it was, I was able to see past my early growing pains and see the potential fun the finished game could deliver when it releases early next year.