The Legend of Heroes: Kuro no Kiseki Details Grendel Battles

Nihon Falcom released new details and images for The Legend of Heroes: Kuro no Kiseki, the newest entry in the series. The update introduces some additional characters and details Grendel battles where protagonist Van undergoes a special transformation.

The newly-introduced characters are all associated with a criminal syndicate named Armata that is growing in the Republic of Calvard. Melchior, Viola, and Alexandre are three leaders of the likely antagonistic group and are devoted to their boss’s goal of spreading fear. Melchior joined from a different organisation and uses knives and bombs to crush his opponents physically and mentally. Viola is a sadist that uses a gun that fires many small needles at her target. Alexandre is a former government official from another country but was forced to flee to Calvard, where he was recruited by Armata’s boss. 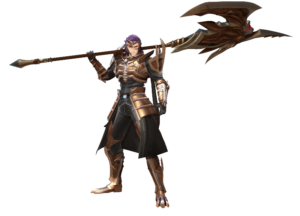 The other two characters are not members of Armata, but are cooperating with it. Arioch of Massacre wears a suit of armor and wields are large halberd. He has been killing jaegers and thieves in Calvard’s eastern region for unknown reasons and claims to resonate with Armata’s ideals, currently acting as its strongest fighter. Olympia of Gold is a mysterious woman who uses a platinum angel-like doll. She sees people, including herself, simply as objects.

During the game, protagonist Van will join forces with the artificial intelligence Mare in battle, turing him into a powered-up form known as Grendel. In this state, Van’s stats are boosted and he is permitted two actions per turn, with another ability able to increase this to three. Van’s Grendel form has a basic melee attack that lowers the enemy’s physical defence and a heavy kick attack that lowers magical defence. It also has a blade-based melee craft that hits multiple enemies and reduces their speed. Some Grendel battles will feature other party members, which can benefit from the transformation with link attacks and support abilities.

The Legend of Heroes: Kuro no Kiseki takes place a year after the events of the previous title, Trails into Reverie, and two years after the events of Trails of Cold Steel III and Trails of Cold Steel IV. The game is set in the diverse Calvard Republic, the eastern neighbour and superpower rival to the Erebonian Empire that was the setting for the Trails of Cold Steel subseries. Kuro no Kiseki is set to be released for PlayStation 4 in Japan on September 30, 2021. A western release has not been announced, though NIS America has announced western releases for previous titles in the series.