These four hours really were just an appetizer, and I, for one, can’t wait to dive in all over again when Glitched releases fully.

If I’m 100% honest, Glitched by En House Studios is a game that I normally might not pay much attention to. I like old-school RPGs as much as the next guy — more, probably — but the art style may be just a nudge too far on the basic side and the first-person turn-based combat a little too reminiscent of games that haven’t gone down too well with me in the past. But a game chosen for RPGamer’s Most Anticipated list, not just once but two straight years running, might be worth at least checking out, I said to myself. One considerably meaty four-hour demo later, courtesy of Steam Next Fest, and I can honestly say, contrary to my own popular belief, that Glitched is unlike anything I’ve played before, and I’m excited to see it in its completed form.

Conrad is a young man living in the small village of Betwixt, with his sights set on something bigger: moving to the big city of Gunden and attending the hero academy in order to make history. Conrad tries to convince his best friend and local fry cook Gus to leave with him, but Gus is your typical boring NPC, content with living a boring life in a boring village. It’s a pretty straightforward setup for the adventure to come — or so you’re meant to believe. Because on the eve of Conrad’s departure, while he and Gus meet on a nearby hilltop to say their final goodbyes, the unthinkable happens and a strange spatial disturbance (a “magic thing”, as the locals will refer to it from here on out) makes Conrad vanish into thin air, leaving Gus in its wake, frightened and disturbed. Conrad seems to be utterly wiped from existence, as even the villagers don’t remember him, and he’s disappeared from photos he was once in. But the threat of the magic disturbance hasn’t gone unnoticed, and so Gus, now dispatched to Gunden to deliver a letter requesting aid from the authorities, becomes the unwilling protagonist of what should have been Conrad’s story, and the game begins.

But there’s yet another twist to this set-up. Due to his proximity to the disturbance that swallowed Conrad, Gus has somehow become aware of an ever-watchful presence — you, the player — guiding and observing his every action. And thus the fourth-wall-breaking commences. Gus frequently has conversations with the player, either as part of the standard narrative or in the form of side dialogues that pop up via button prompts during the journey. In fact, the majority of the four-hour demo was focused on the narrative and world building, through events taking place and characters interacting, with only a small portion spent in actual combat, a great balance for those worried by the proposition of a combat-heavy grindfest. 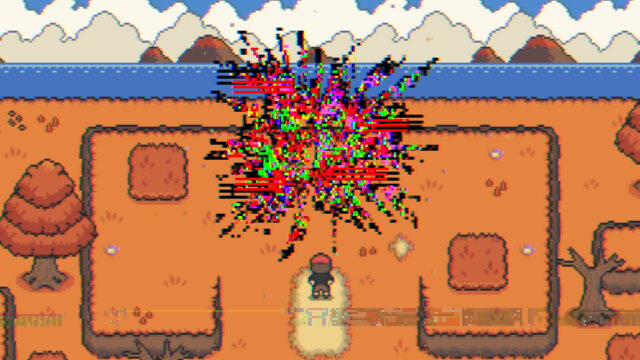 Looks like it’s time for the final boss. Nope, it’s actually the very start of the adventure.

The player is frequently given choices to make, sometimes affecting the greater narrative, other times shaping Gus’s personality. The game utilizes six Essences — character traits, essentially — that correspond to certain actions and dialogue options and, in turn, open up options and skills as the game unfolds. Insight, Bastion, Harmony, Conquest, Zeal, and Drift are visually represented via different color schemes, and one of the game’s first quests has the player encountering a personification of each, learning a bit about them in the process. But it’s not just Gus that operates under these essence guidelines; every character in the game, down to even enemies, appears to be shaped in a similar way, as every character portrait conforms to the same color-coding as Gus’s does. Due to the choices I made, as well as a pre-game personality test presented to me, Gus turned out to be guided primarily by Insight, causing his character portrait to receive blue color-coded highlights and granting him access to the Cosmic Knowledge magic spell, which examines items and characters directly in front of Gus and provides further information.

Player choice extends far beyond shaping the protagonist’s personality. On the way from Betwixt to Gunden, the story took several unexpected twists and turns, and at one point I was presented with a metaphorical fork in the road. While in the deepest, darkest woods and searching for a way out, a feline party member I had just encountered offered me a number of possible paths to take. The forest exit was said to be guarded by a giant bug, whom the forest dwellers avoid at all costs; it was clear I was being discouraged from following this course, though the choice was ultimately mine. Alternatively, a witch was said to live somewhere in the forest, in the opposing direction, and seeking her out could potentially lead to a way out. Thirdly, a direct route through the forest was also available, though this led straight through the domain of a warlike race of feline warriors, whose queen was not known for her reasonable mindset. From what was seen in the demo, it appears the game — or at least the majority of it — will make combat avoidable given the right choices have been made. Even when enemies were encountered, some brief dialogue typically seemed to present non-violent alternatives to battle. 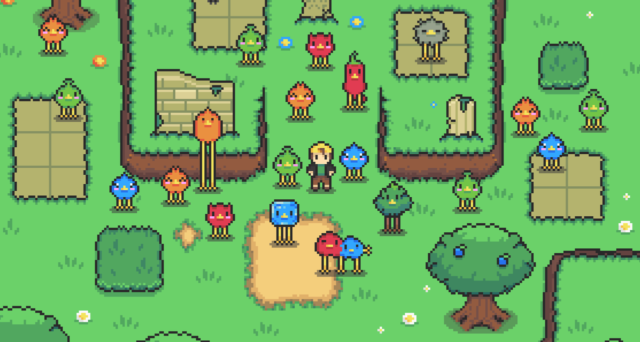 A colony of bird buddies. TRUST ME when I say this is nothing on the “creative weirdness” scale of what this game offers.

Since the demo was very light on combat, I decided for the pugilistic approach and ran headfirst into an epic showdown with the big bug. Like the rest of Glitched, the simple aesthetic belies a combat system that’s quite easy to pick up but still offers plenty of flexibility. In the demo, characters have four skills they can utilize during battle, ranging from melee damage and magic to healing actions, consistent with character type (a avian party member was able to perform a pecking attack, while the feline could scratch and cause bleeding damage, for instance). Each skill has a certain charge cost, and characters can act repeatedly as long as the on-screen battery indicator has charge remaining. Skills also have limited uses per battle, but these can be refreshed at the cost of additional charge. Having one character act, then, is quite simple, but once the party expands to three members, all depleting the same charge gauge, much more strategy is required. From what was evident in the demo, status abnormalities like stun, bleed, poison, and fire are also quite common.

That about covers the basics of Glitched; anything further would honestly start entering spoiler territory, and from what I’ve seen so far, this game will be an absolute joy to walk in to and experience as blind as possible. The writing is strong and plentiful, managing to be charming, funny, and even touching at one particular point near the demo’s end. Best of all, it feels like these four hours really were just an appetizer; there’s an event that occurs right near the end that really opens up the possibilities for exploration and storytelling in a hugely exciting way, and I, for one, can’t wait to dive in all over again when Glitched fully releases later this year for PC, Mac, and Linux, and in 2022 for consoles.