A physical Guardians Edition is currently available to pre-order from Bandai Namco’s European store (North American availability has not been announced) for £99.99 on consoles or £89.99 on PC that includes: 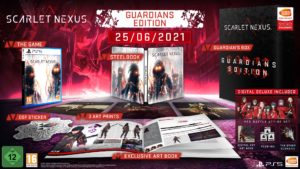 In addition, Bandai Namco announced an anime series for the game. The series is being produced by animation studio Sunrise and will be available to stream through Funimation this summer. The exact relation to the game is not confirmed, but it will star the game’s two main protagonists, Yuito Sumeragi and Kasane Randall.

Scarlet Nexus is set in the far future after a psionic hormone is discovered that enables humanity to obtain psychokinetic abilities. Coinciding with the new power, mutants known as Others descend from the sky and exhibit thirst for the brains of humans while being impervious to regular attacks. However, those with psionic abilities are able to strike back and are recruited into the Other Suppression Force.