It’s a fascinating balancing act that’s difficult to describe in words but once in hand is initially addictive.

The novelty of the rogue-lite has long since worn off. Audiences now have certain expectations, an understanding of form and structure these games are supposed to follow. Loop Hero doesn’t break these conventions, but it does offer a nice twist that helps it to stand out from much of its competition. It’s an eye-catching affair with compelling underlying systems, but the actual act of playing can’t quite carry its ambitions.

The game begins the way it continues: enigmatic. A mage known as the Lich has destroyed the old world and the new one that has taken its place is a chaotic nightmare where even the very land itself has become ever-shifting and shrouded in darkness. The surviving population exists in a state of fear and seemingly magic-induced amnesia, unable to organize or defend themselves given their dwindling numbers and lapses in memory. The player, known simply as the Hero, is one of the few resistant to some of these effects. Though their knowledge of the old world is limited, they seem to remember at least parts of the world despite its changing nature. If this sounds like a convenient hook to hang a run-based game on, that’s because it is. Yet Loop Hero gets a lot of mileage out of its premise and limited character interactions. The writing is sparse but economical, with characters rarely having more to say than the first time they appear but managing to leave an impression in that time. The dialogue is fittingly strange and esoteric, but surprisingly poignant and even humorous, if bluntly so. Even the monsters the Hero runs into have something to say, often irony-laden musings about how it would be nice to not be in conflict, but forces compel them to. While it’s uncertain that the game’s writing ultimately coalesces into a coherent theme, it’s a lot more interesting for trying. 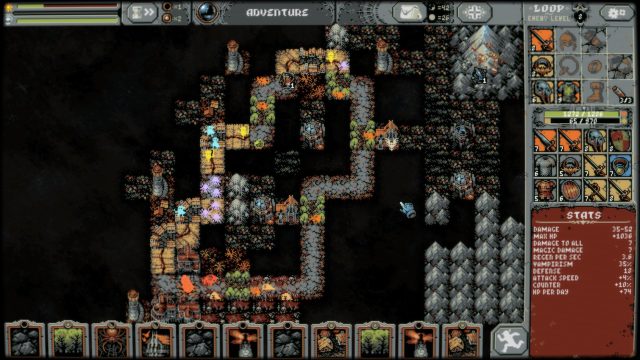 Loop Hero’s retro fidelity creates a colorful collage as the game map slowly gets filled in.

Playing Loop Hero can be can be a disorienting experience at first. Primarily, players will go out on expeditions, represented by a 8-bit map of a small sprite walking in circles along a randomized path. The player has no direct control over the Hero, instead manipulating items and, more interestingly, the map itself. As the Hero walks along the map they will engage with monsters in their path, activating a battle screen reminiscent of of NES-era RPGs. The battles themselves also accept no input from the player, though they still have the ability to swap items during the fight. Defeating monsters generates items the Hero can equip or tiles from a pool chosen before the expedition. It’s here where most of the player’s choices come into effect. Generated cards form a hand, from which they can be placed onto the map to alter the game state. Playing Rocks and Mountains increases the Hero’s maximum HP; Groves spawn ratwolves to fight and generate resources every time they’re entered; Villages heal the Hero while also providing a “quest”, which empowers another enemy on the map but makes them drop greater rewards. In actual play, Loop Hero is less an RPG and more a weird management sim. While the Hero goes off to mindlessly walk forward and fight whatever gets in their way, the player chooses both the obstacles in their way and the means to empower them to survive for as long as possible as completing more loops yields stronger equipment and more numerous resources. To add to that pressure, putting too many tiles down on the map will eventually spawn the chapter boss, a rather difficult fight that supplants the campfire the Hero always begins at. It’s a fascinating balancing act that’s difficult to describe in words but once in hand is initially addictive.

And that’s just the start. In the same way that the game’s denizens are at a loss for how their world now operates, players begin at a similar point before discovering that there is a lot more under the hood than just placing down tiles on a map. Many of them have odd and unique interactions that can really only be discovered by experimentation, each feeling like they present a wealth of new possibilities in the game space: A 3×3 group of Rocks or Mountains make a Mountain Peak, which greatly increases HP but spawns a harpy every few days; placing a Vampire Mansion near a Village turns its populace into ghouls for several loops before becoming a stronger version of the Village as the vampire count brings prosperity to that land; a Lightning Tower burns down Forests along its cardinal directions, making them increase the magic damage of the Hero. This likens the act of placing tiles to constructing an 8-bit collage. There’s a pleasant aesthetic payoff to building out a map, which starts incredibly barren but often looks like a unique painting by the end of a run. 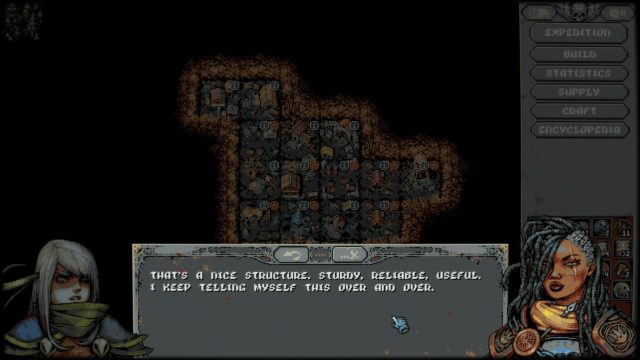 The character portraits are all beautiful, even if they don’t make many appearances.

Outside of the loop, Loop Hero plays far more traditionally and this is where more of the problems begin to set in. The player manages a small settlement that provides the usual upgrades to help on future runs. Most of these tend to be useful or offer new toys to play with in the main game such as new classes and additional tiles. The classes do play quite differently from one another, but each class only feels like it has one or two viable build options as the game becomes more difficult. New tiles invigorate the desire to experiment, but once they are unlocked expanding the settlement becomes more about making the numbers go up than about fundamentally changing how the game is played. Unlocking skills for the Hero on runs feels meaningful, upgrading the Herbalist’s Hut so that potions heal 1% more HP doesn’t. But by the time the game is halfway done, there are no more interesting things to unlock and the grind sets in. Discovering how all the pieces work is engaging while gameplay itself becomes rote as more and more of it begins to depend on the tiles and equipment being helpful.

It’s a shame that Loop Hero becomes so easy to bounce off of as so much of it works. The game is absolutely gorgeous, the lo-fi aesthetic a perfect fit for its dark and vague tone. The pixel art portraits are immediately striking while the sprites themselves deliver a lot of character in a few frames of animation. The soundtrack’s understated chiptunes make the game sound like some lost retro classic being rediscovered by a new generation. The writing is far smarter than it first appears and even thought-provoking in a minimalist way. The game begins with its best foot forward, an under-explained puzzle that’s fun to parse out. But once the puzzle pieces fall into place, the drive to see it to the end starts to fall away too.