In this edition of the column we put in some overtime and stay at the office until late into the night in C3 Games’ spooky adventure title Dust to Dusk.

By day, the Tsukimiya Corporation is a run-of-the-mill company, housed in a modern multi-level Japanese office building, the kind with plastic potted plants at reception and elevators that play muzak. However, things are different at night. There have been rumors around the company of sightings of a ghostly child that stalks the halls each evening at seven o’clock. Things have gotten to the point that Jun Tsukimiya, current chairman of the company, has issued a mandatory policy that all employees leave and the building lock its doors promptly at seven each night. Unfortunately, on this particular night, Jun has fallen asleep at his desk, and missed his own cutoff time. As the clock strikes seven, he wakes to face a night locked in the potentially haunted building.

Dust to Dusk styles itself as a horror adventure, though it’s not the type of game to go for hardcore frights and shock value. Its Steam page even promises “no chase sequences, jump scares, or game overs.” Rather, it wants to establish a spooky atmosphere to get the player interested and slightly unsettled throughout its relatively short one-to-two-hour campaign. As such, it successfully manages to create a less-threatening, spooky story, though it’s questionable whether the game’s short runtime is enough to set up and pay off a satisfying narrative. It’s more of a ghost story than a true horror game, but it implements its ideas well. 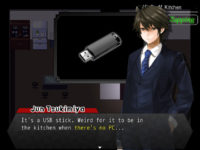 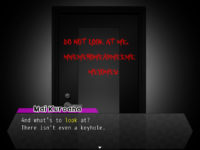 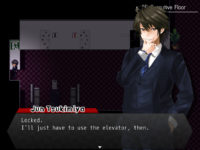 Jun isn’t the only one caught after-hours in the locked corporate building; it isn’t long before he begins to run into a handful of other characters who, for one reason or another, have stayed behind after the doors were locked down. In fact, it’s kind of surprising how lively the place still appears to be, and each person Jun runs into seems to know more about the nocturnal occurrences taking place than Jun himself. Unfortunately, they are also not too keen to share their knowledge, so as they dart in and out of the narrative, the player stays none the wiser. It feels like an attempt to build up to an end-game reveal, but a) the reveal is pretty much what most players will expect it to be and b) the whole game is too short to give any mystery enough time to simmer as slowly as it really needs to.

Gameplay shows some creative touches, however. Firstly there’s the Zapping system, which provides opportunities to “zap” from Jun to the perspective of one of the other characters during several moments in-game, guiding them through a bit of their own exploration and possibly gaining some insight into their thoughts. Each character has unique text even when just examining ordinary environmental objects, and almost every item can be examined for a bit of personalized flavor text. In several instances, progressing requires a bit of puzzle solving, which can be as simple as finding the right item or passcode for a door, or as complex as solving a riddle and typing in the answer via an in-game keyboard. There are even multiple endings, all unlockable during the game’s final moments, that link together to paint a complete picture.

Dust to Dusk’s story isn’t too hard to predict, but it does manage to provide some decent enjoyment for a handful of late-night hours. It’s obvious the developers made an honest effort to instill some neat ideas into the otherwise straightforward exploration gameplay, and the game lives up to its promise of offering a spooky atmosphere without all the over-the-top frights of other titles. And at just under a dollar, there are far worse ways to while away a late-night session in front of the computer.