The forgiving battle mechanics coupled with the accessible platforming elements are sure to challenge new gamers but may prove redundant for a gamer seeking a more refined and challenging approach to platforming.

Last summer, Square Enix announced both a new studio, Balan Company, and its first title, action-adventure game Balan Wonderworld. The game is directed by industry veteran Yuji Naka (Sonic the Hedgehog, Nights Into Dreams) and features art from Naoto Ohshima (Sonic the Hedgehog). Square Enix provided RPGamer with an opportunity to sample a few of the game’s stages in advance of the release of the demo.

The demo allows players to control one of the two main characters, Emma Cole and Leo Craig. There are options for single-player or two-player local co-op. Players are given six hair color and skin tone combinations for each character to choose from. After making a selection, the character is whisked away to the colorful Isle of Tims, which serves as the game’s central hub and is home to the eponymous puffy, bunny-like creatures. The game sees Leo and Emma travel through all of the stages, or Acts, contained within twelve different story chapters, each of which represents the psyche of a lost soul struggling with doubt or worry. During each Act, players collect Balan statues and colored drops. Collecting Balan statues unlocks mini-games and other chapters while collected drops can be expended to feed the Tim of a matching color. Each colored Tim has a different ability that is strengthened when fed drops. For example, a red Tim will assist in combat while a pink Tim will search for items. 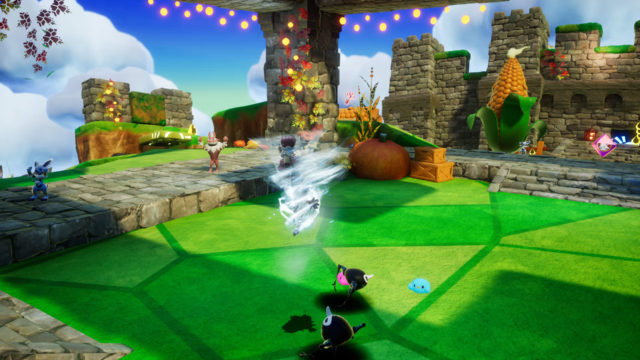 In the demo players are invited to explore two Acts from the first chapter, as well as one act each from a pair of later chapters. The first chapter focuses on a farmer, distressed by the damage caused to his fields by a storm. Players navigate through a colorful dreamscape featuring dancing creatures, platforming action, and dozens of collectibles. During each Act, the player must rely on the abilities granted by wearing different costumes to successfully navigate to the end.

The costumes are well-designed and evocative of Pokémon while their abilities are reminiscent of Super Mario Odyssey‘s cap system, even if the abilities themselves are sometimes underwhelming. For example, an Elastiplant costume allows the player to stand significantly taller to collect items and statues while the Dainty Dragon breathes fire to destroy objects or strike enemies. The game boasts over 80 different costumes, but even the fraction of costumes available during the demo have abilities which are repetitive in function, if not necessarily form. Most of the costumes seem designed to assist in negotiating the adventure elements, offering jumps or projectiles which also serve to assist in combat.

It is during the gameplay where the game’s influences of Sonic the Hedgehog and Nights Into Dreams become apparent. There is an emphasis on breezy platforming and collecting, with less focus on combat. While there are battle mechanics, those featured during the demo are sparse. Enemies can be defeated by a costume attack or a simple stomp from the player. Sustaining damage during battle results in the loss of the costume or, if no costumes are equipped, a temporary knockout which returns the player to the start of the Act. Only one boss battle was featured, and a conveniently placed Tornado Wolf costume left outside the boss arena makes it clear which costume provided the advantage over the boss, who launched tornadoes at the player. Deploying the Tornado Wolf’s attack deflected the enemy’s tornado, striking the boss. After two successful volleys, the player character and the farmer rejoiced by performing a musical number. 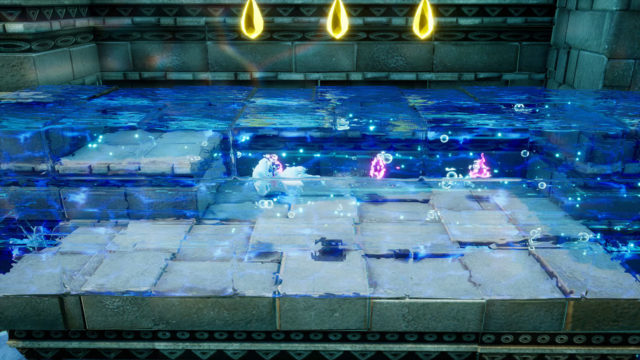 Balan Wonderworld features whimsical graphics that transport the player into the land of the charismatic maestro Balan. While each chapter features different representations of each story character’s emotional landscape, the overall aesthetic is pleasing and reminiscent of a children’s cartoon. There is no shortage of dancing plants, flying candies, or bubbles floating by in the background. The standard enemies are tiny shadows while the boss is designed like a colorful anime version of the Big Bad Wolf. The game is not all cotton candy and rainbows, however: when playing the demo on Playstation 4, there were random moments of slowdown during basic platforming sections. Overall, the game’s frenetic flying action harkens back to its Nights roots, albeit boxed in by repetitive and unrewarding, if infrequent, quick time events.

Based on the demo, it is clear Balan Wonderworld is designed to be a quirky and likable platformer perfect for young players or perhaps parents eager to introduce their children to video games. The forgiving battle mechanics coupled with the accessible platforming elements are sure to challenge new gamers but may prove redundant for a gamer seeking a more refined and challenging approach to platforming. Balan Wonderworld is slated for release on March 26, 2021, for PlayStation 4, PlayStation 5, Nintendo Switch, Xbox One, Xbox Series X, and PC. RPGamers looking to go down the rabbit hole are invited to download the demo beginning January 28, 2021.