In this edition of the column we take a look at Headliner: NoviNews, available on Nintendo Switch, PlayStation 4, Xbox One, and PC, Mac, and Linux via Steam. 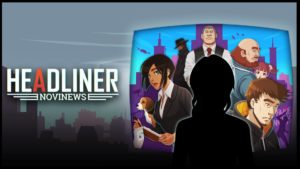 Fake news is everywhere these days it seems, and what stories hit the right notes of information and sensationalism to become viral remains a mystery.  Taking on the role as the face of a news station, players decide what the public needs to know and what remains in the shadows in Headliner: NoviNews. The gameplay loop is simple but effective: the newscaster chooses headlines for each day, then gets to stroll around town to see how the news subsequently affects both the local area and the country at large.  While the game may at first present these choices as fairly black and white, players will quickly come to understand that each action has weight.

The story plays out in fourteen in-game days, and the headliner will largely interact with half a dozen NPCs which drive home the consequences of the choices being made; unlike many visual novel games, there aren’t always clear best choices.  The player’s brother, suffering from anxiety and depression, benefits from socialized medicine and his life will vastly improve if the news doesn’t promote addictive substances.  However, the rush to provide care for all has permanent consequences for a coworker, and choosing not to carry the popular energy drink can spell doom for the local corner store.  Allying with the xenophobic government can be detrimental to the friendly foreign correspondent from the station, but can save not only lives but the career of the station manager.  Those newscasters who choose to adopt a stray dog or drone can glean more immediate feedback on each night’s choices, though both need to be fed or the player won’t own either for very long.  As certain choices can mean a significantly reduced paycheque, keeping one or both around can mean tight fiscal choices.

To shape the news, players must select which stories will be read on the air each evening.  At the start, minimal restrictions will be placed on the newscaster, but the game also provides minimal guidance as to possible impacts each story might have.  As time progresses, the player will need to stay under, meet, or exceed quotas, such as having a maximum of two stories, exactly three stories, or no less than one story.  Certain stories may also be bundled together, and burgeoning newscasters must choose one or the other for their nightly narrative.  One flaw of the game is that once a story is confirmed or declined, the decision is permanent, so players will want to stamp carefully, because once a story is included or excluded, there’s no turning back without loading a save.  Certain story types will be daily staples (generally those dealing with government and police) while the entertainment section and medical stories are randomised, so reloading often means having to make entirely different choices.  Subsequent playthroughs unlock a small desk computer which tracks the public’s feelings on various subjects.

At the end of two weeks, the player is presented with one of several outcomes; some are peaceful, others violent, but all result in the headliner moving on from their job, and a new headliner taking the reins.  This is how the game creates a New Game Plus of sorts, allowing the player to rewind back to the start of the story, and make different choices to see how it impacts those around them.  Once the player has completed their first two week cycle, an new policewoman NPC is unlocked, which triggers additional gameplay choices and news stories.

While a single run through the game only takes about two hours, with subsequent replays being closer to half that time, there’s enough choices and interactions between choices for the player to invest in multiple attempts to see the various endings and how each intertwines with the others.  For those interested in trying out a social manipulation game before diving into something as depressing as Papers, Please or for anyone who’s skirted visual novels in the past due to the deep time investment typically required, Headliner: NoviNews is a low-commitment entry point.

Curious to see Headliner: NoviNews in action?  Check out our Adventure Corner playthrough of it on our Twitch channel: