The Magister combines the rhythm of a Choose-Your-Own-Adventure novel with the luck of a card game.

Publisher Digerati and developer Nerdook Productions released a demo for deck-building murder-mystery RPG The Magister during PAX Online. The game features procedurally-generated characters and events, and is expected to be released soon.

Players control the titular Magister who has just arrived in town, looking to solve the murder of a fellow Magister. The game provides fourteen in-game days to solve the murder and apprehend the killer. While exploring the countryside, players will search for clues and interrogate witnesses and neighbors. Some locals will befriend the Magister, revealing secrets or perks as their bond deepens. However, other characters will not be as friendly. 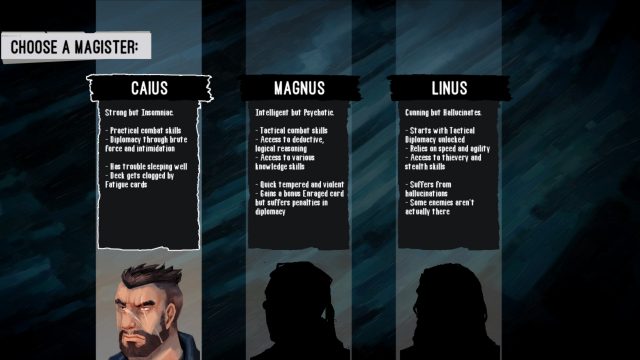 Each Magister has strengths and weaknesses, including hallucinating enemies or being a fanatical member of a church.

When encountering hostile persons or creatures, the player can resolve disputes with brute force in a turn-based battle or utilize tactical diplomacy to change hearts and minds. Both encounters are centered upon drawing cards: Ordinary battles use cards to trigger attacks and skills while diplomacy requires the player to use the cards to build empathy and lower the enemy’s rage.

Time advances when the player leaves each location, with some areas and sidequests only available during specific times of day or night. Optional events will appear at regular intervals, and the player can choose to expend that time to investigate or following other leads. Should players bypass these optional quests, the game will penalize the player with a negative status card to be used in the next encounter.

The Magister features pixel-art characters on watercolor-inspired backgrounds. The music was minimal but well-suited to the game’s moody atmosphere. The game is rather text-heavy, with some jarring font choices which will hopefully be addressed before its release. Battles felt limited by the types of cards I drew during the demo, which led to my preference for the diplomatic approach. The Magister combines the rhythm of a Choose-Your-Own-Adventure novel with the luck of a card game. Players looking to bring a killer to justice can expect to see The Magister on Steam in the near future.