Get in the Car, Loser! PAX West 2019 Impression

“I’ve got the Sword of Fate and there’s an ancient evil that needs to be sealed away!”

It’s been a thousand years since the Machine Devil was sealed away, and now they’re coming back.  It’s up to a trio, who’s liberated the sword of fate from the angels, to seal it back up — so, Get in the Car, Loser!  We’re going on a road trip with Love Conquers All Games to save the world. 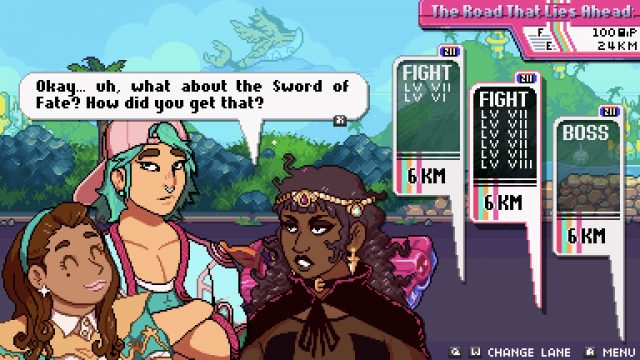 With a team of three, limited resources, and two thousand kilometers to drive, players will need to manage their resources carefully.  This includes everything from character health to gas for the car to a limited pool of money.  The highway has three lanes, each of which has its own events, both for encounters and storyline beats.  How each player chooses to drive — including avoiding or taking on encounters — will drastically change the flow of the trip.

Combat is a mix between dealing with cooldowns and timing, along with choosing the right equipment.  Val takes the role of tank, Grace is pure damage, and Sam is a flexible support character.  Each of the trio can equip trinkets to unlock attacks, though what types of attacks each holds varies between each character.  For example, the same trinket can hold a taunt for Val, a strong attack for Grace, and a healing spell for Sam.  Players can use the face buttons to activate each character, with each having their own cooldown, or flip to a new page of abilities, depending on the situation.  Flipping a page will immediately ready the next set of abilities, but the player will need to wait a noticeable amount of time before returning to that page.  So timing when to flip to a new page, moving away from key abilities like taunts and heals, is critical to surviving.

Enemies each have their own ranking, as well as a stagger bar, and both play an important role in deciding how to take on encounters.  Enemies with a higher rating than the player’s will do increasingly large amounts of damage; for example, an enemy rated at four against a player rated at one will do four times the damage.  Players with a rating two versus rating one enemies will do twice the damage, and so forth.  Stagger bars slowly fill as enemies are struck with attacks, and the stagger bar can be drastically increased by either ravage attacks by Sam or Grace using the sword of fate. 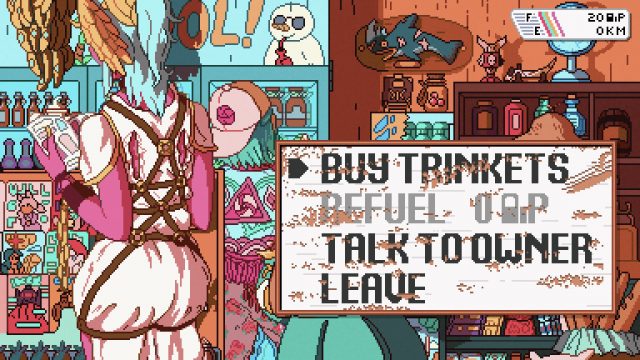 Get in the Car, Loser!’s latest demo has significantly more polish than the demo from last year’s PAX West, and with good reason: the game is getting close to release and is due on out PC via Steam in early 2020.  For those wishing to stay updated, the game can be wishlisted now.