Bandai Namco has released the opening cinematic for upcoming action RPG Code Vein. The fully-animated video is produced by the studio Ufotable and features the theme song “Underworld”, performed by VAMPS.

Bandai Namco also announced the limited Code Vein Revenant Bundle for North America. The bundle is exclusive to Bandai Namco’s online store, with those interested able to register for the waiting list. The bundle is priced at $99.95 and includes a phyiscal copy of the game for PlayStation 4 or Xbox One, a metal case, digital soundtrack and art book downloads, and a Mia Karnstein figure.

Code Vein is set in a post-apocalyptic world where a phenomenon called the Thorns of Judgment has laid waste to human civilisation. As a result of this phenomenon, surviving humans have gained supernatural abilities at the cost of severe bloodlust that can turn them into members of the mindless cannibalistic force wandering the world known as the Lost. The game will be released on September 27, 2019, for PC, PlayStation 4, and Xbox One. 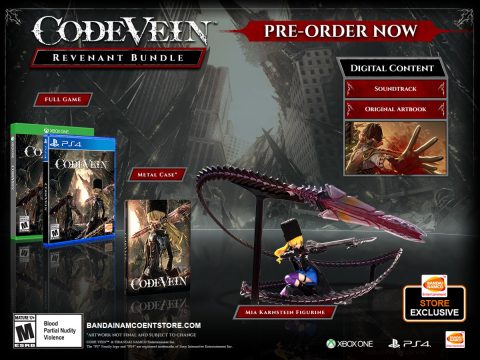