Sega held its first Japanese livestream for the newest entry in the Sakura Wars series, currently known under the working title Project Sakura Wars, this week. Included in the presentation were reveals of multiple characters, as well as locations and more details about the non-combat portion of the game.

The first character revealed is series mainstay Sumire Kanzaki. Former star of the Imperial Combat Revue: Floral Division, she is in overall charge of the Great Imperial Theater and its new Combat Revue, and appoints protagonist Seijuurou Kamiyama as the new commander of the Floral Division. The second character is Kaoru Rindou, who acts as Sumire’s secretary but is also a member of the Revue’s Wind division. She handles the finances and often acts as support during combat. 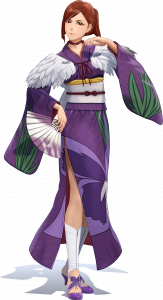 The third character is merchant Komachi Ooba. Hailing from Osaka, she runs the gift shop of the Theater, which stocks newspapers and other goods as well as the actors’ merchandise. She is also in charge of getting materials and acts as support during missions. The fourth and final character is Reiji Shiba. He is the head mechanic and a friend of Seijuurou since their time in the academy.

The presentation also showed off numerous parts of the Grand Imperial Theater that players will be able to access during the adventure parts of the game between missions, as well as revealing the Shouwageimaru airship. The airship, which is operated by the Wind division, transports the Floral Division and their Spiricle Fighter mechs to combat missions.

During adventure sections, various events will be available around the Theater and the neighbouring streets. Players can roam around the areas, heading to events marked on the map. Some will be necessary to advance the story, while others will be optional side events. There will also be numerous shiny points visible, where players can find clues for events or items. Some events will have a time limit to be successfully cleared.

In addition, the LIPS (Live & Interactive Picture System) present in previous entries will return in Project Sakura Wars. This system gives players limited time to select a response, which can affect the appropriate character’s Trust level as well as the story scenario. In addition to selecting an active response, players can choose to not respond in time, which is also considered a valid response. Players can also press up and down on the D-pad to choose how strong their response comes across.

Project Sakura Wars is being developed exclusively for PlayStation 4. The game is planned for release in Japan in winter 2019, with a western release confirmed for spring 2020.