Sega provided new details on Project Sakura Wars at this year’s TGS, introducing three more characters in the game and releasing two new Japanese trailers. In addition, Sega has announced an animated adaptation of the game. The animation is being produced by Sanzigen, which is also working on the opening movie and animated scenes for the game. The animated series will be broadcast on TV in Japan sometime in 2020.

Two of the new characters hail from the Berlin Combat Revue and its Schwarzschild division. The Berlin Combat Revue’s leader is Elise, who is dedicated to completing her missions and doesn’t talk much, but shows strong leadership in combat. She is also highly interested in Japanese culture. She is joined by Margarete, a child prodigy who serves as a tactician. She is often straightforward in her speech, and is know for planning risky operations that are said to only be possible for the highly organised Berlin Combat Revue. The two pilot Eisenjaeger mechs (or Spiricle Fighters), which focus on power and come with heavy armor. 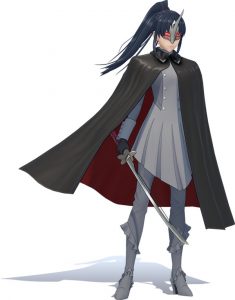 The third new character is called Yasha. The mysterious masked woman appears during the opening ceremony for the international contest between Combat Revues, and is looking for an item called the Imperial Key. She operates a puppet mech called the Shinmetsu, which is larger than Spiricle Fighters but has great agility.