Players are not heroes who are destined to save the world, but simply ordinary people who need to etch out a living in this harsh land.

Developed by Nine Dots Studio and Maximum Games and published by Deep Silver, Outward promises to give gamers an old-school adventure on their modern hardware; and in that, they largely succeeds. We have seen many new, retro-styled games please gamers when old-school mechanics are balanced properly with solid gameplay to form a compelling experience. Yet for better or worse, Outward chooses to feature many of the challenges and lacks most of the conveniences that RPGamers take for granted.

From the beginning, Outward lets the player know it means old-school business. The game begins with the player waking on a beach nearly naked, apparently left ashore after a shipwreck. Gathering survival supplies such as food, water, clothing, and a weapon becomes a priority. Outward does not hold the player’s hand, allowing them to suffer debuffs should the gamer choose to ignore basic life necessities. Players are not heroes who are destined to save the world, but simply ordinary people who need to etch out a living in this harsh land. Even a pair of wolves can make quick work of a new adventurer who does not respect their territory. 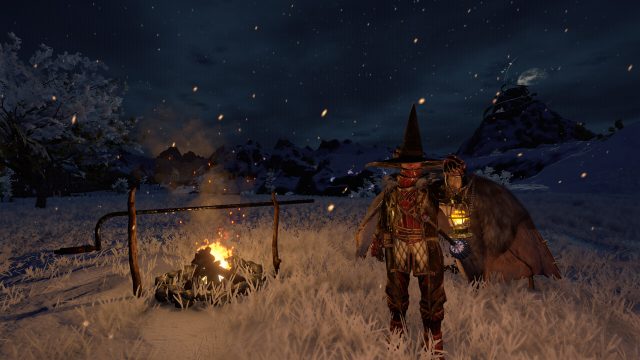 Preparing to camp for the night? Make sure you have plenty of food, water, and a warm tent or you may wake up with a nasty debuff.

Outward provides an open-world experience, allowing RPGamers to tackle challenges and quests in their own way. Early on, the town leader lets the player know that they must pay a rather large debt off in three days, or lose possession of the family lighthouse. The game allows the player to figure out how to come up with gold, while also providing some hints to alternative ways to resolve the debt. Making decisions plays a key role in the game.  For example, after learning how to wield magic, players must decide how much of their character’s precious health and stamina they will sacrifice for magical power. Decisions like this really draw players into the game.

Regardless of the approach the player chooses, life in Outward isn’t easy. A fight with wolves not only proves challenging for the ill-prepared, but may result in the character stuck with some sort of disease which will require a remedy to address. A robust crafting system exists whereby the player may create an antidote, cook food, improve weapons, and more. Recipes can be purchased from merchants; however, they cost quite a bit of coin. Alternatively, players can experiment and often discover recipes. Success saves the gold of purchasing the recipe, though failure may result in lost materials.

Preparation is key in Outward, as neglect in this area will lead to a quick death. The game features quite a few survival mechanics, including the need for sleep, hydration, food, and remedies for illnesses. Yet, these systems do not feel forced, nor do they dominate the game. Rather, they serve to draw players into this immersive open-world experience. Of course, rogues and monsters also post challenges. These forces can quickly overwhelm the warrior who forgets to upgrade his armor and bring a few potions for emergencies. Combat in Outward lacks the fluidity of games like Dark Souls III; however, since combat is not as much a focus as the entire journey is in Outward, it does not detract much from the overall enjoyment of the game. 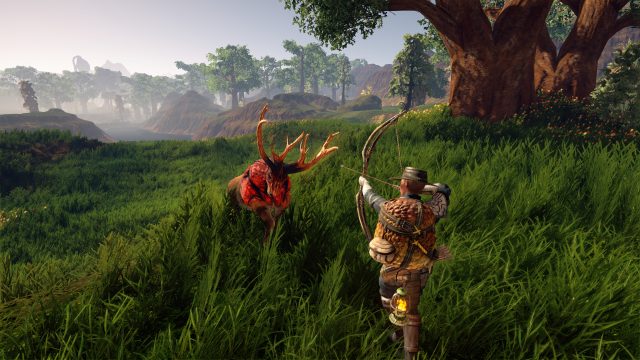 No one will mistake Outward for Horizon Zero Dawn. It’s best to stick to melee weapons and magic in this game.

Combat usually leads to death in most games, but not so for the protagonist of Outward. While he may need food, water, and the right clothing for the climate to avoid fainting, he will never die. When a character passes out from lack of health, he wakes up somewhere else depending on how he was knocked out. For example, if a couple of brigands did in our would-be adventurer, he will likely wake up a prisoner in their camp. Passing out on the road from poison may result in a kind-hearted traveler taking the warrior back to town where the would-be hero may wake up without any coins in his pouch. This system, along with the liberty afforded by the world, gives the game a Dungeons and Dragons vibe rarely felt in most modern games.

Despite the familiarity of the Dungeons and Dragons-like game, the inviting trails of Outward are not without a few issues. Voice acting is painfully limited, and the scripted dialogue will not win any awards. Indeed, the main plot feels thrown together and a bit stereotypical. Graphically, Outward does not push modern PCs or consoles in the slightest. Sounds are serviceable, and combat feels like something from a generation or two ago. Some players will also find the lack of fast travel and limited inventory space a large detraction from the overall experience.

Fans of games such as older Elder Scrolls titles and even Legend of Zelda: Breath of the Wild will likely find this an enjoyable experience. While Outward lacks the polish of those titles, it shares the vision of making a harsh, open-world experience into something memorable. It makes every victory feel like an accomplishment, and it allows the player to write their own story in a new and unforgiving land. And, for some, that is all they need from their RPGs to feel happily satisfied.