While a dark mystery is typically a fun one to solve, when the mystery becomes why everything is dark and what the words on screen say, annoyance replaces curiosity.

Fatbot Games’ steampunk dungeon crawler Vaporum was first released on the PC in September of 2017. Eighteen months later it was ported to consoles allowing me to try out this title on the PlayStation 4. While it has some interesting puzzles and a well-designed game world, the darkness of the entire game combined with certain gameplay mechanics forced me to wave the white flag a little before being halfway done with the adventure.

Vaporum begins with the sole protagonist waking up on a rocky seashore with no memories and nothing but an ominous tower nearby stretching skyward. With nothing else to do, the character enters the tower looking for answers. At this point, players take control, but this is where the first issue with the game arose. After entering the tower, the game gets dark. Not in a metaphoric way, rather in a lighting way. Turning up the brightness on the TV failed to help much, and in the end a FAQ was needed to find the wheels to turn to grant access through the first door.

While the adventuring got easier as I progressed through the game, lighting issues were a constant hinderance and repeatedly lead to my demise. More than a few times I found myself progressing nicely through floors of the tower only to fall into pits that caused instant death and a game over screen forcing me to return to my last save point. While the game game at least allows players to save at any point, the relative ease of the first floors belies the need to do so, causing such annoyances as breezing through large chunks of gameplay time only to suffer instant death in a hard-to-see pit. It’s an annoying reoccuring gameplay element made worse by lighting issues, and while I appreciate the fact that game is stylistically set in a dark tower, the darkness acts as more of a hindrance than anything. 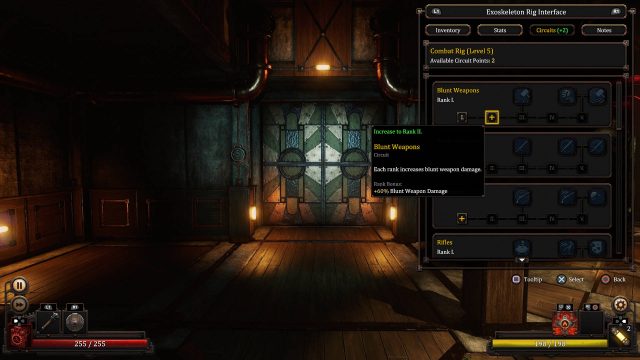 Everything is very dark, and the text takes up far too little real estate to read easily from the distance console gamers play from.

With all that said, I did complete a good bit of Vaporum before I eventually threw in the towel. After opening the first door and beginning the game proper, players are soon given the chance to outfit their character in an exo-skeleton suit called a “rig”. The rig selected is fixed from that point forward and acts similarly to a class selection. There’s the tank rig built for high defense, the glass cannon one built for higher physical offense, one for higher ranged attacks, etc. Having to make such a permanent decision within the first minutes is a tough call to make, but the game is designed to be relatively short and encourage multiple playthoughs and easy enough to determine within an hour or so if the chosen rig doesn’t match one’s play style and restart. Once the chosen rig is equipped, players move into the first floor of the tower and begin their mission to both reach the top and figure out who they are and why they’re there.

Gameplay in Vaporum consists of exploring the tall tower, solving puzzles, and looking for clues while battling monsters in real time as both players and enemies move on a grid. There aren’t many battles, nor are they very difficult on the low difficulty setting selected, with the main challenge coming from the puzzles on each floor. Many times wheels had to be turned, pipes had to be connected, weights had to be pressed, and hidden rooms had to be explored before the path to the next level was revealed. The puzzles are quite clever and rewarding to solve, never becoming overly complicated; most large floors can be cleared in easily under forty minutes. Exploring each floor brings rewards in terms of weapons, items, and voiced recordings that help to explain what the now-deserted tower was, what the people who once worked there were like, and help to build the world that Vaporum is set in. These are fascinating to listen to and searching each floor carefully for the myriad of hidden rooms becomes rewarding not just for extra loot, but for extra story.

Battles were relatively straightforward as the only options are to bash or shoot monsters while adhering to the grid-based movement system, but interacting with the environment and navigating menus isn’t nearly as intuitive. Vaporum was designed for PC and the port to PS4 left me wanting for the use of a mouse more than a few times. Nothing about the point-and-click nature of many gameplay elements are impossible to do with the DualShock controller, but it’s obvious that many systems simply weren’t designed or redesigned with it in mind. To open locked doors, menus have to be opened and keys don’t just have to be selected, they have to be moved to the lock. Pressured floor tiles need heavy items placed accurately upon them, a seemingly simple task that often takes far longer than necessary, especially when having to simultaneously battle enemies. These accuracy-based tasks would’ve been simple with a mouse, but are annoying to manage with a controller. 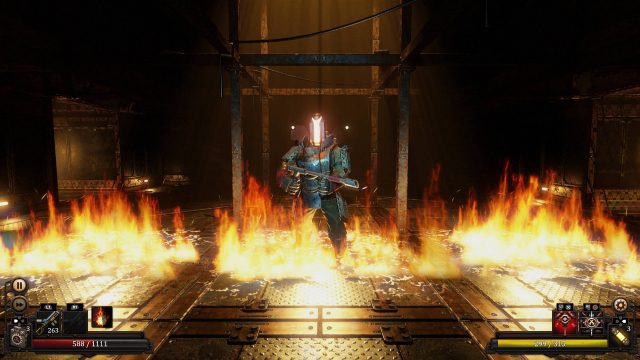 This guy probably isn’t going to be defeated by bashing him in close quarters with a pipe.

The last major issue I have with Vaporum is the size of the text both in menus and messages received. Often messages appear in the center of the screen, but the dialogue box and corresponding text are so small as to prevent me from reading them. I played on a 34″ television from less than ten feet away and even with my glasses on, most text couldn’t easily be read. Again, this was probably something that wasn’t an issue in a PC release, as gamers sit much closer to their screens, but for a console release this proved frustrating.

When the lighting is good, Vaporum is a nice-looking game. While the tower environment never seems to change much from floor to floor, always looking like one’s buried in the engine room of a massive submarine, this makes sense for the story and setting of the game. The sounds are equally matched to the setting with constant hums of machinery and hisses of steam being most of what is heard with a few ominous tunes sprinkled in here and there; mostly it’s very quiet, adding to the foreboding emptiness of the tower. Voice acting at the beginning of the story and in the aforementioned recordings is very well done.

Overall, Vaporum has a lot going for it, especially for fans of the old Myst games or Legend of Grimrock series, but doesn’t quite execute certain gameplay and design elements well enough to entice many others to give it a try. I enjoyed the story that was presented and was interested in where it was going, but eventually my enjoyment was hampered enough that I had to set it aside. While a dark mystery is typically a fun one to solve, when the mystery becomes why everything is dark and what the words on screen say, annoyance replaces curiosity.