While this expansion doesn’t fix all the issues of the base game, Donkey Kong Adventure does provide an enjoyable new world to explore for fans of the original.

Earlier this year when I reviewed Mario + Rabbids: Kingdom Battle, I thoroughly enjoyed the XCOM-inspired combat and found the Rabbids to be surprisingly entertaining companions for a tactical RPG. While it’s a strong early RPG on the Switch, I felt that the game could have used greater character and level variety with more meaningful customization. That’s where the new story DLC, Donkey Kong Adventure, enters the scene. While this expansion doesn’t fix all the issues of the base game, Donkey Kong Adventure does provide an enjoyable new world to explore for fans of the original.

Thanks to another unfortunate incident involving a unique washing machine, Beep-0, Rabbid Peach, and Rabbid Kong are transported to another dimension with more tropical climes. Unfortunately, Spawny has struck again, using his SupaMerge to populate this dimension with hostile Rabbids as well as creating “bad” bananas that give Rabbids extra strength. Now Beep-0 and Rabbid Peach must team up with Donkey Kong and Rabbid Cranky to keep Rabbid Kong from hoarding all the bananas of the world and find the missing parts to the washing machine so they can get back to the Mushroom Kingdom. Beep-0 is once again carrying the narrative load but is such an enjoyable character that this isn’t a problem. The story in Donkey Kong Adventure is fun in similar ways to the original: numerous references to Nintendo games combine with Rabbids hijinks to balance the tactical gameplay. The story is squeezed in-between the first and second world of Kingdom Battle — in fact, the first world must be completed before the DLC can be played — and conveniently Rabbid Peach loses her weapon on the trip to the alternate dimension so all the characters start from scratch in terms of weapons and character customization. 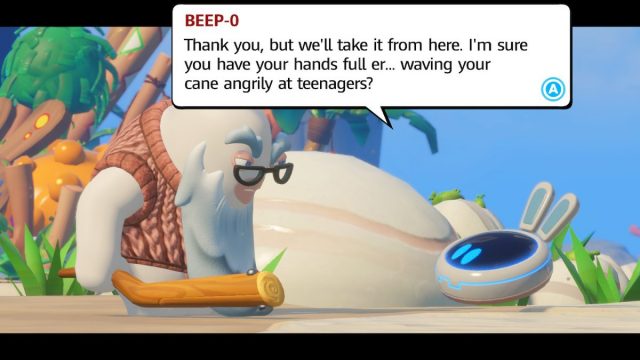 Beep-0 is just as entertaining as ever

The gameplay hasn’t radically changed from the base game. It’s still a mixture of tactical maps tied together with world traversal incorporating numerous collectibles to find and bananas to accumulate (replacing coins as the currency for weapon upgrades). Just like the original game, there is a wide variety of mostly optional puzzles to decipher including some completely new timed puzzles involving manipulation of a mine cart that are quite entertaining. The unique balance between exploration, puzzles, and combat is once again expertly pulled off.

The combat retains continuity with the original release, continuing to use the simplified hit percentage as well as the ability to do damage via dash attacks. The maps have undergone some tweaks to fit the lack of variety created by having only three playable characters. There are no longer two-part missions with HP carrying across between them; now health is refilled after completing each mission. While Rabbid Peach retains similar weaponry and abilities from the main game (including her ability as a healer), Donkey Kong uses a Bwananarang, a boomerang-like implement that can attack multiple enemies within range, and Rabbid Cranky uses a shotgun-type weapon that has a wide field of attack but does diminishing amounts of damage the further enemies are from him.

Since these options mean there is a lack of ranged attacks, the combat places an even greater emphasis on character movement and special abilities. Donkey Kong plays a starring role as his abilities, unsurprisingly, are perfectly suited to this new paradigm. He has the ability to pick up and throw enemies, blocks, as well as his compatriots. Many of the maps also have ramps emblazoned with “DK” that Donkey Kong can swing between. He also has the ability to play the bongos to lure enemies near him so he can do a ground-pound attack to hit multiple foes at once and Rabbid Cranky can put enemies to sleep with long, boring stories. These new wrinkles enable different strategies from the original game to attack enemies with. 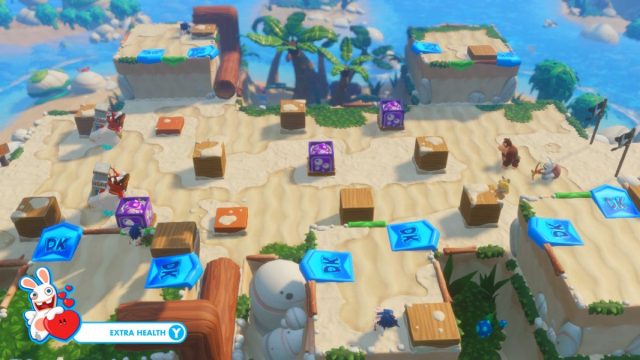 The DK platforms open up maps with movement options

The map design is varied, though on the small side to accommodate the three characters and lack of ranged units. Mission variety is also a strong suit of Donkey Kong Adventure, venturing outside the typical “kill everyone” mission-type to include levels focused on surviving waves of enemies, reclaiming stolen washing machine parts, destroying bad bananas, and preventing enemies from escaping the map. These missions do an excellent job of forcing players to use different strategies to accomplish their varied goals as well as keeping gameplay from getting stale.

The graphics look good, matching Mario + Rabbids in producing a colorful, vibrant world that’s interesting to explore for the six to eight hours it will take to complete the DLC. However, it’s hard not to be a bit disappointed by the music. The soundtrack is fine as background accompaniment, but it’s missing the sort of standout tracks that Mario + Rabbids had, especially to punctuate boss encounters. Perhaps my lack of Donkey Kong fandom means that I’m missing otherwise enjoyable references in the music, but I just found it to be bland. It’s also worth noting a crash impeded the final boss battle. It seems like an isolated incident, and little progress was lost thanks to the game’s autosave feature, but it came at a most inopportune time.

Donkey Kong Adventure is a perfectly solid addition to Mario + Rabbids. It’s fun to have another world to explore and the new puzzles were a welcome evolution. Unfortunately, while there are some small tweaks, there are no major corrections to the limitations of the original’s gameplay. Instead of bigger and more intricate maps with new enemies, Donkey Kong Adventure ends up being more of the same. That’s not a bad thing because the original was certainly enjoyable, but there is nothing to surprise or wow players. Nevertheless, I’ll take more of Beep-0 and XCOM-style gameplay however I can get it.