Phantom of the Mario

Crossovers are nothing new to the RPG scene. Recent years have given players Tokyo Mirage Sessions #FE, Project X Zone, and rarely does a year go by without a new Super Robot Wars game. So, a crossover between Nintendo and Ubisoft shouldn’t be that astounding, but combining the Mario universe with Rabbids in a XCOM-style tactical RPG wasn’t the obvious route to take. Nevertheless, Mario + Rabbids: Kingdom Battle combines these disparate elements into a surprisingly satisfying package.

Mario + Rabbids opens in the workshop of an inventor who has created a headset called the SupaMerge. This device allows any two items to be merged into a single product. At this point, the Rabbids show up in a time machine and begin raising havoc. Once one of the Rabbids — who is appropriately given the name Spawny — gets a hold of the SupaMerge, a combination of a Super Mario poster and the time machine creates the melding of Rabbids with the Mushroom Kingdom. Once these worlds are merged together, Bowser Jr. kidnaps Spawny to use for his own nefarious plans. Now the characters must band together to rescue Spawny and save the Mushroom Kingdom. While Mario would be expected to star in a game where he is the titular character, neither he nor the Rabbids are known for their verbosity, so the narrative is carried by Beep-0, an AI-infused robot that gets merged with a Rabbid. This turns out to be a great choice; Beep-0 is an excellent lead, commenting on the zaniness that occurs when these two worlds merge and expressing frustration at gaming annoyances like escort missions.

Beep-0 leads the group of playable characters — Mario, Luigi, Peach, and Yoshi, along with their Rabbid counterparts — through a set of four demented versions of Mario worlds. The game eschews the typical method of having battles shown on a map or being selectable from a menu. Instead, Mario + Rabbids incorporates the battle maps into a larger, explorable world. The game intersperses block puzzles, complicated pipe systems, and hidden treasures between the missions to break up the combat. Even though there is no platforming, the exploration between maps takes up a surprising amount of time, and the coin collecting and exploration make it feel like a Mario game. The four worlds are split into stages which are then generally comprised of two maps each. The player is graded at the end of each stage and awarded coins based on the speed that the maps were completed and whether any characters died in combat. At the end of each stage, health is replenished, so there are no worries about permadeath. However, because stages can have multiple maps, it can be a challenge in the earlier parts of a game if a character finishes the first map of a stage with low health. The stages themselves look appreciably like Mario levels, with blocks being used for cover and pipes acting as shortcuts to other parts of the map.

Each of the playable characters have a blaster-style primary weapon, as well as an area-of-effect secondary weapon that has a cooldown period before it can be used again. The characters are locked into the type of weapons they use; the only weapon customization comes from using coins to purchase more powerful weapons, potentially with extra effects. Status effects can play a large role in the strategy: Push, Bounce, and Burn can extricate enemies from cover; Ink, Freeze, and Stone can limit enemies’ ability to attack or use other techniques; and Honey can glue enemies in place. Most of the secondary weapons are explosive in nature: bazookas, grenades, and explosive drones allow for attacks when enemies are thoroughly entrenched in cover. Unfortunately, players can only target enemies directly with these secondary weapons, so it’s frustrating that a grenade can’t be placed right in the middle of a group of enemies to maximize damage. 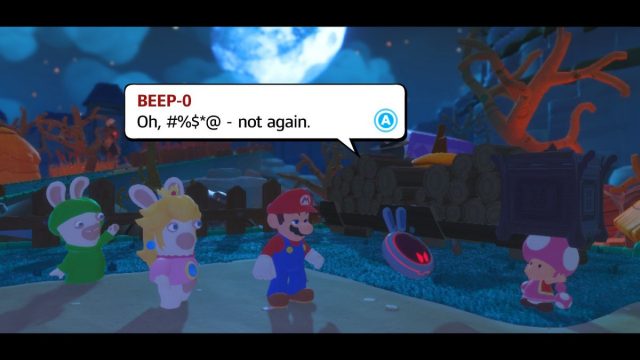 Beep-0 loves escort missions just as much as the average gamer.

The combat in Mario + Rabbids is obviously inspired by XCOM. The player’s team has only three members: Mario plus two of the player’s choosing. Each turn players can move as well as carry out an attack. Like in XCOM, cover is an important aspect to keep in mind, though the calculation of hit percentages has been simplified. There are half and full-height blocks scattered around each stage; characters behind half-height blocks have a fifty percent chance of being hit while ones behind full-height blocks are immune from blaster based attacks. This makes flanking enemies important as once a character is in direct line of sight, there is a one hundred percent chance of hitting them. This simplification of hit percentages feels like an improvement on XCOM, as it makes things a lot clearer. This obviously places a focus on movement in Mario + Rabbids, which introduces dash attacks, where the character can do damage to an enemy by sliding into them. Plotting a path where characters can dash attack as many enemies as possible and end up in cover while flanking enemies is a large part of the strategy. Characters also can use teammates as a springboard to jump to higher areas or reach further areas of the map than by running alone, but Mario is the only character that is able to damage enemies by jumping on them — it is his trademark move after all.

There are a variety of Rabbid-style enemies: plain Ziggy shooters, lumbering Smashers that will charge when attacked, and Supporters that must be dealt with quickly before their combination of healing and grenade chucking become an issue. Each world has unique enemy designs and new classes appear with regularity to keep players on their toes. Boss battles punctuate the middle and end of each world. The boss battles mix up the typical gameplay formula; dash attacks don’t work, there will be an element that must be triggered before damage can be done to the boss, and the boss’ HP must be taken down to zero three times before victory — another reminder that this is a Mario game.

Leveling in Mario + Rabbids is accomplished by spending power orbs, accumulated by completing missions as well as from hidden treasure boxes, on abilities in the skill tree. Each character has unique abilities, such as Hero Sight — this game’s version of overwatch, healing abilities, damage shields, and other boosts. While initially there appears to be many ways to customize characters, by the end of the game, the player will acquire enough power orbs to max out most of the abilities. There aren’t any decisions in leveling that dramatically change the way that individual characters play. However, the characters themselves play quite differently from each other and combining their abilities with the unique weapons allows for some interesting strategies to be employed. It’s incredibly satisfying to set up a trap involving Hero Sight and watch enemies die when the trap is sprung. 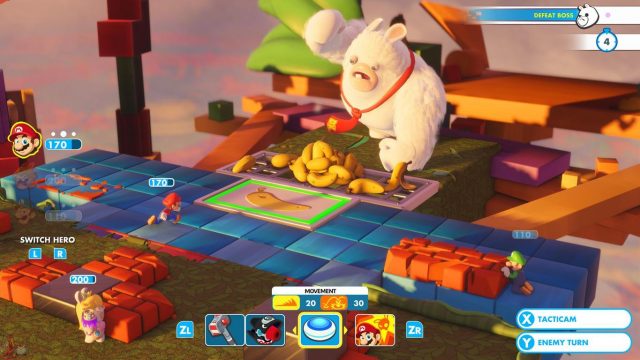 Bet this is more fun than being on top of some skyscraper.

The biggest compliment that can be paid to the graphics is that it looks like a Mario game. The worlds are colorful and vibrant, and the creators did an excellent job of capturing the essence of 3D Mario games. The four worlds are distinct, with grassland, desert, Arctic, and volanic-inspired worlds. Each of these worlds has unique environmental effects on missions that tie in with gameplay. The music also does an effective job of evoking the essence of Mario while still charting its own course. The boss themes stand out from the rest of the soundtrack, effectively punctuating these struggles. The Phantom’s Theme in particular, a several-minute-long operatic takedown of Mario, is simply hilarious. Mario + Rabbids also includes significant amounts of extra content with hidden maps that can be found in previous worlds and a two-player versus mode where teams of three characters battle back and forth in alternating turns.

There are a few niggling issues. The scale of the game can be a bit stifling at times; only having three characters that are controllable gets in the way of experimentation. Since Mario is required to be in the party at all times, it is easy to fall into the trap of playing with the same party over and over again. While it’s admirable that new content and characters are spaced out across the game, it means that Yoshi gets shortchanged, appearing just a few missions before the ending. The Mario requirement is also a pain if he dies during a mission that doesn’t restore health afterwards, forcing the player to limp through the following mission starting with only ten hit points. Also, there could have been more varied environments and considering the scope of the Mario universe, it’s a shame that the game only includes four Mario characters.

Nevertheless, Mario + Rabbids is an incredibly welcome surprise. I assumed that a game starring Rabbids would become grating long before completion, but my fears turned out to be unsubstantiated. Beep-0 is a great lead character, and the Rabbids’ hijinks are dialed back to a level that works. This is a fun take on a tactical RPG; the simplification of hit percentages worked especially well. The game isn’t without fault — greater variety in characters and levels along with more meaningful customization would be welcome — but most of the issues are minor in comparison to how much fun the game is to play. Hopefully Mario + Rabbids marks the beginning of a new series and a sequel will take these ideas further. 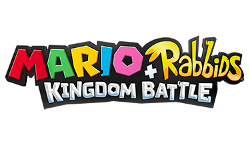