They Did it All for the Clothing

Zwei: The Arges Adventure follows Pokkle and Pipiro, step-siblings in a sleepy, close-knit town. One day a mysterious masked man appears in the village and steals the town’s sacred treasures, prompting the pair to go out on an epic adventure to retrieve them (and to earn the cash reward, which Pipiro intends to use to buy new clothes). Although the plot is a lot more barebones than The Ilvard Insurrection, the character dynamics between Pokkle and Pipiro are terrific and the town of Arges is populated with a great slew of charming characters.

The gameplay of The Arges Adventure shares a lot of the same features as its sequel. Players take control of Pokkle and Pipiro and can switch between them on the fly. Pokkle performs a melee dash attack, rushing forward to strike before returning to where he started, while Pipiro can use a variety of magical attacks. As the game progresses, players will gain the ability to use a variety of different elemental spells, each of which has a different range of effect and does more damage to enemies that are weak to them. New elemental spells also unlock new areas, allowing players to progress. Though it’s a simple system, the variety of spells combined with the often frantic combat and great boss battles help keep it engaging, but it does take a bit to really get going. 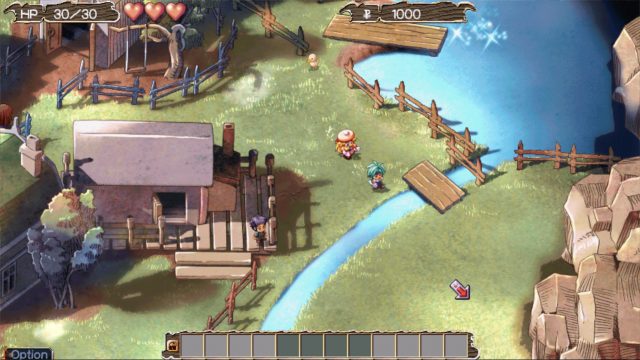 The town of Arges is simple but beautiful.

Progression is a lot less straightforward than most RPGs. There’s very little direction given, and instead players will need to explore the various dungeons and see which paths are open and what lies at the end. The only real guidance players have are a few story queues and little signs in front of each path that provide a suggested level. The experience system is equally unusual: rather than gaining experience by fighting monsters or completing dungeons, Pokkle and Pipiro level up when they’ve eaten enough. Every piece of food in the game provides a bit of experience, and ten of one can be traded in for a single upgraded version that offers more experience than the individual pieces would have together. Food also doubles as the game’s primary method of healing, so players will have to decide whether they want to save their food for a trade-in, or if they need to eat it now to stay alive.

There is also a variety of equipment that can be collected, and it plays an interesting role in item management. While each piece provides a nice stat bonus, each one also takes up a slot in the game’s item bar. In order to use food items in combat, they also need to be equipped to the item bar. During most of the game this doesn’t really matter that much, but during boss fights, players may need to choose to remove some equipment in order to take an extra healing item or two into battle, as one extra health recovery could mean the difference between victory and defeat. Players can also take on a pet, either a cat or a dog, which can join them in battle or go off on adventures on its own, collecting items for Pokkle and Pipiro to use on their travels. 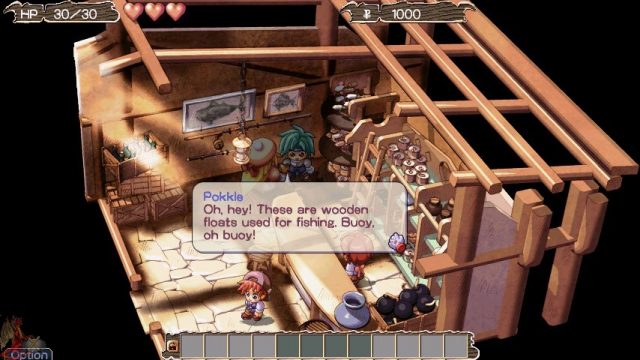 Look at that stupid grin!

Easily the most standout aspect of The Arges Adventure is its visual design. Unlike The Ilvard Insurrection, Arges is entirely two-dimensional, with great looking sprites and simple, beautiful environments. The character designs have the same charming nature that made The Ilvard Insurrection so enjoyable. The dungeons suffer from a bit of visual repetition, but each separate environment is distinct and well-imagined. The music helps bring it all together with a variety of catchy, peppy tracks.

While notably simpler than The Ilvard Insurrection, Zwei: The Arges Adventure still manages to hold its own as a short, enjoyable RPG experience. Clocking in at just under twenty hours, the game is brief, but there are a number of optional dungeons for players who want to explore the world a bit further. Although its simpler story and combat keep it from matching last year’s game, that’s also what you would hope to expect from seven years of innovation and technology.