The ending of the original White Knight Chronicles made it abundantly clear that those hoping to see a conclusion to the story of Leonard and his companions would have to wait until a sequel was made. Unfortunately, those who waited with the hope of seeing a good payoff in White Knight Chronicles II are likely to be deeply let down by its lazy storytelling combined with a lack of new features and more tedious sidequesting. White Knight Chronicles II does take the unusual step of including the entire first game on the disc, and manages to blend the games together almost seamlessly. This seamless integration, however, also serves as the first indicator that not all that much has changed, and those hoping for widespread improvements made between the two games are likely to find themselves severely underwhelmed.

Players are given the option to start from either the beginning of the first game, the beginning of the second game (with all character levels set to thirty-five), or to import their original White Knight Chronicles clear data. With the option to start from the first game, White Knight Chronicles II assumes that new players will choose this route, and hence no real attempt is made to slowly introduce players to the game should they decide not to. Outside of the rather dull introduction, the story somehow avoids reminding players of any story specifics, expecting everyone to remember the details when thrown into the middle of a quickly-resolved civil war, before the tale of Leonard and his companions continues.

Naturally the similarity between the games means that players of the first game will know exactly what to expect from the MMO-esque battle system. Controlling one member out of the three active participants, players use an attack, skill, or item every few seconds while freely roaming an area. Skills are used by selecting them from a personalized list, and come in a variety of forms. Physical attacks fall under one of three damage types, while there is also the option to learn spells in both elemental and healing magic. The leveling process offers players a great amount of choice in advancing the characters and choosing new skills, meaning the party can be built in any way desired. While perhaps not spectacular, the battle system works well and is fun to use, although certain tasks such as healing or swapping characters mid-battle can be awkward to get the hang of.

Some need for thought on the battlefield is generated by having enemies be weak or strong to certain types of damage. Unfortunately, the variation in enemies encountered relies a lot on the reuse of enemy designs, and these palette-swapped foes tend to retain the weaknesses of their brethren. The result is that tactics become nothing more than simply recalling the best type of attack to use on that type of enemy and repeating. White Knight Chronicles II does provide a bit a variation from other RPGs by allowing certain party members to transform into an Incorruptus once they deal or receive enough damage to fill up an onscreen bar. Incorruptus are large mecha-like warriors that come into their own when taking on the various large enemies that the game will throw at players. Despite the novel enjoyment that comes from controlling twenty-foot giants, however, these fights often devolve into using the same tactics as every other fight, somewhat limiting the potential. 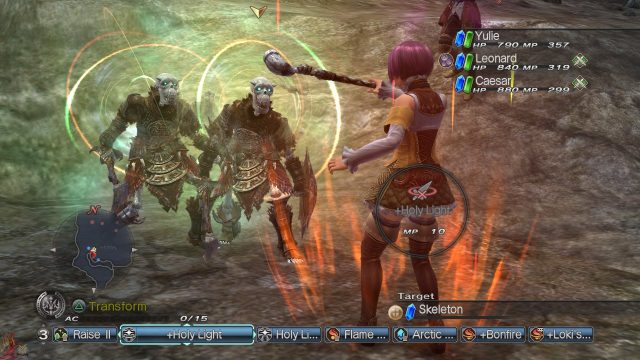 While nowhere near perfect, White Knight Chronicles’ story had a certain charm to it. Unfortunately, said charm is in very short supply for the second entry. The story has taken a distinct step backwards, struggling to make any sense even at the best of times. On top of this, a textbook show of lazy storytelling neglects establishing any sort of emotional bond to events in the story. Regrettably, White Knight Chronicles II also lacks much inspiration in providing effective impetus behind traveling to the next plot point; over half the game is spent following the exact same route previously taken by Leonard and his companions, only in reverse. This already-annoying task is made worse by the complete failure of the story to supply a good reason for it. Time-travel is also incorporated for no apparent reason other than an excuse to collect plot coupons, and only provides more unanswered questions in a disappointing theme that runs throughout the game.

The characters at least retain their likeability from the first game, but any opportunity for further development is either glossed over or completely ignored. Any hopes of the various relationships between the characters established from the previous game being further developed go almost completely unrewarded. This lack of extra charactization is made even more galling by the lack of new characters, with those having any remote remote impact upon the story being countable on one hand. Players are also given the opportunity to create their own custom character (or import the one they created for the first game) using the robust and impressive system that also created the various NPCs. Once again, however, this custom character serves no purpose in the story other to make up the numbers when party members are absent for various reasons or occasionally stand around blankly in cutscenes.

Outside of the main story, players have the opportunity to undertake various sidequests in the same way as the first game. These sidequests are split into three types: “errands,” “bounties,” and “quests.” Errands see players undertaking various tasks for the NPCs throughout the world, which almost always consist of either repeated running back and forth between two or more of these people, or delivering a specific item to them. Bounties are the fairly self-explanatory task of finding and killing certain monsters. Quests are often similar to those that can be found in MMOs and these make up the bulk of the online experience. While quests can be played solo using Leonard’s party it is highly recommended to tackle them online, if only to help reduce the tedium. All of the sidequests are affected by this tedium, since they usually consist of carrying out the same monotonous action repeatedly. Conversations featured in some of the sidequsts can offer a nice touch that helps give a bit of life to this world, but aside from providing completionists something to do, the rewards simply aren’t worth it.

The part of the game most likely to retain its fans is the online component. Players take their created character onto the Geonet, where they can participate in quests with others, as well as visiting the towns created by users. These towns are surprisingly fun to develop and can be improved upon by populating them with NPCs from other locales throughout the world, while also unlocking better equipment and items within town shops. These towns also become useful in the single-player game as they can be accessed from any save point, allowing players to restock supplies without traipsing back and forth. The online component has a new feature in the form of a customizable Incorruptus for the player character, but it can only be unlocked late in the single player game, probably to prevent a certain boss from becoming too easy. Some quests have also seen the limit on participants being upped from four to six, allowing more friends to join together in monster-slaying. It is worth saying the difference in enjoyment between undertaking the quests solo and with others is very significant, but on the whole it’s another area where updates to the gameplay are highly limited. 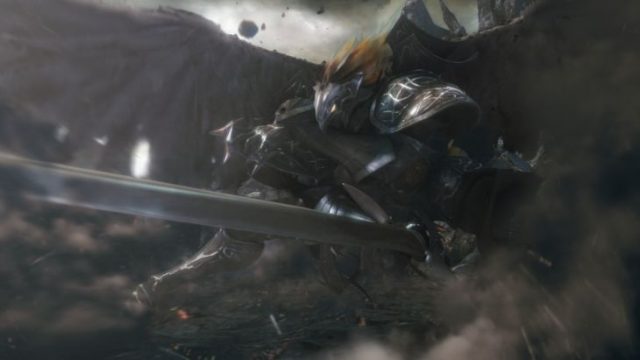 I wonder if it’ll be friends with me?

One of the strongest components of the first game came from its visuals, and the sequel has seen fit to keep all the graphics virtually the same. While the existing town, dungeon and character designs have effectively been copy-and-pasted into White Knight Chronicles II, it’s a minor complaint as they are still excellent and very pleasing to observe. It is disappointing, however, that there are so few new areas, as the new architecture and designs continue to create an excellent aesthetic, so it’s a shame there couldn’t be more. The character creator also helps breathe life into the visuals, being used to populate the world and provide realistically active towns with varied inhabitants.

Musically, White Knight Chronicles II also retains the very high quality of the original. Admittedly only a handful of tracks stand out as particualrly memorable divorced from the game, but the score does an excellent job of keeping the background interesting and creating a good feel for the scenes and locations. On the voice acting front, there is a feeling that despite still being strong, it sometimes isn’t quite on par with the first game. It is very likely, however, that a good deal of the blame can be placed on the drop in story quality that the actors had to deal with. On a whole, the localization, despite the poor story, is quite good, even including the occasional NPC sneaking in a pop culture reference as a small reward for exploration.

Difficulty has been ramped up a bit for White Knight Chronicles II, most notably in boss battles, as well as large creatures that wander the various locales of the game. The difficulty increase is varyingly successful. Although welcome for the boss fights, which now provide a challenge, with the larger creatures there’s not enough increase in their firepower to cause concern and the larger HP totals only serve to make each fight more of a grind. The game is relatively easy on party wipeouts, allowing players to return from the last save point with accomplishments intact at a negligible cost to experience. Players will be looking at about thirty hours to complete the main story, after which a New Game+ mode and some challenging additional quests are unlocked.

Perhaps White Knight Chronicles II can be best considered a very large expansion of the first game. Those looking for an MMO-esque experience on consoles, as well as those looking for more of the same in the online component, may well find the gameplay and battle system to their liking. On the other hand, the main single-player portion refuses to build at all on an already mediocre first game and completely fails in its task to provide a satisfactory conclusion to the story set up in White Knight Chronicles. In the end the very few new additions fail to come close to making up for the overriding sense of disappointment prevalent throughout the game.