Hello Earth! Can You Hear Me?

French developer Spiders has sustained a relatively prolific output of RPGs over the past few years, with many of its titles apparently trying to emulate the successes of BioWare and CD Project RED, with variable results. Its latest entry, The Technomancer, returns the developer to one of its most interesting settings and is perhaps its most solid effort so far. Although almost every aspect has been done in more depth elsewhere, its narrower scope allows the game to stand up well as a title for players to just sit back and enjoy without being overwhelmed like the big budget titles have the propensity to do.

The game is a sequel to Spiders’ earlier Martian RPG, Mars: War Logs, though no knowledge of the prior game is needed. Although humans were initially successful at colonising the red planet, things haven’t proceeded smoothly since. An event known as the Turmoil shattered the political situation on Mars, leaving it cut off from Earth and divided into nations formed from the corporations that supplied its people with water. As a newly initiated technomancer — a select group made up of those who have the power to harness electricity — Zachariah has two main goals to uphold: protecting the secret of the technomancers and finding a way to contact Earth. These two missions form the overarching plot, with an antagonistic colonel from Zachariah’s home corporation of Abundance doing everything he can to weed out the secret as well as stamping his authority over Abundance during its conflict with neighbouring Aurora.

Spiders’ previous effort, Bound by Flame, was marred by its attempt to tell a grandiose story without any of the resources to handle it. The Technomancer doesn’t make that same mistake, shooting for a much more engaging story with a more localised scope that fits well with the rest of the game. While this does mean that the game lacks any large-scale showdowns, it still does a good job at providing plenty of intriguing plot threads and wrapping them up nicely. Mars as a setting works well too, providing RPGamers with a distinct political situation that has resulted from the scarcity of water and the deadly radiation that beats down from the open sun. There is room for the scope to grow, as players have only been treated to a limited view of the locations on Mars in the two games so far, and though the ending wraps up the game well, it certainly leaves things open for another visit down the line. 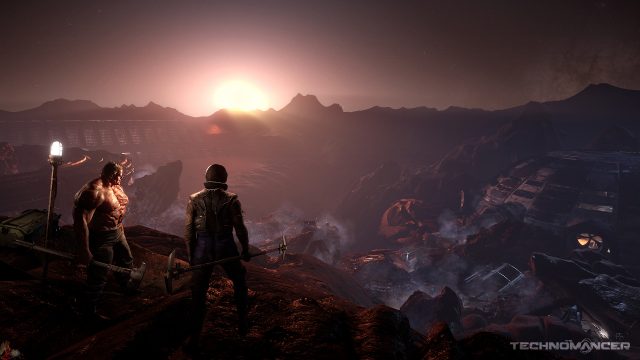 It is the red planet after all.

Combat has a solid base to it. Players have access to three combat styles — a more tank-based shield and mace, the aggressive two-handed staff, and the roguish knife and pistol — as well as an assortment of electrical technomancy powers. While it starts out with solid aspects such as dodging, the main problem is that it doesn’t evolve as progress is made. There aren’t enough interesting skills to learn and the progression system doesn’t give enough for players to improve more than one combat style despite the ability to switch between them on the fly. Going all out on attacks is a surefire way to failure as enemies hit very hard, but tactics don’t need to be advanced.

As well as its lack of evolution, repetition is also added from the respawning encounters that players run into (especially when returning to the city of Ophir after the first chapter). While less of an annoyance when doing multiple quests at once, it can get frustrating to have to face the same five encounters again and again while going back and forth. There are a few boss fights, though these aren’t all that different from regular encounters. Zachariah can give general orders to the two companions accompanying him, though their effectiveness is such that they just serve as a distraction to enemies until Zachariah can get to them. There’s a lot to like about the fundamentals and overall feel of combat, but the game would have benefited greatly from being able to offer some more variation in a lot of its areas.

Since players are able to customise Zachariah’s appearance, and the ability to play as a female character was included in Bound by Flame, it’s a little disappointing that the option is not present here. There are no roadblocks in the story or setting to prevent it so the decision appears to have been taken just for resource considerations. Zachariah has the usual WRPG set of attributes and talents, such as strength and agility for the former and charisma and lockpicking for the latter, that can be increased with points awarded at certain levels. These can come up in quests, with a high charisma unlocking conversation options that can avoid a potential conflict. There is a good assortment of quests and most of these tie in decently with the main questlines. Quite a few offer different methods of accomplishment, although none of the individual quests or conversation trees within are particularly intricate. Each of Zachariah’s five potential companions gets their own sidequests, more often than not allowing the player insight into their backstories, and these are the most interesting voluntary objectives. These quests also let Zachariah build his relationship with them, with three of them (one male, two female) leading to possible romance, though getting them to that point is very straightforward. 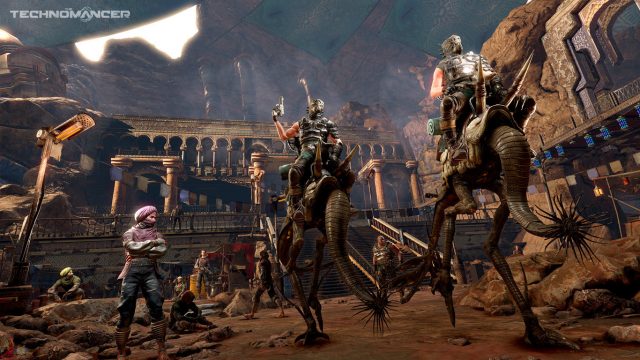 Ostriches have adapted quickly to life on Mars.

The Technomancer continues to make use of Spiders’ usual crafting system, which allows players to enhance weapons and armour with attachments as well as making various usable items such as healing kits and exploding traps. While perfectly functional and useful, this aspect has been done to greater depth elsewhere. There’s also a bit of disappointment in the generic nature of the loot throughout the game. Interesting items are extremely limited and the way that loot is balanced means players are rarely going to find reason to swap out their equipment.

Having already mentioned Mars being an interesting setting narratively, Spiders deserves credit for making it an interesting one visually as well. There’s a nice mixture of architectures from the domes in various states of disrepair from the original colonies to those that have expended out in the wilderness, which is also home to some rather fascinating creatures. Soundwise, the game is generally of high quality. The atmospheric music tracks do a good job of complementing the visuals without standing out too much and the voice-acting is solid throughout.

How The Technomancer is received by players is going to depend on their expectations. The game certainly isn’t at the level of the top-end western RPGs and a lot of its gameplay elements have been done in greater depth elsewhere. However, sometimes a lighter game is what’s wanted, and for those looking for a less overwhelming experience that’s easy to just pick up and play, The Technomancer is a solid and enjoyable experience for the twenty-five or so hours a playthrough lasts. 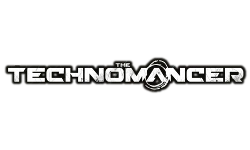