The Legend of Heroes: Trails of Cold Steel PS4 Review

If, like me, you’ve been hiding out under a rock for the last four years and have completely missed both releases in the Trails of Cold Steel arm of the Legend of Heroes franchise, then the PlayStation 4-exclusive HD remaster of The Legend of Heroes: Trails of Cold Steel is here to take away any excuses for not experiencing this JRPG masterpiece. The game is a triumph in world-building and character-driven storytelling, and its combat system is versatile enough to support it through its mammoth eighty-plus-hour runtime. With the third installment soon releasing for the first time in western markets, now is a good time to get caught up on the epic saga.

Trails of Cold Steel tells the story of an ensemble cast of young heroes, lead by protagonist Rean Schwarzer, who are newly enrolled at the prestigious Thors Military Academy in the country of Erebonia. Upon arriving to begin their education at the academy, the students are informed that they’ve been chosen to make up the newly-created Class VII, an experimental academy program providing its carefully-selected members a wholly unique curriculum. The academy isn’t just window dressing, either; its instructors and student body are part of the game’s grandiose supporting cast, complemented by various Erebonian politicians, royalty, and Class VII’s own families, where even the school custodian and local pawn shop owner have their own side story arcs that can be followed if the player so chooses.

Following Class VII throughout their school year and taking part in lectures, practical exams, academy functions, and field studies — monthly trips to various locations around Erebonia to become familiar with its different cultures and political conflicts — make up the meat of the game, and leave it feeling quite different from other RPGs involving heroes devoted to saving the world. Class VII isn’t made up of established warriors and legendary heroes; its students struggle to make an impact as they navigate Erebonia’s complex socio-economic class system, become sucked into the struggle between the country’s Noble and Reformist political factions, and fight against the Imperial Liberation Front’s terrorist activities. 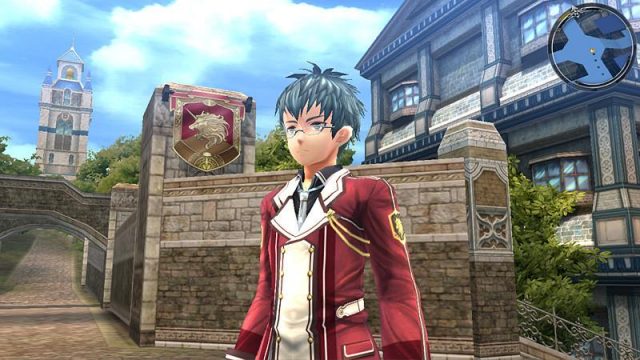 The world design is some of the most meticulous out there, creating spaces that truly feel constructed with purpose.

To call the world of Trails of Cold Steel sweeping would be selling it short. This is simultaneously one of the game’s best and most intimidating features; there are frequent and lengthy sections of gameplay devoted to nothing but student life breaking up the more combat-oriented field studies, and the game makes it clear early on that it will move at the pace its designers have deemed best. One cannot go into a session of Trails of Cold Steel with the goal of moving the story along; rather, it’s best to surrender to fact that the game’s world has a story to tell, and will move forward when it’s ready to do so, gently pulling the player along. If anything, it’s entirely possible to slow proceedings down even further by getting lost in reading the collectable installments of one of two in-game novellas, or catching up with the latest news and political goings-on in Erebonia and from afar by perusing the nation’s newspaper, The Imperial Chronicle.

Each chapter features multiple optional quests designed purely to gives closer looks at specific locations, character relationships, or other intriguing bits of lore, completely separate from the main plot. While on campus at Thors, spending bonding points will let the player activate event scenes with other characters of their choice, furthering individual threads of relationship-building narrative; there’s even a local radio station Rean tunes in to each chapter that catches him and the player up on national events. While this isn’t going to be for everyone, it’s a one-of-a-kind sensation to be carried along on waves of narrative, where even the more traditional combat sections hold surprising story twists and turns. Those who fight against the current will wonder what all the fuss is about, but those who give the world its proper time to breathe will enjoy a perfectly crafted behemoth of what’s essentially an introduction to a much larger work of fiction.

Trails of Cold Steel uses a very similar turn-based combat system to other entries in the Legend of Heroes series, with potential actions here arranged in the form of a command wheel. Characters can attack with their distinct individual weapon types, perform special Craft moves, and equip Quartz that bolster stats and allow access to magical Arts abilities. Crafts and Arts utilize separate meters that must be managed, and at various points in the story characters gain access to more powerful S-Breaks, which push them up in the current turn order but deplete all remaining Craft Points. There’s a lot of versatility that comes with this system, and the battle party is constantly in flux thanks to the field studies which split Class VII up into predetermined teams each chapter; the constant re-equipping of gear and powerful Quartz crystals due to characters leaving the party for extended periods of time does become a bit of a hassle at some point. The player is given more flexibility in constructing a party during the school-life sections of each chapter, which always contain one required dungeon mission to investigate an abandoned schoolhouse building in a remote corner of the campus.

Newcomers to the franchise may find the number of combat actions and meters a bit overwhelming at first, but there comes a point when everything “clicks”, letting players handle even stacked odds quite adeptly going forward. While the game is generally fairly middle-of-the-road challenge-wise, it isn’t shy about unexpectedly throwing back-to-back boss encounters at the player in some chapters, wholly without warning. Some late-game boss encounters, however, can be quite challenging even for a fully-leveled party. Even benched characters gain experience after battle, and the player is further tasked with developing combat links between pairs of characters, letting them perform extra maneuvers depending on their link level, which grows over time as characters are paired up together. 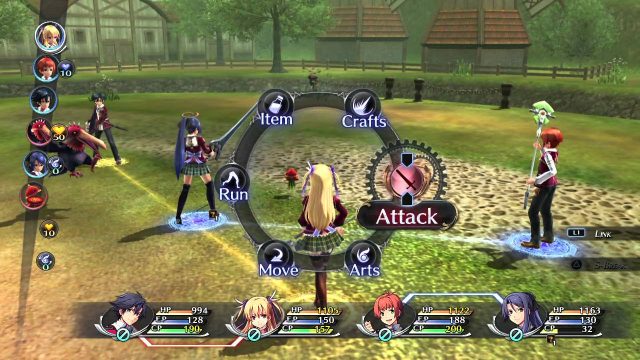 Arts, Crafts, S-Breaks, combat links — they all come together to make battles smooth and fluid.

As impressive as the world and narrative are, as well-designed as the combat is, they are much the same as the game’s iteration in the previous console generation. The PlayStation 4 version sweetens the deal by providing some visual and aural upgrades in the form of 4K 60 FPS support and expanded voice-over options in the form of Japanese language support and 50% more spoken English dialog. While there are less awkward gaps in English voiced dialog from the original Vita release, they do still exist — even leaving a character entirely unvoiced in an otherwise voiced scene in a very few isolated cases. But the additional voice recordings are a welcome addition, as the vocal cast is of extremely high quality. Likewise, music is well-composed, though it does lack the punch of a truly ear-catching track or two. The graphical upgrades are present, but won’t be extremely noticeable to most gamers, particularly since Trails of Cold Steel doesn’t feature a photo-realistic aesthetic and already looked great on past-gen hardware. The area where the visuals shine most is the absolutely meticulous world design present in each and every location in the game. Thors Academy and its neighboring town of Trista, as well as the locations the students of Class VII travel to during their field studies — be they regal palaces or busy metropolitan shopping districts — are created from the ground up in painstaking detail that never ceases to impress. The gargantuan cast of characters, too, enjoys a similar level of attention, all contributing to a wider world that simply begs to be indulged in.

There are plenty of players who only recently played through Trails of Cold Steel‘s first release and may not be swayed to do so again by the promise of better graphics, particularly given the polish already present on its initial launch. But the additional voiced dialog and improved performance due to better hardware can’t be understated. The option to switch into Turbo Mode for movement and combat is also a welcome time saver. Most importantly, though, it was and still is an absolute must-play for any JRPG fan, and a master class in slow-burn world-building that should be mandatory gaming, and if a modern-hardware remaster puts it into the hands of even more gamers, I can’t help but be all for it. If the original release was already a modern classic, then this improved version is nothing short of a masterpiece.