The Elder Scrolls V: Skyrim starts off with a bang. During the intro and character creation process, it is shown that the player is a captive of the Imperial forces and is being led to the chopping block for execution. As a soldier forces the player down onto the executioner’s block all Hell breaks loose. A dragon swoops down and begins destroying the city, giving the player a chance to escape. This escape sequence serves as a tutorial before opening up the world for exploration, and thus begins the latest Elder Scrolls adventure.

Those who have played Oblivion, or either of the most recent Fallout games, will be right at home with the console controls here. It follows the same first-person perspective of those titles while again presenting an optional third-person viewpoint. Players attack, jump, or cast all in real time via a rather simple interface that allows for a lot of diversity in play styles. There are times when the first-person perspective makes combat a bit chaotic, especially during fights in crowded areas or tight spaces. Also, aiming can be inaccurate for those not used to first-person style gameplay, but battle is never unmanageable.

Skyrim makes things more convenient by allowing players to equip any type of weapon, armor, or spells. There is even a favorites menu where players can set up weapons or spells to jump to without having to dig into the inventory. This means that players can quickly swap from their bow and arrow combination to a sword and shield pairing with very few button presses. Players can mix and match however they see fit, so having a stealth character ready to drive a dagger into the back of a waiting enemy is just as easy to make as a hardened warrior or battle mage, as there are no set classes here. 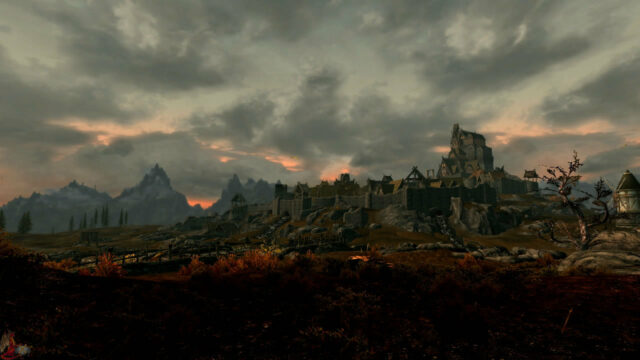 Wake up on a beautiful morning

Despite not having classes, there are still lots of ways players can create a unique character. Each of the playable races comes equipped with its own specific ability, and then play style determines how the character progresses. Want to be a knight? Just wear heavy armor and use a sword and shield. Want to modify that into a paladin? Find the scrolls to learn healing and turn undead, then use them frequently to become more efficient, since skills get better with practice.

Character leveling is based around improving skills through use. As skills progress, so does the overall character level. This means players can level up lockpicking, alchemy, sneaking, a handful of different spell types, and so on, and it all goes toward the main character’s level. Upon leveling up, players can increase their health, mana pool, or stamina. Characters also gain access to a perk for each level up. Skills have to be at a certain level in order to access newer perks, so saving these perk points for the desired enhancement is often a prudent choice.

Often games will attempt to streamline things and end up dumbing down the product in the process, but Skyrim benefits from these changes without making any major sacrifices to the core experience. In Oblivion, many progression options were tied into an early class selection and an awkward leveling system, but Skyrim offers a much more fluid and streamlined process. Players can also find stone monuments throughout the world that grant unique enhancements to a set of skills or abilities. Players no longer need to sleep in order to level up, so that fixes another awkward mechanic from Oblivion. A new feature here is the addition of shouts. These special skills are found throughout the game, and will grant players a useful ability such as a dash, fire breath, or a force push. These shouts must be unlocked and only one can be used at a time before needing to recharge, so while they add a new dynamic to combat, they don’t overpower.

Combat and character progression are just one side of the game. Traveling the world and completing quests is the other, and this is the heart and soul of Skyrim. The world is a snow-covered land full of mountains, rivers, waterfalls, tiny villages, deep caves, and huge cities. While there might not be a lot of diversity in the look of outdoor areas, the environments and views are still breathtaking. Players could spend hours just wandering around the vast terrain and still not find everything, as there are lot of hidden locations and treasures. Simply veering off the beaten path to explore some mysterious ruins might open up a whole new quest line. Thankfully, it is easy to get around in Skyrim, as fast-travel is still available along with horses to ride and carriages that move between all of the major cities in the game. 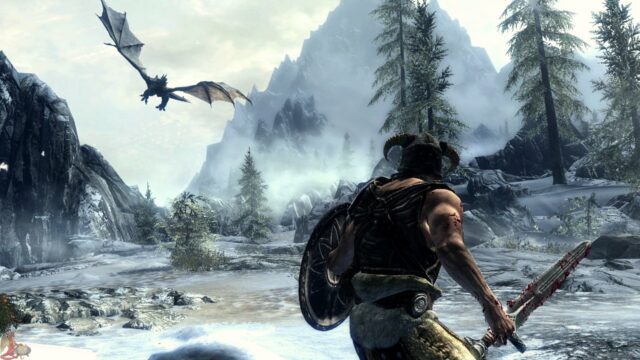 The main quest of Skyrim is woven so seamlessly into the overall world that it is almost indistinguishable. Players take on the role of a Dragonborn, one prophesied to return to the land at a time when dragons are returning in order to stand against them. While there are not a lot of gut-wrenching, role-playing decisions to be made, the experience of simply visiting all the locations and meeting those who live within it is more than adequate. Regardless of the choices that are made, NPCs rarely respond to the main character any differently, so unless players go on a killing spree, no one takes notice. Quests are all very easy to follow via the map, though thankfully the game doesn’t handhold too much. Much like in other Bethesda RPGs, these quests give players a push that will keep them wanting to do just one more to see what happens next. Once a sidequest line has been completed, there are still more quests that become available, so it seems like it’s a continuous experience, not just a story branch. Skyrim is all about the journey, so anyone going into it looking to take the critical path will not only miss out on a ton of content that is easily one of the best parts of the game.

There are also tons of smaller side quests available, and players can barely go a few feet without someone needing help. While these little fetch quests might not change the world, there are other little bonuses they grant, such as getting characters to offer to tag along as companions or even offering a hand in marriage. As far as matrimony goes, don’t expect a lot of depth here. The courting process is really shallow, as it simply requires completing a quest for the potential mate and then approaching the person while wearing a special item. From there it is straight to the chapel to get married, though don’t be surprised to see the new spouse out the door and back to whatever they were doing before the ceremony is even complete.

Companions are also rather one-dimensional, though there are plentiful options available. Just don’t expect any real character development from these followers, as they are mostly fodder with only a few lines of dialogue. Having help in combat is always a boon, so it is hard to complain about the lack of depth these characters offer, but it is a far cry from the companions of a game like Fallout: New Vegas. That said, there are so many people willing to join up that the variety is staggering, even if there is little difference between these helpers. 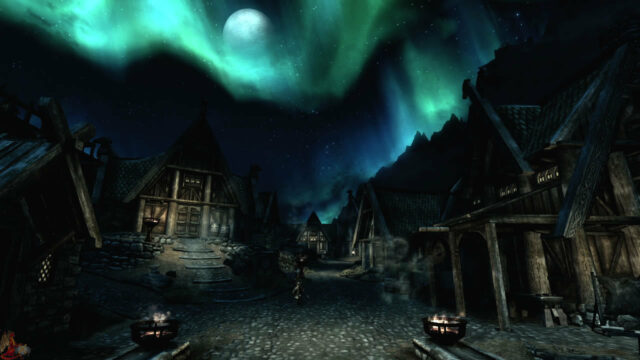 The atmosphere and setting of Skyrim is fantastic. The graphical process at work here is impressive, but the new game engine’s impact mostly shows in the world at large, as its characters are still fairly expressionless. That aside, the graphical detail for even those dead-faced characters looks considerably better than any prior Bethesda offering and is all the better for it. Despite taking place in a rugged snowy area, locations are highly detailed and do an amazing job of really shaping the world into what one would expect from an area like this. The game’s soundtrack further adds to this atmosphere, as music fades in and out to complement the presence or absence of dramatic moments. The visuals, music, and high-quality voice acting all add up to a very immersive experience.

It is clear that Bethesda took notes from Oblivion and Fallout 3 as many of the problems from those titles have been addressed here. That’s not to say that the game is bug-free, because it did have a few issues. It froze up a few times, slowed to a churn during one massive battle, and caused a few odd, yet harmless, graphical glitches even with the game installed to the hard drive. Despite those issues, Skyrim is very stable in comparison to the past few games, likely due in part to the new engine. There is already a patch available to address issues within the game, but it is impossible to say if these specific problems will be fixed.

Skyrim is one of the finest embodiments of an open world RPG, as there is never a dearth of places to go or quests to complete. What Skyrim lacks in tough role-playing choices, it more than compensates for with interesting things to do. While the main quest can be wrapped up in less than thirty hours, expect to spend way more time than that in attempting to complete everything. This is one of the few games where the side quests are compelling enough that you’ll actually want to do them. Skyrim has content in spades, so if you enjoy exploring and helping out the less fortunate, or sometimes those just looking for you to do their bidding, then this is the game for you.