But Dreams Live On

One of the largest problems with reviewing ports and other updates of classic RPGs is the nostalgia factor. It’s very easy to slip into praising a game based upon the feelings that it evoked when the reviewer was twelve years old. This tactic is frequently disparaged, despite having some merit. After all, collectors need to know if the newest Dragon Quest remake goes too far in “fixing” the flaws of its original release. Stable battery backups are fine, but a silly Russian accent in the wrong place can completely change the tone of the game.

Thankfully, Tactics Ogre: Let Us Cling Together has avoided the central demon of reviewing remakes: how fair is it to lavish praise upon a game that was first released fifteen years ago? Don’t gamers deserve fresh, exciting content that pushes the boundaries of what has been previously released? Square Enix has done gamers a favor by rendering the question moot this time around. So much of the game has been upgraded from Tactics Ogre on the PSX that the new release stands as one of the gems of the tactical RPG genre. In short, this version of Tactics Ogre is the time-displaced sequel that Final Fantasy Tactics deserved.

The story is a character-driven conflict about the political fate of a small island chain. Much like a good Suikoden game, saving the world feels like an antiquated dream when contrasted against the suffering of disenfranchised ethnic groups and class warfare. Characters make frequent allusions to the insignificance of the Islands in the grand scheme of the world, helping to contextualize one of Tactics Ogre‘s central themes: war is a constant in human experience. From the largest nations down to the individual, conflict demands difficult choices. Some of these choices can be avoided, but even negating the decision can bear consequences.

Unlike many games with branching morality paths, Tactics Ogre‘s are not easy ones. While Lawful and Chaotic paths do exist, they’re rarely differentiated by facile black-and-white options. Each of the major divergence points leads to arguable benefits and downsides: in other words, don’t expect to be deciding whether to kill a box of puppies or send them to good homes. Straight-up villains exist, but even they have sympathetic quirks and respectable depth. Sure, they monologue as if the fate of nations depends on it, but the localization is charming enough that this is more of a positive. Most characters speak with a refined air that suits matters of honor and statesmanship.

In addition to the “Big Picture” questions, lesser decisions also bear consequences. Even the most insignificant enemy general is likely to have a back story that invites pathos once he’s gutted for experience points. Completing the game doesn’t require hearing about each speed bump’s family history or scholastic endeavors, but doing so goes a long way in personalizing the often abstract hustle and flow of war. Sidequests, including several new ones, serve a similar purpose. 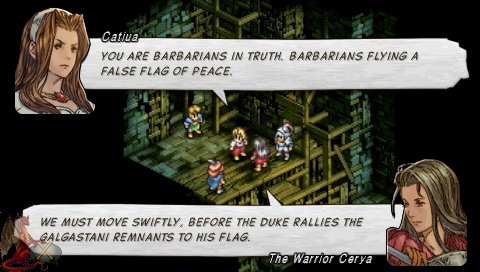 The goal here is to keep yourself alive.

Such reminders of the human impact of war provide the story with additional heft, as few battles on the Valerian Islands feature more than thirty participants. Many of the missions suggest that these skirmishes aren’t representative of a larger fight: they really do only feature a handful of elite warriors. However, when entire cities burn and populations of 5,000 civilians are casually referenced, it can be difficult to place the blame in the hands of a combat party of twelve. Taking the side characters’ backstories into account makes it easier to imagine the Islands as an actual place rather than a series of encounters. Story happens behind the scenes, away from the eyes of the supposedly omniscient player. The rarely seen rank-and-file of the protagonist’s army exists in this interim space along with the text-only accounts of generals too unimportant for a full cutscene.

Appropriately enough, the high drama of the battlefield is backed by a driving orchestration. The sound team has expertly expanded on Hitoshi Sakimoto and Masaharu Iwata’s original work. Beyond the complete re-orchestration, they’ve added new tracks into the body of regal marches and ominous backroom slinks. Delicate harps and wistful woodwinds hide among the military surge, keeping balance and adding subtlety. Most maps have their own battle themes, which keeps the music fresh and the volume firmly unmuted.

Basic gameplay is similar to the core tactical RPG experience, but with enough subtle mechanical tweaks to eliminate most longtime pet peeves with the genre. For example, characters don’t earn individual experience in battle. Experience is instead spread evenly between all survivors. Not only does this mechanic support the notion of a well-oiled team that’s able to work together, it also makes training new recruits into a minor issue. By cutting out hours of grinding via punching a high-leveled ally in the back of the head, Square Enix demonstrates an uncommon respect for the time of its players.

Bringing new characters into the party receives a further boost through the class-leveling system. Instead of individual characters gaining experience, it’s distributed to their classes. For example, if the main character is a knight, all knights in the party receive experience when he does. Change the protagonist to a warlock, and he becomes the same level as every other warlock. At first blush, this scheme turns all characters into boggle-eyed clones of another. Fortunately, skill points and variable base statistics maintain each unit’s individuality. After battle each character receives skill points which are spent on skills. Each of the impressive number of classes has several unique skills, and each character has a maximum of ten skill slots. There’s never enough room for a character to be equipped with every useful skill. As a result, even battles in the endgame — and level-adjusted postgame — are filled with difficult tactical decisions and thoughtful customization.

The postgame deserves additional explanation because of its novel take on the New Game+ concept. The game continues after the end credits roll, allowing the final party to charge headlong into the future. More importantly, they can leap backwards into the past. Did the wrong person die? Was the protagonist callous when he should have been sentimental? All it takes to correct this oversight is accessing one of the several waypoints scattered throughout the game’s visual timeline. Every time a new story path plays out, it’s added on. The end result is a visual flowchart of every possibility within the story, which can be visited time and again by a continually challenged party.

One of Tactics Ogre‘s most daring new mechanics is the Chariot system. This option allows the player to take back up to fifty of the previous combat turns. Repeating the same tactic until the numbers fall in one’s favor doesn’t work, but it’s excellent for scoping out an enemy’s capabilities or recovering from a dumb misstep. Depending on one’s gaming goals, this can be either a welcome timesaver or a wretched crutch that poisons the challenge of an otherwise difficult game. Challenge-driven gamers will delight to know that the system keeps track of how many battles are won without using the Chariot. Everyone else can celebrate knowing that they’ll never again lose a battle because they shot a critical arrow into the mountainside rather than the intended target. 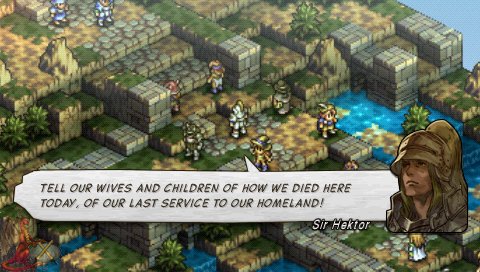 Who wants to live forever?

Character death is likewise less serious than it was in the past. Upon losing all of his or her HP, friendly characters have three full turns in which to be revived. Failure results in the loss of one life and exclusion from the battle’s division of experience and skill points. After three wasted lives, a character is permanently dead. Even then, all is not lost. For a price, their skills can be transferred to living allies. Like many of the small tweaks, death is now an inconvenience rather than something that will completely derail a struggling party.

The few areas where Tactics Ogre falls short tend to be where it doesn’t distance itself enough from its roots. Although every character’s updated portrait is crisp and fits with his or her personality, the main sprites show their squatty, cartoonish age. This disparity leads to tonal whiplash when morally complicated wartime decisions are made by roly-poly soldiers in dumpy, purple pants. The stated objectives for each battle are similarly mired in the past. Objectives are never more complex than clearing a screen of all enemies or defeating the opposing side’s leader. A handful of battles include supplemental conditions, but these are primarily limited to keeping NPC allies alive — a vexing task, when all their AI wants to do is charge into the farthest away clump of unfriendlies. On the bright side, these side goals carry consequences: failure to protect a new friend can alter the story in critical ways.

Enemy AI isn’t much more inspired than allied NPCs. Enemy parties have a few tricks that a novice tactician can learn, but their primary strength rests in raw numbers. While players can apply these rote tactics to their own forces with the AI function, speed is the primary reason for doing so. The variable settings for healers, front-line combatants, and the like are a nice touch, but the dip in combat effectiveness is rarely worth it.

Unlike the AI, the uninspired item crafting system is more than a missed opportunity: it’s a straightforward shame. Crafting provides equipment that’s substantially better than what the shops provide, but the process is an uninspired menu slog followed by inescapable animations and a high chance of failure. Most of the crafting ingredients are cheap and readily purchasable at the same location where they’re turned into items, further shaming the drawn out procedure.

These criticisms are minor compared to Tactics Ogre: Let Us Cling Together‘s many strengths. The tactical RPGs that have been released since its last appearance have only aided this cleverly constructed machine. Square Enix has improved the battle system where its imitators have failed, while expanding on an already powerful story. A single trek through the Islands isn’t enough to see everything, as lengthy as the trip may be. Fortunately, the postgame is more than suitable for the task. Tactical RPG fans have little reason not to check out further information about this game, unless they’ve already purchased it. Strangers to the genre are also encouraged to check it out as an example of what it does best. For balanced tactical combat, tough moral choices, and sieges consisting of eleven octopods and a guy with a whip, Tactics Ogre has you covered.