Failbetter Games’ Sunless Skies is an obsidian locomotive, beautiful and unforgiving. It isn’t always the most comfortable way to travel, but it’s the classiest ride this side of the New Sequence. Its engine runs on the same eldritch fuel as Sunless Sea, producing a whirling haze of real-time navigation and combat glorified by stories that are alternately horrific, funny, and melancholy. Although Sunless Skies is a sequel to Sunless Sea and the browser-based Fallen London, and familiarity with the setting deepens the experience, it isn’t necessary. All one needs to know to start is the good people of Victorian London have traveled beyond Earth’s farthest horizon and set their sights on the High Wilderness — a numinous domain not entirely unlike outer space. Bold captains pilot locomotives among the heavens on missions of trade, conquest, and discovery. Simply put, RPGamer’s Most Original Game of 2019 is a must-play for fans of story-rich, Gothic maritime simulators and their relations. Anyone left cold by Sea‘s pace or trade system may still enjoy Sunless Skies‘ refinements and bizarre atmosphere. 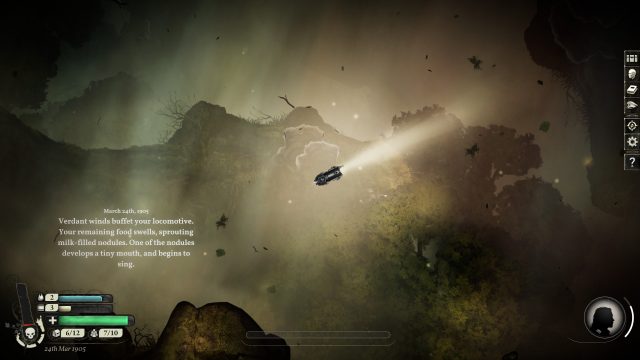 Each zone of the High Wilderness has its own feel. The Reach is fecund and riven by war.

Sky-train captains are customizable characters, initially consisting of a name, silhouette, and starting profession that determines their skills: Hearts for empathy, Irons for violence, Veils for stealth, and Mirrors for insight. As the story progresses, captains uncover background facets like a family scandal or uncommon disease. Depending on how the player responds to these story snippets, the captain gains skill boosts and rare treasure. Especially impactful actions during play, such as befriending Bohemians, running a starshine racket, or nearly dying, unlock additional facets. Although each facet contains a story fragment, they rarely impact outside elements of the game. One potential facet reveals the captain received thirty extra years of life to rebuild London among the stars. Narratively, the player chooses whether they honored the deal or fled the construction to fritter away the extra years; mechanically, they choose whether to boosts their Iron or Veils. While adding a smidge of depth to each run, facets do feel like a missed opportunity to build more stories around the captains’ histories.

Despite this quibble, Sunless Skies is jammed full of squirming, shaking words. Its stories are the howling well that draws captains farther from their home ports and transforms calm evenings into quiet nights and the startling realization that a proper bedtime would have been hours ago. Although the overall tone of the game is grim, Gothic, and darkly comic — favoring Hearts and Mirrors skills and their related equipment — it isn’t limiting: drama, adventure, hope, and the unique human experience all have a place. The richest stories are attached to the train’s officers, who lend their strength to the vessel, and these provide motivation to tear around all corners of the skies in quests quixotic, horrific, heart-breaking and delightful. Sometimes an officer wants to consummate a marriage that Should Not Be, other times a bunch of scrappy rats have to plan a heist. So it goes!

Officer quests and side-stories fill in the spaces between each captain’s nominal goal: their ambition. Each of Sunless Skies’ three main ambitions (plus one hidden) is a full “run” of the game from start to retirement. The core game is the same for all three ambitions, but they lead through locations in a different order and reveal different aspects of the setting. Each ambition contains several stages: for example, hoarding wealth requires building a mansion and establishing prestige with a faction, while locating the mythical Martyr’s Cup requires consulting far-flung experts and stretching one’s mental facilities beyond comfort. Ambitions drive exploration: to reach the end, a captain must travel the more inhospitable, non-Euclidean corners of the High Wilderness. Victory unlocks a special facet for the next character in a captain’s lineage. Lineage also preserves a fraction of a deceased captain’s salvaged possessions for their next of kin. 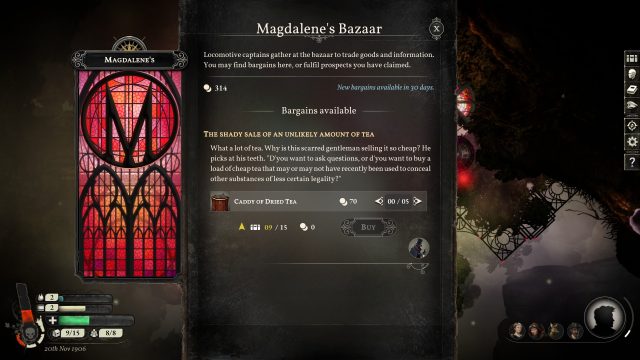 A bargain like this doesn’t come along every day, even if you know the right sorts.

Death is swift and merciless on the default difficulty, although there are several options for more relaxed exploration. Players less enamored with the real-time combat can enable enhanced aiming. Permanent death is likewise optional. Even with the most challenging options, a deceased captain passes on a fraction of their riches, including their map of the skies (which is otherwise randomized), to their heir. The only disadvantage to the lineage system is some stories can only be completed once per lineage. There is little rhyme or reason to which stories can only be completed once per reality.

The real-time combat is often challenging, but rarely nuanced enough to fully satisfy an indefatigable appetite for violence or the tactics thereof. Success turns on managing momentum and weapon heat while dodging enemy attacks. Wise captains soon learn which enemies their armor can handle and kite accordingly. Fights are short and decisive, making avoidance a key weapon in any sky-farer’s arsenal. Most enemies have a narrow sweet spot where knowledge and tactics can compensate for poor equipment, rewarding knowledge and experimentation. As a result, many of the sky’s horrors are risky confrontations right until the point where they become trivial. Then the knives come out and the looting can begin.

Wealth, measured in sovereigns, secrets, and trade goods, drives many of the narrative choices. Providing supplies to settlers and scientists allow their great works to proceed. Regular markets buy and sell goods for the same price. However, repeatable stories provide bargain goods and profitable opportunities. As such, trading often feels like seizing a golden opportunity instead of endlessly following set routes. Rank-and-file merchants need not apply. This is seat-of-the-pants commerce that responds to local conditions, buying tea when it’s cheap and dumping it when the moment is right. Helpfully, goods can be banked and freely transferred between major ports. Managing cargo is still crucial, as major ports are few and far between. It’s big in space. 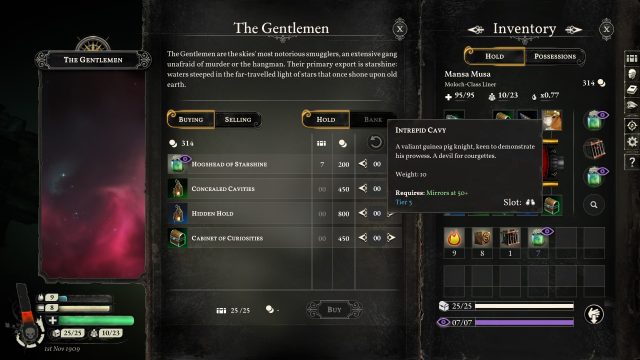 Working with smugglers can be dodgy. Better bring a cavy to be safe.

The skies’ treasures are connected by long stretches of mostly empty space. Even with the post-release engine update, travel across the High Wilderness is leisurely. Space is large, ports are distant, and trains are ponderous. Early on, the scarcity of supplies makes logistics a matter of life-or-death. Overloading on fuel and supplies is expensive and leaves less space in the hold for trade goods, while under-packing is the quickest route to an early grave. Figuring out the sweet spot is a marvelous puzzle that keeps malaise at the enormity of the skies at bay. Paradoxically, boredom and panic live side-by-side in the far reaches. The unexpected appearance of a Scrive Spinster, Undeparted, or Eater of the Dead can quickly sink a milk run, to say nothing of the train.

Although not always pleasant, Sunless Skies’ whiplash between tension and routine is key to its singular atmosphere. Each captain’s journey begins in an unwelcome skyscape dotted with islands of civilization. It’s dark in space, a darkness that can numb the senses or reveal true loneliness. Each of the High Wilderness’s four regions expresses this isolation in a unique way, ranging from the decrepit mechanism of Albion to the bureaucratic disinterest of the Blue Kingdom.

The journeys are scored with slow, haunting dirges and shanties punctuated by clanks, discordant bonging bells, and the hunting cries of implacable predators. Silence stretches between the music, giving dread space to settle. Outside the game, the soundtrack is excellent for studying or relaxation. Real skyfarers know the slow chugga-chugga-chugga of travel and the frantic careering past bees and space-bats, cursing their hold full of honey and bat eggs. 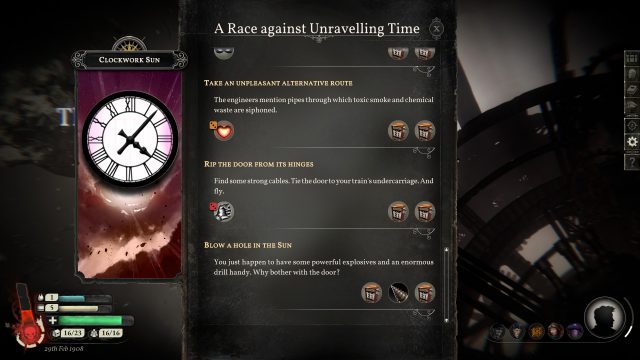 There are many inadvisable actions in Sunless Skies. Most of them are worth it.

Sunless Skies is an excellent game that rewards commitment to its steady pace and steep learning curve. A web of plots and places suggest the infinity of the heavens, but even infinity must end; in this case, it stretches across a million words or so and easily forty hours. The story doesn’t explore every nuance introduced, but that’s a running problem when writers seek to explain the ways of the heavens to mortals. Like many powerful, unique titles, Sunless Skies leaves the player with the desire for more, not because it’s lacking but because it appeals to the mania to solve every mystery, plumb every depth.

Disclosure: This review is based on a copy of the game received as a Kickstarter backer.