Signs of the Sojourner Review

Connections, both personal and societal, are central to Echodog Games’ Signs of the Sojourner. Trade caravans keep the communities connected, forming networks of interdependence. The world is in bad shape, but small communities chug along. When the unnamed protagonist’s hometown is at risk of being cut off from the caravan route, they head out into the world to continue their mother’s business. Running a general store in Barstow requires building connections with merchants and other potential allies. Stock is scarce in the post-crash society, so establishing trust goes a long way in keeping a town profitable. Signs of the Sojourner places great importance on these bonds, weaving a narrative around the protagonist and their neighbors that results in more emotional punch than in other games several times its length.

Establishing trust is a matter of playing the right cards, as all the important conversations take place in a card game. Matching a symbol with the previously played card advances the conversation, while differing symbols cause it to stall. Each character’s deck represents their personality and values; since Barstow is a community of empathic, community-oriented folks, the protagonist begins with a deck of orange circles and green triangles. Other proponents of the community-focused green triangle include Marques, a scheming patron of the arts, and Anka, a growing town coming to grips with its insular past. After each conversation, the protagonist replaces a card in their deck with one from their partner. Adapting to the outside world can mean learning more nuanced ways of communicating, fighting to stay the same, or switching rhetoric entirely to include artistic, individualistic diamonds or straight-shooting squares. Travel tends to change people, and the home they leave is rarely the home they return to. This dynamic is especially effective in the protagonist’s conversation with Elias, their childhood friend, who keeps the store running while they travel. Keeping — or losing — his friendship is an especially heartfelt reminder of what it can mean to explore outside of your comfort zone. 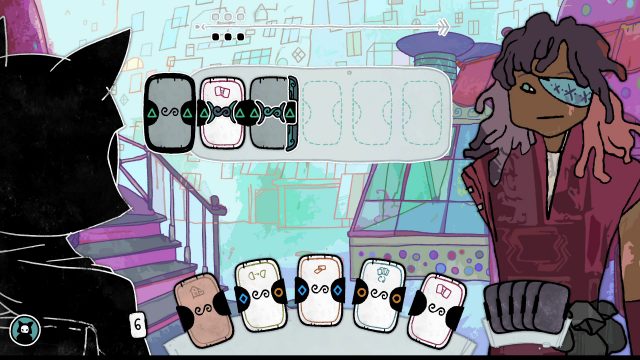 The player can match their Accommodate card to the right-most triangle symbol. None of their other cards match the triangle, so they would destroy the turquoise Accord.

The relationships in Signs of the Sojourner are thoughtful and bittersweet. Often they’re between two people who want to reach a common goal but just can’t understand one another. Even noble goals may fall apart based on the speakers’ different expectations and modes of expressing themselves. Since cards represent rhetorical strategies and ways of being rather than specific words, the bulk of each conversation is an interplay of abstractions. Only after a series of positive matches — or a promising run that devolves into disharmony — does the speaker put dialogue to their feelings. A handful of early conversations key the resulting dialogue to the symbols on the cards played; however, for the bulk of the game, each chunk of conversation has one positive response and one negative response. As a result, there’s occasionally a judder between the protagonist’s intent and the response. This balance between abstracted conversation and specific words generally works though, and gives space for the player to fill in specifics while still establishing nuanced characters.

Crafting a deck, and therefore a persona, that can adapt to the rigors of the road is challenging but generally fair. Since the deck is limited to ten functional cards, trying to please everyone is a good way to draw hands that disappoint everyone. However, cagey players can curate their decks with multi-purpose cards, upgrades, and plan their route based on anticipated challenges to make the most of their strengths. Alternately, focusing on a subset of abilities provides a more straightforward path. Players with a more conservative style may feel penalized for traveling outside of their comfort zone, as switching specialties often requires failing several conversations. Within the narrative, it makes sense that reinventing oneself isn’t easy, but mechanically it’s a bitter pill to swallow. Deck-building is complicated by useless fatigue cards, which accumulate on longer journeys. Stay away from home base for too long and it’s impossible to have a meaningful conversation with anyone. A quick chat with a friendly dog can help even the weariest traveler, but even puppy kisses are no replacement for a familiar bed. 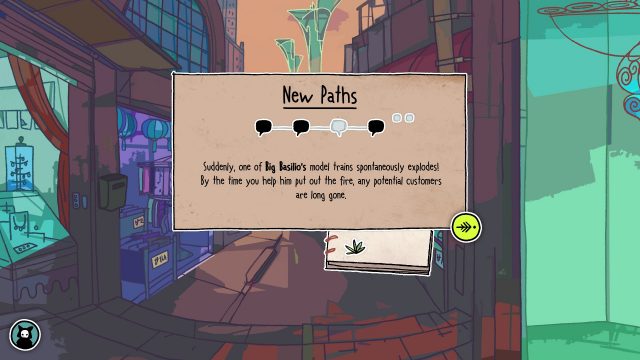 Even conversations that end in flames can impart information. Big Basilio mentioned a desert oasis before he was derailed…

Disappointing the characters is an emotional experience, since it’s so easy to care about them. It’s a testament to the setting that characters feel fleshed out in such a brief playthrough. The setting helps inform its inhabitants, playing off the excellent character designs with expressive architecture and bold palettes. The harsh landscape evokes scarcity and ruin, but the people that travel and live in it are generally hopeful and community-minded. Local problems can be solved, which leads to wider change. Spirited music marked by flutes, guitars, and percussion highlights the mood of each stop, generally in the bustling or contemplative registers. As harsh as life in drowning Old Marae and Persarrey can be, their themes are prime chill tunes. Overall, the setting presents plenty of mysteries to uncover and relationships to build.

The terrible tyranny of time insures there’s no way to visit everywhere and please everyone on a single playthrough. The initial run takes around 3 hours, while subsequent runs will be more streamlined. While there aren’t any new game plus features, learning the game’s strategies and systems tends to lead to more successful relationships, access to farther corners of the map, and more esoteric endings. There are 5-7 major endings, which are influenced by smaller actions taken along the way. As a result, there’s often a fear of missing out or an underlying drive to perform optimally in order to perfect the playtime-to-awesomeness ratio. However, this ratio is skewed by several quality-of-life issues, which impede easy travel.

Like a boot with a pebble in it, several elements of the interface grate over time. There’s only one save slot and no way to bypass familiar scenes, which leads to repetition across multiple runs. Exploration is likewise hindered by the strict limit on save-scumming. Although resetting a conversation gives the player a chance to fix foolish mistakes, the deck order stays the same. In other words, bad luck in the initial draw can sink a key encounter. There’s probably a lesson in there about acceptance and adaptation, but it also means ruining plans and locking off paths until subsequent runs. On the dissonant side, large trade caravans can travel to a location, but the protagonist is unable to follow because they haven’t unlocked the route as part of a conversation. Mechanically it makes sense, but narrative immersion takes a hit. Likewise, there’s no way to hang back in a location for a few days, which can make planning for festivals and other temporary events a challenge. 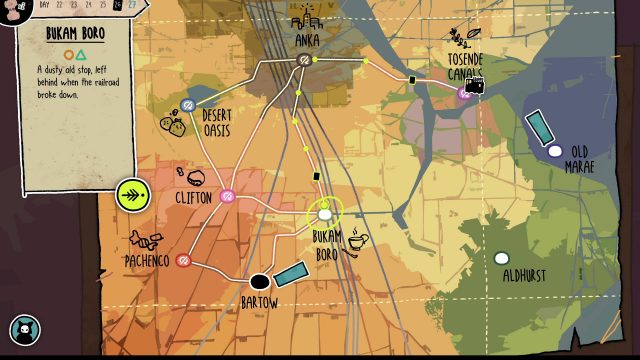 The region map gains locations, routes, and notes as the player learns their way around.

Despite these quibbles, it’s a lot of fun to craft a deck to meet the challenges and stories of the road. Meeting the characters along the caravan’s route and learning their stories is a joy that drives mechanical experimentation. It’s refreshing to create harmony and boost meaning-laden signal over noise. Travel and community both have their place, and deciding how much to value each one is part of the journey. Helping people reach their goals while aiding a greater whole is wholesome and affirming. Even if it means Pale Dale swipes some stuff along the way.

One of the great debates in game design centers on length. One line of reasoning suggests a game should only be as long as necessary to say its piece: everything else is strain on the designers and empty hours for the players. Short, thoughtful games — including Signs of the Sojourner — are necessary, so it’s easy to look at a call for more with suspicion. Do the mechanics and dev-hours support the variety that a call for more locations, more characters, more stories would entail? Where does the call for more feed into the call for excessive commodification of personal projects? Despite these concerns, more Signs of the Sojourner would glorify an already compelling game. By the time its rhythms fall into place, the game is already over. Teasing out its secrets enhances its replayability, but it’s exciting to think of a future with more opportunities to jam out in Aldhurst and be a catalyst for social change. 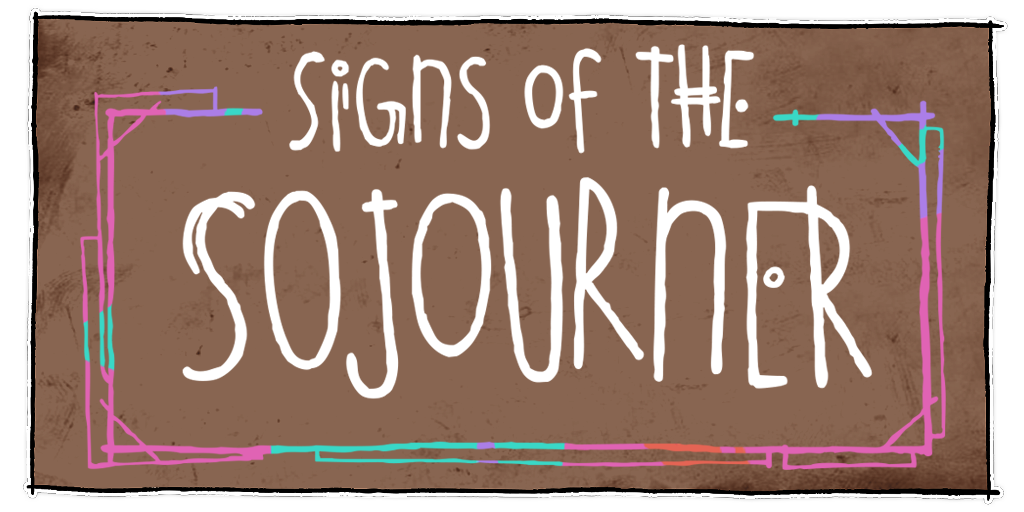