The Cherry Blossoms are in Season Again

Games that marry visual novel and dating sim elements with RPG gameplay have become prevalent in recent years. Whether it’s the social links in Persona games or romancing your favorite alien in Mass Effect, the interaction and relationships between the cast have become a large draw for fans. However, the forerunner of this melding of genres has missed the blossoming of the melded genre that it helped pioneer. After a decade in the wilderness, Sakura Wars has returned to bring new heroines to defend Tokyo from demons while maintaining their cover by putting on shows.

Sakura Wars opens a little more than ten years after the events of the last entry, Sakura Wars: So Long, My Love. In the time between the games, a large battle with the demons caused all the Combat Revues around the world to band together to save Tokyo and seal away the Archdemon. While the Revues were successful in defeating the Archdemon, they were wiped out in the process. Thus, this newest entry in the Sakura Wars series serves as a soft reboot, making it a friendly onboarding point for players unfamiliar with the series; since so little of the series has been featured in English, this is a welcome choice, though there are still plenty of links to satisfy returning fans.

With the loss of the previous heroines, Tokyo’s Imperial Combat Revue has fallen on hard times. Sole survivor of the original cast, Sumire Kanzaki, is attempting to revive the run-down theatre despite minimal funding and a disinterested public. The new cast hasn’t learned to work together and has become a laughing stock among the locals. Perhaps the greatest indignity is that Tokyo is currently protected from demon attacks by the Shanghai Combat Revue. Into this mess steps Seijuro Kamiayama, a naval officer and new captain of the Flower Division. He has to turn this disparate group of women into a force on the stage as well as the battlefield. With the World Combat Revue Games approaching, the Flower Division has one last chance to reverse its fortunes and recapture its lost glory. 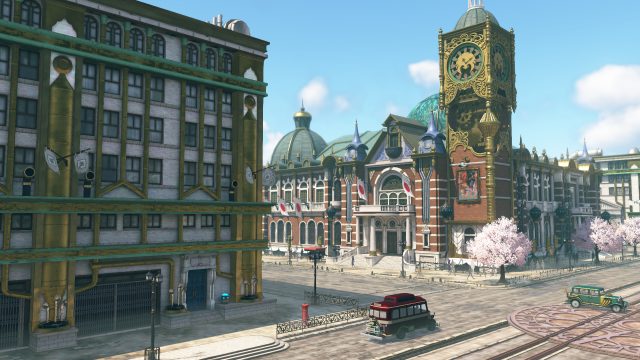 Sakura Wars has an incredible sense of style.

The overarching story of battling demon outbreaks while also competing with other Combat Revues from around the world is certainly entertaining. The competing revues make good foils for the Flower Division, and while “plucky upstarts going up against more experienced teams” is a well-worn trope, it is executed with aplomb in Sakura Wars. The game is filled with delightfully bizarre moments, such as entire city blocks transforming to allow airships to take off. As the story progresses, there are some tie-ins to earlier series entries that fans will enjoy, ultimately wrapping up with a satisfyingly bittersweet ending.

However, the main draw and series’ primary standout element is its handling of the interpersonal relationships between the characters. Players control Seijuro’s interactions with the cast through the series staple Live & Interactive Picture System (better known as L.I.P.S.). L.I.P.S. is more involved and engaging than the typical choice between a couple of different dialog options. Every decision that presents itself is timed and there is always the option of making no choice at all, which in certain situations might even be the “best” option. L.I.P.S. also involves instances where players choose how forcefully to say a line using the analog stick, from a meek whisper to a booming bellow. Every decision that a player makes for Seijuro affects how the cast and crew of the Flower Division see him, and the status of these relationships affects the characters’ battle stats, as well as dictating the ending. The decisions are more subtle than usually found in video games, and trying to choose decisions to please everyone will often please no one. It is a system that keeps players on their toes and adds tension as the decision timer ticks down. Any RPGamers that are signing up for Sakura Wars are in for lots of dialog, but at least L.I.P.S. keeps it engaging. 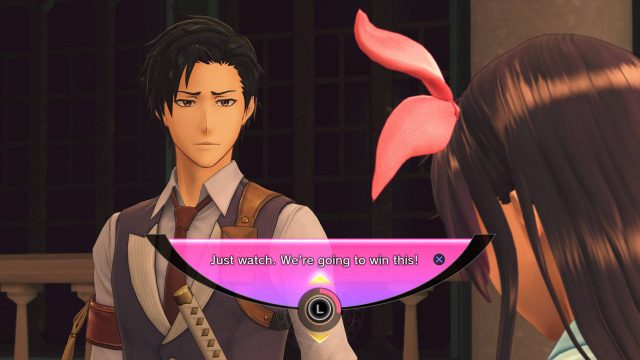 Those relationships are formed with quite the eclectic cast of characters. Sakura Amamiya, the main heroine, wants to join the Flower Division to live up to the memory of her childhood hero, Sakura Shinguji, who was the star of the first two games. Despite this overused trope, Sakura, a childhood friend of Seijuro, is sweet, earnest, and endearing and she has the most character growth of any of the cast. But there is plenty of variety on the stage of the Imperial Revue: Hatsuho Shinonome, the hot-headed shrine maiden; Azami Mochizuki, the teenage ninja with a weakness for sweets; Anastasia Palma, the cool and aloof famous actress from Europe; or Claris Snowflake, a member of Luxembourg nobility and the division’s resident bookworm. The cast is an energetic and entertaining group to spend thirty hours or so with.

This new iteration in the Sakura Wars series has decided to eschew the previous strategy battles for a new action battle system. It has a standard setup with light and heavy attacks chaining together into combos, as well as a special attack meter that builds up as enemies are defeated. The special attacks almost guarantee an easy win against bosses, as long as they are saved for those situations. In most battles, Seijuro will be joined by one of the other members of the Flower Division and each of the characters has a unique feel with special moves, speeds, and strengths. Dodging is also highlighted, as last-second avoidance of attacks allows Seijuro a few seconds where time slows and he can wail on enemies.

It’s a serviceable combat platform to build a game upon, but it isn’t without issues. The characters are piloting mechs so there is more weight to the movements than in a typical action game. There is a bit of appropriate sluggishness to the movements of the mechs, but this is balanced by an ability to boost quickly around the stages. However, quick movement causes some camera issues as players will struggle to manipulate it while zooming across the screen. This is somewhat balanced by a lock-on camera that helps with the one-on-one encounters, but it still falls a bit short in the more hectic battles. Some of the flying enemies can also be frustrating to take out if players haven’t brought along a party member with ranged attacks. Ultimately, the game is easy enough that these negatives don’t turn into prolonged frustrations, but fans of action combat will find Sakura Wars a bit lacking. 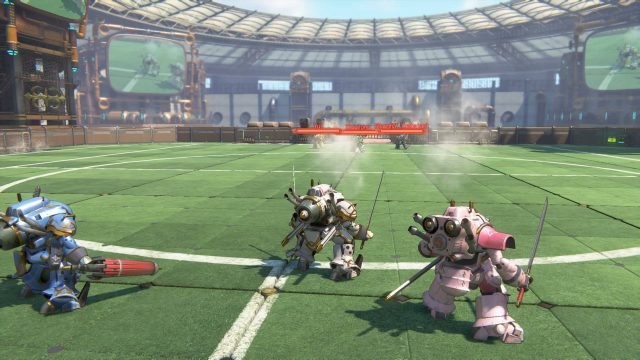 The swap to action does mean that the pacing is unbalanced. Sakura Wars games have always been story-heavy, but it does feel a bit strange to have several hours of story content punctuated by just fifteen minutes of action. There are a few short battles thrown in to protect the theatre and all of the story missions can be replayed to increase the relationship level with a selected partner, but while the battles are fine a first time through, they aren’t engaging enough to warrant repeated plays.

The graphics can be split into two different parts. The story segments look fantastic and the in-game engine segments almost perfectly match the animated cutscenes. Sakura Wars’ vision of an alternate history steampunk Tokyo is colorful and vibrant even if it is somewhat limited in scope. The character designs look great and are incredibly expressive. All the adventure segments set in Tokyo just come alive and pop off the screen. However, combat sections don’t live up to this same standard. The game’s conceit is that demons create an alternate dimension in parts of Tokyo for the battle sections to occur in. So instead of a beautiful rendition of Tokyo, it delivers bland fire, ice, and industrial-themed dungeons. Considering the split between combat and story, it doesn’t dampen the artistic highs of the latter too much, but it does make the weaker part of the game that much more lacking.

It probably comes as no surprise that a series that incorporates musical theatre into its storytelling would have an amazing soundtrack and Sakura Wars certainly delivers on that front. A new rendition of the ever-catchy main theme “Geki! Teikoku Kagekidan (Shinshou)” is the highlight that will challenge any player not to hum right along with it. The rest of Kohei Tanaka’s soundtrack is an excellent mix of period Japanese and western-inspired tracks. The voice acting is outstanding, though it is limited to being Japanese-only and that does occasionally cause some issues with the dialogue during action scenes. Subtitles aren’t easy to read when battling dozens of demons. 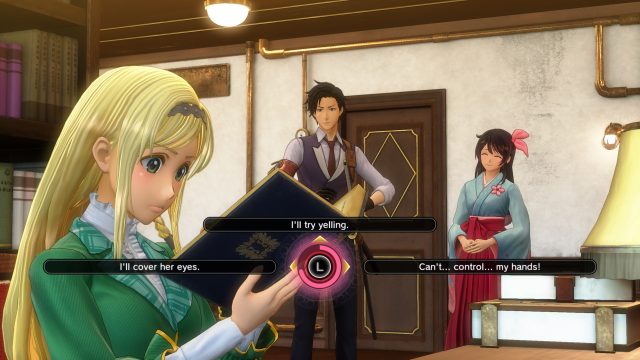 There are always some interesting choices to make.

Technology has advanced in the Taisho-era world of this latest iteration of Sakura Wars and now Seijuro has a steam-powered cell phone to act as the game’s map and menu screen. Of course, it wouldn’t be a cell phone without a game to play and this role is filled by Koi-Koi Wars. This minigame involves Hanafuda cards being matched into sets. Even with the cultural barrier, it’s fairly easy to pick up and becomes quite addictive each time a new opponent is introduced.

I’ve had a soft place in my heart for Sakura Wars since I was first introduced to the series a decade ago. I personally lament the change to an action game, especially since it seems to make it feel a bit more dialogue-heavy without the lengthy strategy sections to balance out the gameplay. However, Sakura Wars has always been about the characters, interacting via L.I.P.S., and experiencing some insane, over-the-top anime antics. In that respect, the new Sakura Wars recaptures the spirit of the earlier entries and is a perfect bit of RPG comfort food to brighten your soul.