Rune Factory is back from the ashes of its original developer’s bankruptcy that resigned many to the likelihood of not seeing another entry. However, nine years after Rune Factory 4, Marvelous revived the series. Remarkably faithful to old titles, even down to a few faults, but with excellent quality-of-life improvements and a move to full 3D, Rune Factory 5 captures the essence of old titles perfectly.

Previous Rune Factory titles have never deviated far from their trope-filled, amnesiac hero-based stories, and true to the past, neither does Rune Factory 5. Players begin the game dropped into a combat scenario where they must defend, Hina, a resident of the town of Rigbarth, from the attacks of dangerous beasts. Once the foes are dispatched, the hero passes out and awakens to find quite a few townsfolk fussing over them. As the hero doesn’t have any memory of who they are, players are offered a place to stay in exchange for joining SEED, an organization dedicated to helping people. Before too long, players are thrust into the enjoyable gameplay loop that the series is known for. 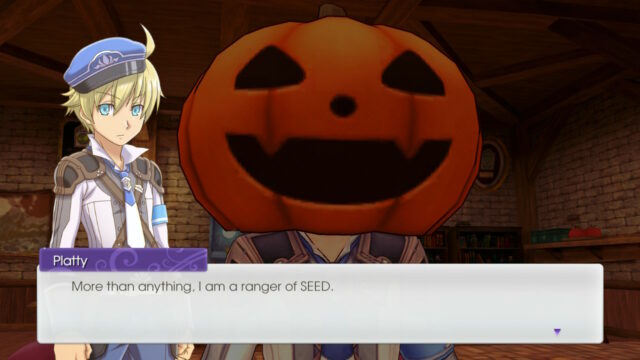 The pumpkin helmet boasts both high defense and comedic value.

Between forays outside of Rigbarth to defeat dangerous monsters and gather crafting materials, players spend their days farming, as well as befriending and fulfilling requests for the locals. All of the systems are beautifully complimentary of each other and encourage players to take part in everything the game has to offer. Fulfilling requests for Rigbarth residents not only opens more options at stores and increases the types of seeds to grow on the farm, but raises the friendship level of the NPCs. Befriending others not only allows them to eventually join the hero in battle, but also lets them participate in new joint cooking and smithing modes on top of opening up various town events. Farming provides a fresh supply of crops to sell, cook in recipes, or give as gifts. It’s a deep, well-developed system that involves soil health, crop levels, fertilizer, and watering daily.

Keeping a balance of all the gameplay aspects is an important aspect of Rune Factory 5. The game can be played completely ignoring some portions if one is skilled enough or drops the adjustable difficulty down, but the core gameplay necessitates spreading one’s time around exploring, battling, conversing with NPCs, farming, and crafting. Over the course of more than sixty hours, requests provide rewards equal in importance to gaining crafting and farming ability levels. Befriending Rigbarth residents allows up to three of them to join the party, making exploring and battling bosses far less dangerous. They also make the extensive variety of weapons, armor, and other equipment that can be created at players’ purchased forge and crafting table far more useful. Leveling and gearing up a few favorite townsfolk can be as fulfilling as doing the same for the player hero.

Rune Factory 5’s action combat is never as deep as the farming or crafting systems, but it’s plenty for a game that focuses more on farming and friendship. The battles rarely evolve much beyond hitting enemies and dodging attacks, but there are plenty of ways for players to prepare for it. Players have a wide variety of weapon types, with each playing differently. There is the ability to recruit monsters not only to provide help at the farm, but to act as party members similarly to Rigbarth residents. These monsters all have their own ranged or melee attacks and can even be ridden into battle. Both monsters and residents level up with combat experience, so making sure to always have a few party members while out exploring is a great idea unless one is actively trying a more challenging solo run. 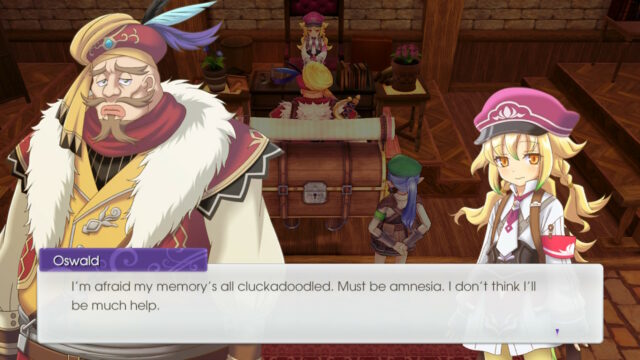 The hero isn’t the only one with amnesia in Rigbarth.

If battling local monsters for their crafting item drops isn’t enough impetus for players, there’s always the main storyline running in the background. It’s a decent story that has some small surprising twists and turns; however, it exists more as plot device to add new Rigbarth residents or open new areas to explore rather than trying to provide a strong stand-alone narrative. There are thankfully few story points that lock out any gameplay elements or can’t wait until players are ready to deal with them when they see fit. Major festivals occur almost weekly, but these can be interrupted by major calamities that keep the more entertaining festival portions locked away until dealt with.

Graphically, the move to full 3D seems to be a successful one for the Rune Factory franchise. While the Wii spin-offs dabbled with 3D, the core numbered titles remaining sprite based to better suit the handheld platforms. Rune Factory 5’s updated look is vibrant, with brightly lit and colorfully designed areas, characters, and monsters. The graphics are not going to blow away players with their fine details or realistic designs, but they fit the welcoming aesthetic the series is known for very nicely. Similarly, the soundtrack is quite good and fits the graphical feel of the game in all areas. While nothing might catch on as an earworm, no tracks seemed out of place or of noticeably poor quality. The voice acting, typically only present in cutscenes, is nicely done and a welcome inclusion. 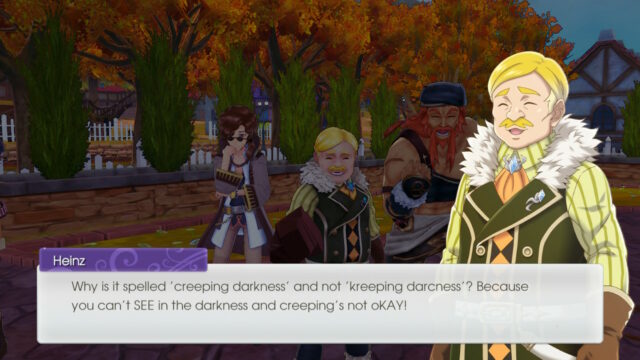 The NPCs have great designs, but perhaps questionable senses of humor.

Rune Factory 5 is not without its foibles. One thing that’s been a Rune Factory staple for a while has been the random town events that constitute many of its side stories. Rune Factory 5 improves these by putting quest markers on the town map instead of players having to find them by encountering specific NPCs in specific places. While the system worked great for quite a while, during the playthrough for this review, eventually they ground to a halt. After starting a story about the youth of the town all loving a lazy resident, no quest marker ever appeared and nothing further triggered from encountering any the residents involved. There could be some bad luck involved, or it’s a bug set to be patched, but it’s an unfortunate harkening back to the randomness of town quests in Rune Factory 4 on the 3DS and how they could keep players locked out from post-game story content. While this didn’t lock out any main story content in Rune Factory 5, it did put a halt on the side stories.

Another negative aspect that’s been widely reported on since the game released in Japan last year is frame rate issues. While the graphics of Rune Factory 5 are far from flashy, they still seem to push the Switch to its limits. Fast-traveling or stepping outdoors results in a noticeable lag as the world forms around the character. Worse is the lag as the world pops into place when waking up and walking outside the character’s second-story bedroom. Taking multiple monster or human party members into combat can slow the battle system down, something most especially noticeable during boss battles. Between the large size of most boss monsters and the effects marking their attacks, multiple party members plus a hero all attacking and moving around at once can drop the frame rate to something that feels close to half of its regular rate. While this doesn’t present a significant progress issue in itself with multiple well-leveled party members helping boss battles end quickly, for those players relying more on their action combat skill on higher difficulty settings, the huge frame rate drops could become a major issue. 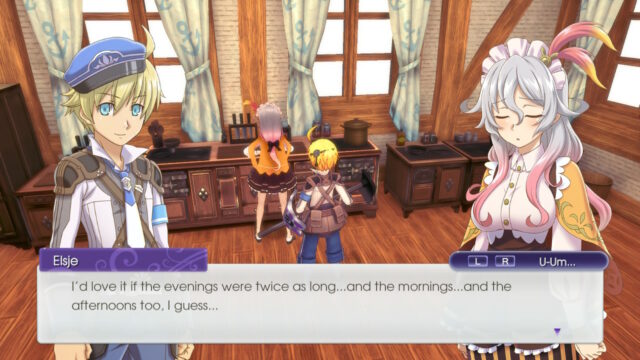 No worries, Elsje, Rune Factory 5 did exactly that with with its real-world to in-game time ratio.

While frame rate drops and the side stories progress issue present notable downers, a lot of quality-of-life improvements made in Rune Factory 5 definitely help elevate the game to compare favorably with the best of the series. Some of the improvements are immediately recognizable while some may take more of a keener eye to spot but are helpful nonetheless. First off, resources such as herbs, stumps, and rocks regenerate daily if not more often, and not just on farmland. Larger stumps and rocks can be broken down with even the lowest-level farm tools, allowing for immediate clearing of land for crops. When farming, repeatedly pressing the B button will allow the character to continue the previous farm action in whatever direction they’re facing, allowing for quick and easy plowing or watering in straight lines without the need to physically move the character along with the directional stick.

Switching between farming and fighting couldn’t be easier as a farm tool and weapon can both be equipped at the same time and quickly changed between with a touch of the D-pad. Finally, and most importantly, the clock has been slowed down. While most Rune Factory games to date equated one second of real time to one minute in-game, Rune Factory 5 doubles the amount of time it takes each in-game day to go by. To non-veterans, this may not sound like a big change, but it gives players much more freedom and less pressure to act. Since there are penalties for players staying up all night in the game and dropping from exhaustion, having twice the playtime for each game day seems like a huge gift. This gives players enough time to potentially tackle dungeons or work through larger farm upgrades in a single game day, as well as to deal with calamities and still have enough time for the scheduled festival to run.

If it’s not abundantly clear, I thoroughly enjoyed my five dozen hours with this game. Though I didn’t complete a romance, I look forward to that in the endless post-game. There are definitely some notable issues, and players’ experiences are going to vary in response to those, especially since since they have lingered in the Japanese release, but they never detracted from the core gameplay loop for me. Rune Factory has always been a chill experience with some light action RPG elements to it, and that’s exactly what the newest title delivers.