What’s in a Name?

Aniplex and Deskworks’s RPG Time: The Legend of Wright is self-described as a “handmade notebook adventure”. The game has players going back to elementary school where they meet a young classmate who dreams of becoming a game developer. The game is eager to define itself as an RPG, but it’s more accurate to call it an adventure game with light RPG elements. While not all of the elements gel together to make a fully cohesive experience, RPG Time: The Legend of Wright details a fascinatingly unique story about the limitless imagination of children, asking players to remember when they were children themselves filling pages with ink and adventure.

The story of RPG Time is simple: players visit their classmate Kenta in an empty room after school, where he shows off his special notebook. Kenta has poured endless hours into developing his own RPG replete with stick figures, cardboard cutouts, and tape to hold everything together. He invites the player to visit the world of Cardboardia, where the brave knight Wright has been tasked with saving the kidnapped princess. To do so, Wright must face the elements, solve puzzles, and brawl with enemies as he makes his way to the princess. While the story within the story appears simplistic, the title is constantly oozing charm. The localization is well-equipped with clever humor-filled references to older games, while providing great characterization of an omnipotent gamemaster that has the limitless creativity of a child. The sense of imagination is inspired and present throughout. 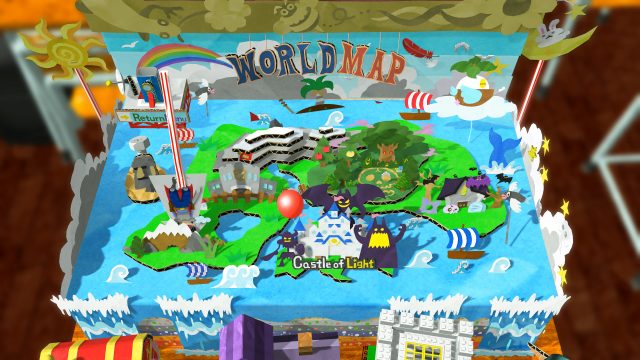 RPG Time takes the pop-up visual aesthetic and folds it into overdrive.

The entire game is played through Kenta’s notebook, sitting upon a schooldesk, which serves as the user interface. The developers have a clear passion and vision for this title, as both the notebook and the desk are teeming with minute details, while gamemaster Kenta is equipped with measuring tape as well as a pencil and eraser to make changes on the fly. It is simply a joy to behold the visual spectacle of this game, brimming with enthusiasm for the genre. The desk is constantly shifting, as objects are shuffled around while the students sit at the desk continue to play. This level of detail also carries over to the characters and on-screen enemies as well, with ornate bosses taking up the entire screen with their paper components stiffly shuffling as they attack the player. The art style is audacious to imagine, even more so to execute, and incredibly impressive to behold.

Aside from the bright colors on the ever-changing desk or the pages of the notebook itself, everything on screen is assembled from ordinary items accessible to a child; it’s both impressive and amusing to watch paper clips, crayons, tape, and other school supplies cobble together into set pieces. The extraordinary use of the mundane really brings life to the in-game universe. Every design choice serves as a reminder of how imaginative children can be, bearing testament to the playfulness and creativity of the team at Deskworks. These same supplies serve as equipment for the player to solve puzzles which are thoughtful and clever, though some of the more confusing puzzle segments can require trial and error. The worst of these puzzles offer vague directives that leave players guessing the solution, with failure typically resulting in returning to the beginning of the section and repeating the entire section. This is cumbersome when having to repeat the accompanying story sequence over and over again, as they are impossible to skip.

While the developers clearly love tabletop role-playing, it is frustrating how few of the genre’s video game elements are represented within the game. There’s a limited and simplistic turn-based battle system that is seldom used, simply due to the sheer number of other game styles on display. Players can expect to solve puzzles in a variety of ways, engage in QTE-type battle events, and a slew of other mini-games to get through this adventure. Some of these ever-shifting game mechanics are more successful than others. The boss fights are among the game’s most exciting moments, and those too are unafraid of changing genre, sometimes even mid-battle. 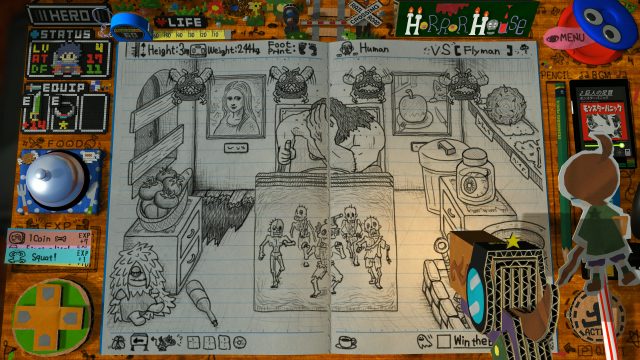 There are a few oddities that hold this title back. The game is very text- and dialogue-heavy but lacks options to increase text speed, which will frustrate some players. It’s doubly frustrating when having to repeat a particular section a number of times. The music is serviceable and complements the in-game universe, although there are very few standout tracks. Once again, if players are redoing a particular segment a number of times, the soundtrack can begin to grate as the simplistic tunes can be overly repetitive, enhancing the frustration.

For such a love letter to the genre and video games as a whole the game could have more role-playing mechanics to drive the point home. Instead, the Legend of Wright feels more like a visual novel or adventure title that tries to tie together a love of gaming through contrasting game mechanics. The charming visuals may give the impression this title would make a great introduction to RPGs; however, the heavy reliance on text and ever-shifting game styles are not for everyone. While some RPGamers will enjoy brief forays into the myriad subgenres of RPGs, others may be overstimulated and underwhelmed.

On paper, RPG Time: The Legend of Wright is a dazzling love letter to gamers and creators alike. Boasting a unique art style and an audacious commitment to its core gimmick, this is very much a title for gamers that remember doodling in their notebooks all those years ago, dreaming of their own creations. While gorgeous to look at, the game suffers from a bit of an identity crisis, as it is overstuffed with a few too many disparate gameplay systems. However, even those who do not find the gameplay compelling may appreciate the sheer ambition of Kenta’s tale.