Now Every Day is Leg Day

History has shown that Nintendo isn’t shy about inserting gimmicks into its games. Take a trip down memory lane to remember peripherals like the Power Glove or R.O.B., for instance, or look back on much more recent examples like Skyward Sword and its controversial motion controls. Purely using a gimmick to interface with a game can be a wonky proposition, but Ring Fit Adventure manages to do it right; the Ring-Con resistance band peripheral isn’t so much used as a means to play a game, rather than the game itself being more of an added bonus. That might not sound particularly worthwhile, but the fidelity in which the peripheral is used to actually provide a formidable workout makes it a qualified, and surprising, success.

Ring Fit Adventure turns out to be very easy to pick up and play, with straightforward instructions for operating it and pulling off the requested exercise moves. The Nintendo Switch’s two Joy Cons go their separate ways here: one slides into the Ring-Con, registering every push, pull, tilt, and twist during the workout routine, while the other is resting snugly in the Velcro Leg Strap, attached around the player’s left thigh, where it serves to measure running in place, high-stepping up staircases, and positioning for certain workout routines like push-ups and planks.

A typical workout session while playing Adventure mode revolves around having the on-screen athlete navigate levels set in a fitness-centric fantasy world. The ultimate goal is to help the sentient Ring take down his old nemesis Dragaux, a bodybuilding dragon who serves as the final boss in each world. Movement is done via various aerobic exercises, primarily running in place (though a lower-impact setting exists for those with downstairs neighbors), though other exercises are used to get across certain terrain, like high-stepping for staircases, or hip twists to paddle across water. The path is fixed, with occasional branches in the road, and along the way the Ring-Con can be squeezed or pulled to collect coins, break open chests, shatter rocks in the path, jump across barriers, and other incidental actions, adding good variety to the run. 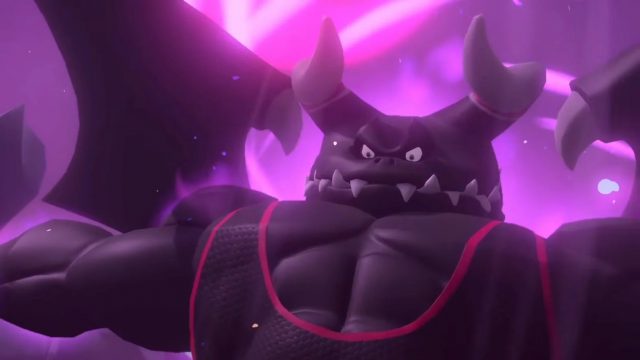 There’s something undeniably Toriyama-like about this visual design.

While the stages themselves spice up the Adventure workout with on-the-fly physical tasks, enemy encounters get a little more serious. Enemies can appear solo or in a group, with the game typically easing new enemy types in through one-on-one encounters at first. In order to deal damage, players must perform full sets with multiple reps of particular exercises, choosing from a previously curated list of unlocked exercises. Attacks differ in intensity and range, with some damaging multiple foes at once, while others can be used to regain health. All exercises go on a short cooldown after usage, forcing players to switch up their sets. Enemies and exercises are also color-coded, with each color corresponding to a particular muscle group; attacking a red enemy with an exercise focusing on the arms (also colored red), for example, yields bonus damage against the foe. Each exercise is presented with a helpful on-screen icon to remind the player of the correct stance and execution, as well as verbal reminders that help improve posture and push just a little harder. Conversely, squeezing the Ring-Con into flexed abdominals serves as a blocking maneuver to mitigate incoming damage during the enemies’ attack phase.

While Adventure mode is hardly a gripping tale full of excitement and thrilling action, it is still a pleasant way to keep your mind occupied while you’re breaking a sweat. Things start out quite basic, with easy stages and only a small handful of exercises to cycle between. It’s easy to get the impression this early on that the game will remain a cakewalk: experience points accrued quickly boost one well beyond the recommended level for the early stages, and the toll on the player’s body is fairly minimal. Give it a few sessions, though, and the challenge bar rises appreciably: enemies appear in greater numbers, boast more challenging abilities, hit harder, and take more damage; stages become tougher to deal with; and the player’s repertoire of unlocked exercises expands significantly. In fact, it’s impressive how many different workout sets have been implemented with the same two pieces of equipment, including cardiovascular moves and even yoga poses. An in-game timer keeps track of how much time one is actually moving during a game session; during a thirty-minute block, only a little over ten minutes is spent exercising at first, but as the body adjusts and the athletic arsenal expands, players will feel more inclined to push for longer and more intense workout sessions.

To complement the stop-and-go of Adventure mode, there are several further workout options included in Ring Fit Adventure. Quick Play lets players choose from any routine or mini-game on the fly and spend time targeting specific exercises or even entire muscle groups. Players can also build custom workout routines by stringing various sets together. Multitask mode even offers an incentive to workout away from the Switch, which is already portable, by taking the Ring-Con along when pursuing daily activities, using it to literally squeeze in some extra muscle-building, say, during a work day at the office. Once the game is started up later on, the stored activity info in the Ring-Con will translate into bonus XP in the game, which affects defensive and offensive battle stats each time the player levels up. RPG staples abound, like equipping matching workout gear for stat bonuses and collecting ingredients to make healthful smoothies and soups to provide a HP boost in a pinch. Even grinding is encouraged — at times even necessary — through replaying any previously-completed stage. 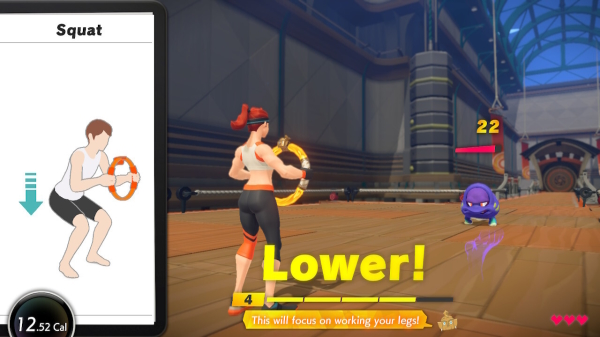 Workout battle are this game’s bread and butter, er, I mean fruit and veggies.

There are a couple of nitpicks to point out — not issues with the game itself, but niggling annoyances that rear their head thanks to the nature of the peripheral devices needed here. The Velcro Leg Strap has a hard time staying in place — not surprising, as anything wrapped around a vertical appendage constantly in motion as it expands and contracts is wont to do. Wearing it directly on the skin helps, avoiding slippery workout clothing material, as does cinching it extremely tight, though neither solution is ideal. Then there’s the issue of getting the Joy Cons prepared for normal Switch gaming again; syncing with the game reorients the controllers as needed, and requires a manual change after each workout session. However, these are minimal complaints when stacked up against the victory of having a tool that can actually keep one motivated to exercise and get healthy.

Nintendo saw fit recently to add a few cherries on top of the already-satisfying Ring Fit Adventure experience in the form of a free update that added, in addition to some extra voice and language options, an all-new Rhythm Game mode, which has the player working out on cue to a handful of music tracks pulled right from Super Mario Odyssey, The Legend of Zelda: Breath of the Wild, Splatoon 2, and Wii Fit, as well as Ring Fit Adventure’s own soundtrack. While it’s certainly a welcome addition, it still feels a little anemic at this point, with seventeen tracks in total, only five of which come from other games. But this has certainly opened the door for some excellent possibilities for future expansion of the game, with perhaps more musical variety and even other clever ways to burn the calories.

By design, Ring Fit Adventure is impossible to gauge by the same metric as just about any other game, on Switch or elsewhere. It would be easy to dismiss it merely as a novelty, as other peripheral-based games certainly have been in the past. But that would be doing a disservice to the ingenuity with which the designers have found a way to get players to try out a workout routine and, even more impressively, stick to it. It is well worth the money; despite some easy early stages, it isn’t long before the game asks you to push yourself in continually productive ways. And there is a lot of variety and customization to your workout routine already built in, with further potential updates perhaps just around the corner. For those who have bounced off of other at-home workout products, Ring Fit Adventure makes working out as entertaining as it is satisfying, avoiding the deadly monotony most other exercise programs eventually run into.