Choose Any Other One

Before playing Record of Agarest War: Mariage, I knew two things about the Agarest franchise. The first is those earlier entries were SRPGs that incorporated some visual novel and dating sim aspects in combination with a multi-generational timeframe where successive generations of heroes carry on with the story. The other thing I knew about Agarest was the great challenge the series has presented those attempting to review it. Mariage continues the franchise’s penchant for pairing off heroes to sire subsequent generations, thus continuing the fight against evil. This time, however, it marries those familiar trappings with a traditional turn-based combat system with no grid-based strategy maps in sight. While Mariage has some surprising moments of promise, the overall experience has me ready to file for divorce.

The first screen players see when starting Mariage is a warning that the game contains sexual situations and a statement that all of the characters are certainly over the age of eighteen. These quickly manifest in scenes involving bananas and girls falling into eel ponds. These sorts of adult hijinks culminate in an affection ceremony where the player touches the girl in various places using the cursor to elicit moans. Success means a higher affection level with the girl in question and one less layer of clothing. If these sorts of interactions, which Mariage has an abundance of, are troubling, the game likely won’t be the player’s cup of tea.

Mariage was originally released as a PSP game in Japan back in 2012. While there are plenty of — perhaps too many — turn-based battles, there are many times where the game feels like a visual novel first and RPG second. There are absolutely no environments to explore. While it may not be uncommon to have a world map that consists of points connected by lines, in Mariage, even the dungeons are reduced to this limited graphical representation. While this may be a series’ staple, it makes for an odd fit with a traditional turn-based RPG.

The characters are thankfully more detailed, using the typical Compile Heart style of facial expressions and movement that manage to inject some life into otherwise rote visual novel trappings of character portraits talking at one another. However, the character portraits are limited to the main cast of heroes and villains. Interactions with other NPCs are done with no character models present on screen, or sometimes the main character will just monologue what happened off-screen to the rest of the cast so there isn’t a need to have another model. These sorts of shortcuts are readily evident during combat as well, where palette swaps are plentiful. 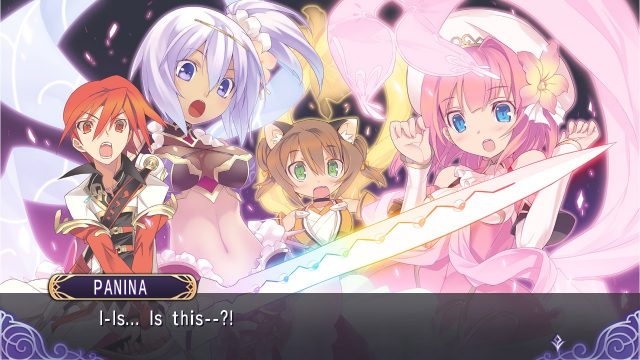 Look as the girls all marvel at Rain’s giant glowing “sword.”

No one expects every game to be the pinnacle of graphical perfection, but the utter lack of graphics in Mariage detract from the experience. There’s only so many times a player can move a character model along a line in a dungeon or fight a pallete-swapped demon cat for the umpteenth time. A game with this much combat really requires at least some graphical flair to carry players between visual novel segments. There have been some visual upgrades from the native PSP resolution to the fixed 720p that the PC version supports, and the visual novel portions and interface are perfectly serviceable, but muddy, low-res textures in combat quickly remind players that the art assets were intended for a screen with one-third the resolution.

The combat system itself is a decent turn-based affair with battles that move quickly. The player’s party of four is broken up into the roles of Attacker, Healer, Supporter, and Defender and these classes determine the magic attacks and special moves a character can perform. Turn order plays a big role as the hero Rain can pull off a Link Attack in combination with the other maidens in the party, using a large amount of magic to do significant amounts of damage to enemies. It makes for an interesting bit of strategy that requires players to figure out when to use these huge attacks and when to save MP. On first blush, the system is quite enjoyable.

And it would continue to be if the game were better balanced. The difficulty in Mariage bounces all over the place. Many random encounters will be of trivial difficulty, and goodness are there a lot of random encounters, and they are then followed by a boss that can stomp all over the hero’s party. It’s a shame because the basics of combat are fun, but vacillating between no challenge followed by frustration does not result in an enjoyable time. 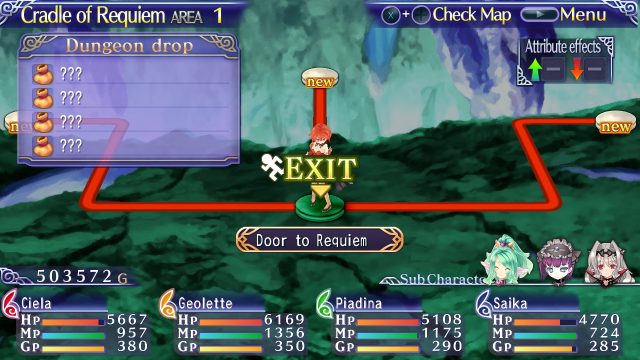 Given the uneven experience in combat and the lack of graphical engagement, it falls to the story to try and carry Mariage. The narrative opens with the chosen one, Rain, and his three maiden companions Felicia, Kunka, and Panina, who are on a quest to defeat the archdemon Eclipse. This conflict between heroes and the archdemon has been ongoing for generations, with the archdemon being defeated and sealed away each time only to come back after possessing a new victim, regaining its power. The heroes, meanwhile, pass on their powers to their offspring, who are then tasked with fighting the next incarnation of the archdemon. Rain is merely the latest in a long line of heroes and now it’s his turn to confront Eclipse, as well as find a maiden who he can sire the next generation of heroes with. The interactions between the characters are pretty entertaining when the game isn’t being completely juvenile, though the buffoonish antics of BUTCHER — a group of pigs that are also attempting to conquer the world — are enjoyable. There isn’t anything revolutionary about the narrative, but it’s perfectly serviceable fluff when it isn’t focused on chasing the lowest common denominator.

As Rain and company work their way towards the giant tower where Eclipse has ensconced himself, Rain has to pick one of the maidens to continue the hero dynasty with. In order to get one of the girls to pair off with Rain, their affection levels must be increased by doing side events, using certain items in battle, and performing link attacks. This mechanic is not an optional part of the game — nor are the aforementioned affection ceremonies — and if the player reaches the archdemon without maximizing one of the maiden’s affection levels, further progress is blocked. The only way to solve this impasse is through more grinding. There has to be another generation after all.

Once Rain has paired off with one of the maidens and the archdemon is defeated, they have a kid together. This will be the special child that will break the cycle and defeat the archdemon once and for all. The player gets to choose the gender of the new hero and select preferred abilities for the parents to pass on. There’s something that’s fun about that generational switch and having the second-generation hero be a melding of Rain and his chosen maiden. It’s just a shame that Mariage doesn’t do more with its two generations as the second generation plays out as a carbon copy of the first. 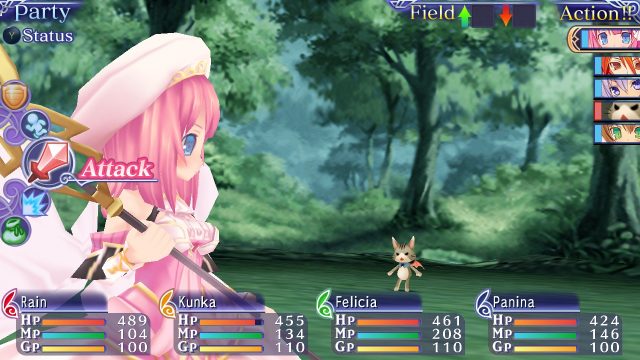 The equally promising progression system also, unfortunately, falls equally flat. Players can gain levels by defeating enemies, but there is also a level associated with each of the four classes, encouraging players to classes assigned to each character. However, the most important part of player progression is keeping up with skill upgrades at the shrine, where abilities and stat buffs are locked behind random item drops. If the player isn’t paying attention to what items are preventing progress, it can lead to backtracking and… more grinding.

The one real highlight of Mariage is sound design. Voice acting is entirely Japanese, but the performances are excellent and impart a lot of personality to the characters. The soundtrack is also surprisingly good and catchy. It perhaps could have used a little more variety, but even with lengthy grinding sessions, the battle themes never get old.

Mariage is a game with some decent ideas that are completely undone by execution. The concepts for the battle system are good, but balance is lacking. The idea of carrying over stats to a second generation is enticing, but there is so much grinding that any interest will be sapped long before reaching the end. Mariage‘s adult-oriented material will also narrow its player base somewhat. There’s just not enough good about Mariage to balance out all the issues the game has. Mariage is not an experience players will want to make a long-term commitment to.