Great Artists and Thieves Are Similar, They Both Know How to Steal Your Soul

Persona 5 certainly isn’t the first game in the series to receive a big change in its gameplay for a self-contained sequel. While Persona 4 Dancing switched to a rhythm game, Persona 5 Strikers keeps things in the RPG realm, with Atlus tapping the talents of Koei Tecmo’s Omega Force studio to create an action-packed experience. Despite this change to an action RPG, Strikers is a triumphant return for the Phantom Thieves, with familiar elements translating smoothly to the new combat system and providing an excellent story that lets players thoroughly enjoy spending more time with the gang, balancing the two with confidence.

Though Persona 5 Strikers tells its own separate story, players will definitely want to be familiar with the events of Persona 5 as most of the story elements are not explained to newcomers. After going their separate ways following their escapades of the previous year, Joker returns to Tokyo to meet up with his friends and hopefully enjoy a fun summer vacation. The Metaverse has other ideas, however, as the Phantom Thieves get sucked back in to clear their names after they become the primary suspects for a number of incidents across Japan resembling their past deeds.

The plot reuses some familiar themes, and experienced Persona players will be able to see some of the story beats coming, but it remains a well-told and highly entertaining story with strong pacing throughout. Its placement as a canonical sequel works in its favour by creating a story that fans have more reason to care about, but where Persona 5 Strikers absolutely shines is in its character interactions. The bonds between the Phantom Thieves are on full show and the game makes great use of their established personalities, while showing that they still have plenty of growth and work ahead of them in order to accomplish their future goals. The balance between the more lighthearted escapades as the cast gets to enjoy some downtime and the more emotional and dramatic conversations is spot on, and Atlus’ excellent writing and localisation are once again on full display. 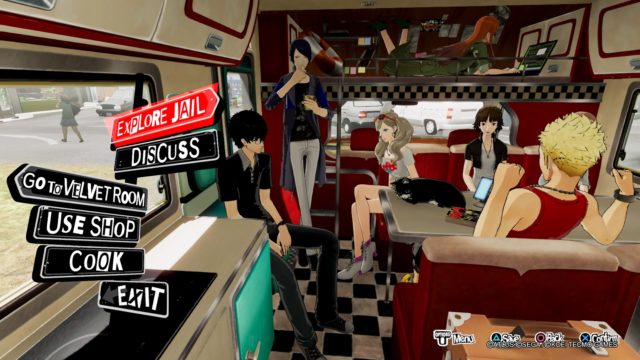 The Phantomobile (name subject to change) acts as the base of operations as the Phantom Thieves cross Japan.

Sophia and Zenkichi are the two biggest additions to the cast for Persona 5 Strikers. Sophia is an AI dubbing herself humanity’s companion who Joker and Ryuji come across in their first return to the Metaverse, living in Joker’s phone in the real world but manifesting fully as a new party member in the Metaverse. Zenkichi is a member of public affairs tasked with investigating the new incidents and the Phantom Thieves, letting them know that they are under suspicion. Both characters feel right at home in the game and make their own memorable marks on the story. Sophia quickly becomes one of the most endearing cast members, while the teasing in both directions between Zenkichi and the Phantom Thieves makes for plenty of entertaining moments.

Meanwhile, the Jail Monarchs of Strikers are given more depth than most of the straightforwardly easy-to-hate Palace owners of Persona 5. The game ensures that there are sympathetic causes behind many of their actions, though thankfully these aren’t used to absolve them of their misdeeds. Nearly all of the Confidants from Persona 5 are absent from Strikers, as well as Social Links and the time management elements, but the game doesn’t feel like it loses very much because of it; the relationships between the Phantom Thieves get to take centre stage and the story stays the primary focus.

Persona 5 Strikers also strikes an excellent balance between the story and gameplay elements. The near-equal attention paid to each helps alleviate the general repetitiveness common to Omega Force’s previous Musou-like spin-offs and leaves Strikers feeling much more like a bespoke title than the studio’s past linkages with other series. The combat is still naturally based on Omega Force’s formula of masses of enemies punctuated by tougher enemies, but the rest of the gameplay much more closely matches that of Persona 5. The game features the same sort of dungeon-crawling Palace infiltrations of Persona 5, with the new realms referred to as Jails and featuring altered versions of the real-life locations, with each wave battle taking place as a regular encounter. 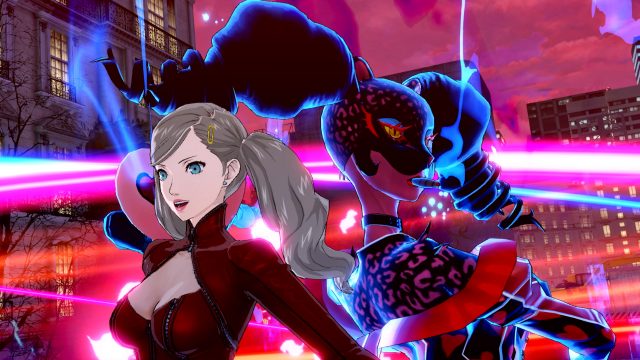 The Phantom Thieves get to show off some more flashy moves.

The audio is once again at the top of its game, including a mixture of familiar, new, and remixed tracks, with the new tracks include some very welcome new songs featuring vocals from Lyn. The voice acting is also superb, with all of the returning cast members retaining their actors from Persona 5. Visuals keep the stylish Persona 5 look that fully permeates across the game, with sharp and pleasingly animated UI elements. Animations are smooth and the combat is pleasing to watch, while the game’s cutscene direction is also strong. The only downside is that the graphics come with the familiar aliasing issues of recent Omega Force titles, resulting in noticeably ragged edges on the character models and environments throughout the game, made all the more apparent by the fully-animated cutscenes.

The effort Atlus and Omega Force have put into translating Persona 5′s combat from turn-based to action is readily apparent. All of the familiar Palace infiltration elements are included with players able to ambush enemies by sneaking up from behind or leaping at them from the environment to gain a major early advantage. There are some light puzzles, but these simply amount to finding the path forward. Party members can’t be changed during combat, but players can freely Baton Pass to control a different character and the AI ably takes charge of the other members — using healing skills, attacking, and staying out of too much trouble — though players will still need to intervene in certain situations.

The game’s combat features the traditional Musou regular and strong attack combos with each member of the Phantom Thieves fighting slightly differently, but no major changes in play style are needed. Where Persona 5 Strikers deviates from other Musou titles is its pause-to-plan option. Upon opening the item menu or preparing to use a Persona skill, the game pauses and gives players freedom to plan their next move. The game comes fully equipped with Persona 5′s elemental weakness system alongside extra attacks for hitting said weaknesses and the opportunity for the party to go all out on downed enemies. In addition, players can make use of items in the environment: jumping up to a lamp post to swing down and hit all of the enemies congregated around it, or grabbing a skateboard from a rack to ride right through any nearby groups. 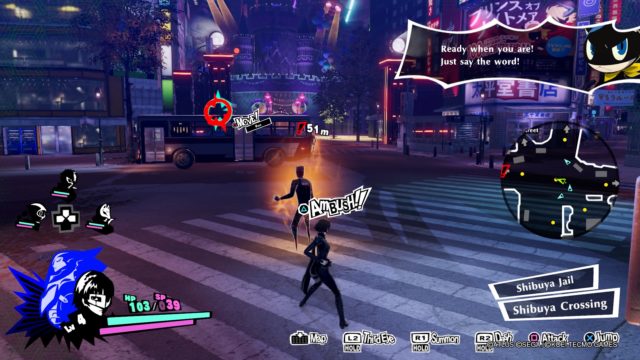 Atlus and Omega Force have put an impressive amount of effort translating the turn-based battle system to Musou-style combat.

Battles remain exciting, with most regular encounters ending appreciably quickly. The boss fights are well designed and make for excellent, showy finales for each of the Jails. The controls work well and though there are a lot of things going on with the combat system at first glance, it doesn’t take too long to get the hang of. There are a few little issues, however. The camera angle can be hindered by the environment, while the lock-on system makes it far too easy to lose track of the enemy one wants to follow.

Another minor annoyance is SP management, as the skills can quickly gobble up each character’s SP and restorative items are slim, especially in earlier encounters. There’s no cooldown for using items or skills, so a limit is necessary to prevent players from simply spamming Persona skills, but it just feels a bit heavy-handed. Players can at least freely leave the Metaverse from its numerous checkpoints and come straight back in with health and SP completely restored — and can also change difficulty at any time, including when retrying a lost fight — but forcing them to exit all the way out of the dungeon instead of the game simply letting the checkpoint act as a restore point just makes the process take much longer than necessary.

The balance can swing back and forth a bit, as certain enemies’ move sets or strengths prove more challenging to mitigate in the first go around, but most of those difficulties can be overcome readily, be it through a quick change in party members or simply knocking the difficulty setting down. In general, the normal setting offers a decent level of challenge, letting players string together plenty of powerful combos but still requiring that they make full use of the options available in addition to paying attention to enemy attacks and the status of party members. The presentation and sense of style help to ensure that the gameplay remains strong and thoroughly enjoyable throughout the game’s forty-to-fifty-hour runtime. 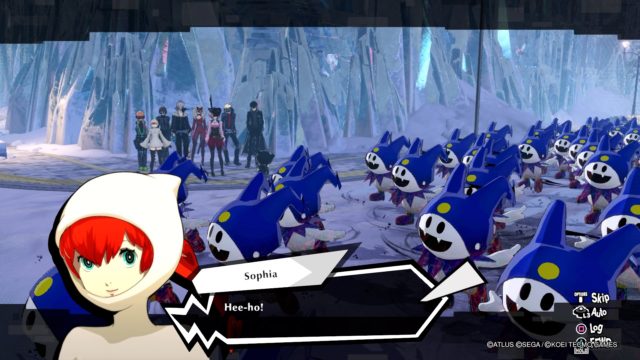 Character growth is largely the same as in Persona 5, with everyone starting again from the beginning, including Joker only having Arsene as his Persona. The fusion system returns, so he quickly builds up his stock and can once again freely change between Personas, though the system stays more straightforward in Strikers, lacking many of the more advanced options Persona 5 ends up with. In addition to fusion, new Personas can be found through Masks picked up from defeated enemies in place of demon negotiation and players can readily level up specific Personas by spending points earned from combat. The same weapon, armour, and accessory equipment options from Persona 5 are present, with the biggest difference being the replacement of Social Links with the new Bond table. The Phantom Thieves’ Bond level raises from both events and combat, providing points that can be spent on an assortment of passive upgrades. It’s another straightforward but enjoyable system that just adds a nice extra layer to proceedings.

Though Persona 5 Strikers is primarily a linear title, it contains a decent number of side requests that usually requires players return to a previous Jail and defeat certain enemies. The requests provide worthwhile rewards of items or unlocks — plus a few extra scenes and conversations for the Phantom Thieves — and never take too long to do, with the location switch helping to break up some of the dungeon-crawling parts. There isn’t a New Game Plus, but loading a cleared save file will let players return to just before the final boss with a good number of extra challenges opening up.

Though the very nature of its story means it isn’t really an appropriate place for newcomers to leap in, Persona 5 Strikers is absolutely a treat for Phantom Thieves fans. Atlus and Omega Force have ensured that as much as possible of what made Persona 5 so beloved has been transported here and put into an appreciably tight package. Spending extra time with the Phantom Thieves and travelling with them across Japan is a much needed positive experience and well worth it.