Where Is My Mind?

Mugen Souls is the latest title from developer Idea Factory, published in the US by NIS America. Taking many ideas and themes from NIS’s own Disgaea franchise, Mugen Souls provides an RPG adventure that starts off quite promising despite an over-abundance of moé. Sadly it quickly devolves into an adventure in overly long dialog, endless grinding, boring objectives, and tedious battles filled with complicated mechanics that neither add much to the experience nor help the player win. Even good voice work and a translation that brings decent humor to the table at times can not save this game.

The story starts with the self-declared undisputed Goddess Chou-Chou proclaiming her intentions to conquer the universe by making the seven worlds her peons. Together with her first companions, Altis and Ryuto, the story jumps right into the conquest of these worlds and slowly leads to revelations about Chou-Chou’s past. Each planet features a similar story to the next, involving tracking down the hero and demon lord of each planet. At first this proves to be a good opportunity to make fun of video game clichés and pull off Disgaea styled “evil but not really evil” characters. The story then quickly devolves into typical game and anime clichés that grow tiresome just a few hours into the game. Most of the characters are highly one-dimensional as well, repeating phrases and actions matching their character archetype over and over throughout the course of the game. While this is common in many games of this style, it’s taken to an annoying extreme here. By the time actual story revelations begin to take place, they have little impact because the player will simply have no emotional attachment to the characters.

The story tries and at times succeeds at being funny, partially thanks to the efforts of NIS America’s translators. A large part of the craziness involved in the game’s story revolves around moé and vague sexual themes that are never handled with any kind of maturity. There’s nothing highly offensive here given that content has been removed for the domestic release, but what’s left over is hardly much better. Instead, the images and jokes come off as a failed attempt to distract the player from gameplay failures. 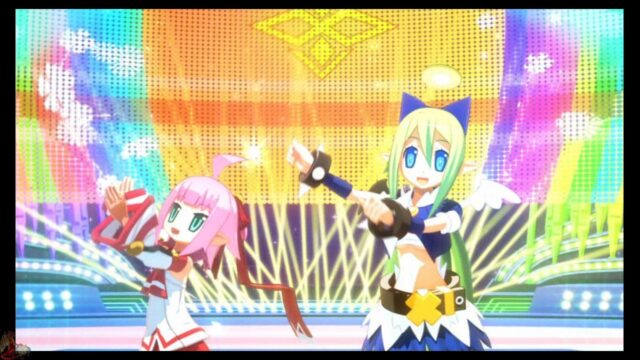 Do the moé dance!

Despite Mugen Souls throwing a large number of complicated systems at the player, gameplay is relatively simple. The player will be tasked with exploring areas on each planet, traveling to event points marked on the map that continue the story, fighting enemies, and finding occasional treasure. The areas look colorful enough but the problem is there’s nothing really to explore. There are no optional dungeons or towns, so there’s little point to exploring beyond finding the odd treasure chest or two. Enemies are seen on screen and, as has become typical in many JRPGs, the player can press a button to swing at an enemy to begin combat and get the first attack, while getting hit by the enemy first does the opposite.

Combat is where the previously mentioned complicated systems come into play. Using a party of up to four characters, the player can move each one a certain amount and launch attacks on their turn, giving battles a more tactical feel than the typical JRPG.  In addition to standard skills based on a typical MP system, the party shares a pool of points that increases from various actions such as killing enemies, which can be used for super skills. Characters can also use skills to launch enemies into each other and around the battlefield for extra damage. Chou-Chou has a special skill in combat called moé kill. She can turn into various character archtypes such as “sadist” and “terse” to match the tastes of the monsters, and then choose from a selection of words to try and match them to the monster’s current mood. If successful, it will increase a meter towards turning them into a peon. If unsuccessful, it increases another meter that raises the power of the monster. It’s an interesting idea that ultimately proves to be tedious, confusing, and a complete and utter waste of time.

Turning monsters into peons increases the power of Chou-Chou’s spaceship. The infrequent spaceship battles are simple rock-paper-scissor type affairs where the player can choose between various kinds of attacks and defenses. With the vast majority of these being utter cake walks until the final few story battles, there ends up being little to no incentive to even waste time turning monsters into peons. Even with an under-leveled ship late in the game, the story ship battles can be overcome by abusing a few powerful skills. Players will be left scratching their heads over why so much time is spent going over the system when it ultimately adds nothing to the game.

Confusing design decisions continue in the way the player advances through each planet. The player unlocks new continents to explore by moé-killing the current continent, which involves capturing various points on the map. There are three methods: either paying in gold, having a certain overall kill count, or utilizing a moé kill point. The moé kill points are the same as in battle, except the player must guess from a hint which of Chou-Chou’s forms the points are attuned to. The gold points simply give the name of an item in the game’s store, which the player then has to give gold equal to or greater than the cost of the item. The first two aren’t so bad, but the battle points prove to be incredibly tedious. The balance of the game’s battle system is way off. Regular battles for the vast majority of the game are incredibly easy and quickly become annoying. This means players will start skipping battles and then find they have to grind through a bunch of them to capture these points. 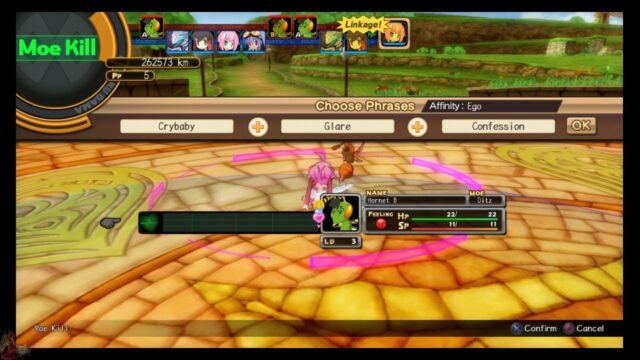 For those in need of easy battles and other events, there is the Mugen Field.  While similar to Disgaea‘s random dungeons, it unfortunately doesn’t provide nearly the same level of entertainment. It is a simple string of battles intended to help the player gain new skills, level up old skills, or add defense item slots among other things. These add little to the game, as leveling skills mainly increases their MP cost for little gain, and new skills take forever to acquire. It mostly serves as a place to grind for levels, and with the game’s massive endgame difficulty spike the player will be spending a lot of time there.

In addition to the story characters available to level, the game allows the player to create characters. Sadly, the level of commitment required to make these characters battleworthy is so high that they aren’t really worth the effort. At the end of the day, the game’s convoluted mechanics just don’t hold up to the massive number of battles that are thrown at the player, and the huge difficulty spike later in the game does not help.

The graphics and sound don’t help matters much either. The game has a colorful anime look to it that is fine, with animated portraits during conversations like those that have appeared in recent Idea Factory games. In engine graphics are all cell shaded 3D that don’t look quite as good as the 2D images. They aren’t horrible, just mostly unremarkable with a mix of mediocre and decent attack animations in combat. The real problem with the graphics comes in the form of awful loading times. Loading between areas is lengthy on its own, but battles suffer from constant load times between nearly every action. The game stalls before enemies move, before enemies attack, and even before player characters attack. The game offers the option to turn off animations, but this doesn’t reduce loading at all. Even with the optional data install, the already tedious battles are still hampered with constant loading. The lackluster sound effects don’t help matters much, as they are repeated for many attacks and don’t add much impact to abilities. The music is a forgettable soundtrack filled with Disgaea-esque tunes, but none of the tunes could be called awful.

All in all, Mugen Souls turns out to be an incredibly frustrating game with some good ideas that quickly get lost in the grind. Despite making fun of clichés at times, the story ends up being an overly long affair dragged down by the very clichés it makes fun of. Tedious, boring, and insanely frequent combat encounters are made all the worse by required grinding and a giant spike in difficulty after much of the game is a cake walk. The frequent pandering elements of the game’s story and visuals can’t hide its borderline broken mechanics. Even the most ardent fan of JRPGs will find little to like about this grindfest.