Laughing in the Face of the Temporal Prime Directive

While Inazuma Eleven is a series that Nintendo of America has sadly neglected, its European counterpart has been steadily supplying the region with the highly entertaining and melodramatic adventures of Raimon Academy’s football club. Now up to the fifth overall title, which is the second part of a trilogy for this new character generation, Inazuma Eleven GO Chrono Stones ably carries on the series’ traditions with a ridiculous tale that spans the ages. Although the game’s beginning is weaker than usual, it’s another enjoyable experience that will keep fans of the series happy.

The story doesn’t necessarily need past knowledge of the series, but players will miss out on a huge chunk of characterisation from the previous title if they do leap in here. Chrono Stones begins with team captain Arion Sherwind awakening to discover that all traces of football have mysteriously disappeared from the world. Arion himself is soon accosted by a figure who attempts to remove his memory of football, before he is saved by new character Fei Rune and his robotic bear companion, Clark von Wunderbot. Fei explains that he is from the future, where an organisation called El Dorado is attempting to remove all trace of Arion’s beloved sport from the timeline to prevent the ascension of Hyper-Evolved Children.

The story is at its weakest early on, as it tries to play things a bit too seriously in the setup. Things get considerably better and much more in touch with the craziness that Inazuma fans have come to love, however, once the gang reunites and goes back in time to collect the spirits of various historical figures such as Joan of Arc and Oda Nobunaga (and, for some reason, dinosaurs) before the story reaches its appropriately ridiculous climax. The time-travel elements are of course completely nuts and paradoxical, but after the early missteps Chrono Stones is good at just rolling with these things, making such concerns far less of an issue and allowing players to just enjoy the ridiculous ride. 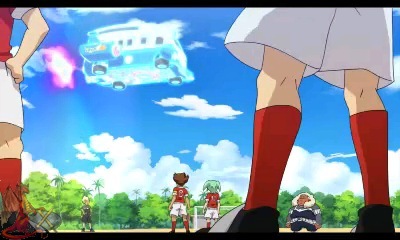 The Inazumabus makes a triumphant return with some new abilities.

It helps that the Inazuma charm stemming from its focus on teamwork, friendship, and general love of football remains fully present, with its cast and incredibly loose take on historical events just adding to the fun. This is particularly present in InaPics, a bulletin board-esque replacement for the iNattr social media, where the cast will entertainingly chatter away about various subjects, not all of them directly related to the story. The title also gives the new generation of players much more of an opportunity to step out from under the shadow of the earlier cast, who played significant roles in GO but sit in the background most of the time here.

As with previous entries, there are two types of battle: small five-a-side games and full eleven-versus-eleven matches. The victory condition of the five-a-side battle has been simplified so it is always to score first rather than a small set of possible conditions, which is not a bad thing as these were always the most engaging ones. The game features some new aspects to its full story matches, notably that of an Advance Gauge, which replaces the specific tasks required to progress in-match events in the previous title. Here players are required to fill a meter that goes up with positive actions from the player’s team, such a dribbling, passing, shooting, and, for maximum effect, scoring. Players will have until the end of the current half to fill the gauge, and failure results in an immediate game over. It should be noted that this will often not be the only requirement to progress, as most matches also require that the player’s team actually win the match after all is said and done. Saving can take place anywhere, and game overs only occur in story matches and battles; those lost against standard opponents will simply let the player carry on as before.

Difficulty has always been on the easy side throughout the entire series, but Chrono Stones does the best job so far of making things challenging. Players will have to be more aggressive in their use of skills, summons, etc. However, it can be a bit frustrating early on due to a mixture of the starting filler players being pretty poor and the limited opportunities to recruit new players in the initial areas. Many of those that seem available at the beginning are really not, as the requirements — which feature a combination of recruiting other players, finding spots of interest, and talking to particular NPCs — are often impossible until much later in the game. A few are randomly available to join after a battle, but these are not very common and there’s no real indication to the likelihood of them joining. That said, after more places and players become unlocked, the recruiting system becomes a lot more engaging; it would have just been nice to have more options early on. 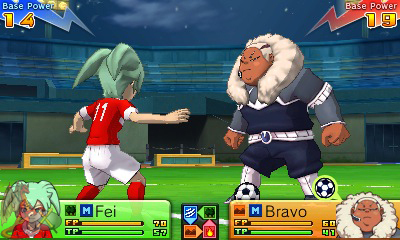 Most of the various little additions to Inazuma‘s version of football from previous games in the series remain, such as team skills and Fighting Spirits, though the gimmicky pitches and stadiums from GO are thankfully left out. That isn’t to say Chrono Stones doesn’t bring its own things, though. Miximaxing is one new flavour here, which allows players to merge with the spirits of other figures (or even other players), gaining access to extra skills as well as providing significant boosts. Another new option is Armourfying a summoned Fighting Spirit. This provides a significant extra boost to the player’s Fighting Spirit bonuses, though the window of effect is not long. All of these options serve to make the game more tactical than before, making players choose wisely when and who they want to have summon their Fighting Spirits and when the best time to Armourfy is.

The soundtrack, composed once more by Yasunori Mitsuda and Natsumi Kameoka, is the strongest yet in the series, providing a host of catchy tunes. Voice acting keeps that Saturday morning cartoon feel, with its globe-spanning range of accents — despite things being obstinately set in Japan — being highly variable in quality and not adding all that much to the game. Visuals retain the impressive upgrade seen in the last title, which saw the true leap of the series from DS to 3DS, giving players another vibrant treat.

By bringing in a new cast with Inazuma Eleven GO, Level-5 gave the series a much needed freshness, with Chrono Stones carrying on well despite its slow start. All the charm is present in abundance once more in Chrono Stones, and the time-travel hijinks give a lot of room for entertainment while letting the new characters step out further from the shadows of their predecessors. Where on Earth the series goes from here will be interesting to see.