It’s Football Jim, But Not As We Know It

The second game in Level-5’s Inazuma Eleven series goes even further with the parallels to the Pokémon games than its predecessor by coming in two versions: Inazuma Eleven 2 Firestorm and Inazuma Eleven 2 Blizzard. Retaining both the first game’s obvious appeal for younger gamers and strong gameplay that will interest players of all ages, Inazuma Eleven 2 might not add much gameplay-wise to the series. However, it is still an enjoyable experience that shows RPGs and sports can make a very worthwhile mix.

The one area where Inazuma Eleven 2 certainly outdoes its predecessor is the pure craziness of its premise and story. While the first game used the relatively sane basic premise of an annual football tournament, even if the goings on in that tournament were bonkers to say the least, the second throws that out the window and introduces aliens using football to destroy the nations’ schools. It has to be said that the premise itself is very entertaining, and both the returning and new characters carry over the high level of charm from the first game. While the story certainly doesn’t require that the first game has been played through, it can mean that those unfamiliar with the characters are puzzled by some of their interactions and references to the Raimon football teams’ history. The kid-friendly level of writing does show itself a few times, with upcoming plot twists outright paraded rather than just hinted at and a general level of cheese that can get tiresome by the end.

Football games themselves are split into two types. The standard eleven-per-side matches make up primary story events, while four-on-four battles occur randomly whilst exploring and recruiting new players. The battles have specific aims, such as scoring the first goal or gaining possession of the ball within a time limit, while standard matches have the obvious target of scoring more goals than the opposition. Losing battles and matches is a minor concern, with the only cost being a trivial amount of the game’s currency, and even that is avoidable because of the ability to save anywhere. Matches are controlled from a top-down perspective exclusively through the touchscreen, dragging players to tell them where to run and tapping to kick the ball into that space. When shooting or coming into contact with another player, a basic instruction can be given (e.g. regular tackle or a slide tackle) or the player can consume some of their TP to use one of the ridiculously over-the-top skills that will usually guarantee a success. 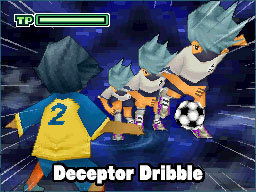 One of the more mundane skills in the game.

While the match system is very much more of the same from the first game, there are some minor improvements. In the full matches, there is now a simpler option to shoot by pressing an icon on the touchscreen rather than having to tap on the goal, and some skill shots are identified as long-range and can be used from a decent distance away. Shots on goal also receive more potential involvement from defenders, who can now help out their keepers by using skills to block shots if they can get in the way. Inazuma Eleven 2 does its bit for gender equality too by allowing female players to take the field, starting with the Prime Minister’s daughter, although the stereotypes in the all-female team later on may undo some of the ostensible gains in sexual relations. Outside of matches, gameplay is a basic RPG exploration experience, plenty of random NPCs, equipment, and skill shops. The game is more than willing to state exactly where to go in order to advance the plot at all times.

Taking inspiration from Pokémon, each version has a number of players exclusive to it, plus an exclusive team for Raimon to play against. It’s very odd, however, that this exclusive team is only available to play against after the story has been completed, especially considering the semi-regular appearance of its captain and the numerous opportunities within the plot for it to become involved. Players can be recruited in a number of different ways, including scouting those that have previously been seen in random battles, a Connection Map that unlocks more players as it’s advanced through, and recruiting those from other teams previously defeated in full matches earlier in the game. The sheer number of possible players to choose from is truly staggering, with the total number up over 1,500. It’s rather amusing that Inazuma Eleven 2 has eliminated any possibility of mistaking the game’s location for somewhere other than Japan, which makes the English names of all the characters stand out quite a bit. However, considering the premise of football-playing alien invaders and skills that include summoning a stone wall to block opponents, geographically incorrect names are hardly the most pressing of realism-based concerns. 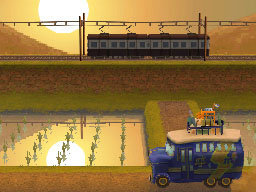 The Inazumabus is coming, and everybody’s jumping.

The biggest issue with the first Inazuma Eleven game was that it was all too easy to start winning every match by five or six goals once players got the hang of the battle system, coupled with a lack of harder difficulty levels. Unfortunately the same problem applies here, and while there are some story matches or tasks (a five-goal win is required for an S-rank on the optional matches) that can provide a challenge, it does take some of the shine off. It’s pretty easy to complete the story in around twenty hours, although there is plenty of side content for players to partake in, such as friendlies against previous opponents in both games and a number of additional post-story teams to challenge. There are a number of multiplayer options as well, including trading players between games and matches that can be played with up to three friends. The game will even allow those who just own the original Inazuma Eleven game to join in, although this will disable the new match features.

Yasunori Mitsuda’s soundtrack is pleasantly catchy, providing a good match for the Saturday-morning cartoon theme of the game. The voice acting, however, doesn’t really add too much, mostly due to the combination of relative rareness and cheesy writing. Visually the game is decent enough, with the special moves and other interesting match events very well animated using 3D models, although the basic sprite level for the match overview and exploration is a bit underwhelming in comparison. The second game contains more fully animated cutscenes than than its predecessor, which generally do a nice job of giving life to some of the more dramatic scenes and reveals in the story.

Inazuma Eleven 2 definitely stays true to the simple charm created by the first game, providing what is very much more of the same. An engaging premise sets the early theme of simple but enjoyable fun, which the gameplay is more than happy to uphold. Those looking for a challenging experience won’t find that here, but there’s plenty of enjoyment to be had by those prepared to sit back and enjoy the wacky adventures of the Raimon team.