Only a Fool Bets Against a Viking

Many definitions of “game” focus on rules. To be recognizable as a game, an activity needs rules to define a contest or justify a set of actions. Hand of Fate by Defiant Development uses a card game of life and death between a nameless warrior and the wizened Dealer to comment on the similarity between life and games, as well as the rules that control them both. The conversation takes place over a spread of cards, which the player navigates a turn at a time. The cards are drawn from the character’s life — events that have taken on metaphoric importance much like a personal tarot. The Dealer adds his own cards to the mix to create unexpected scenarios. Like an adversarial dungeon master, the Dealer delights in the player’s setbacks but sticks to the rules. After all, without rules there would be no measure for comparing victory and defeat. Working within the game’s logic to create better odds for success is a satisfying adventure that tests the player’s reflexes and deck-building acumen.

Hand of Fate consists of three main sections: deck building, navigating encounters, and battle. Deck building is a popular mechanic in tabletop games, but the act of building the deck is rarely part of the narrative. Here, the hero literally filters through past memories and decides which ones are likely to aid in the forthcoming challenges. Although it would have been interesting to further explore the epistemological effect of a hero who rearranges his memories to optimize his present, the concept primarily serves as a level-up mechanic. The player unlocks new cards through play and uses them to stock an equipment deck and an encounter deck. The Dealer shuffles his own special blend of cards into each deck at the start of each themed scenario and the journey begins. 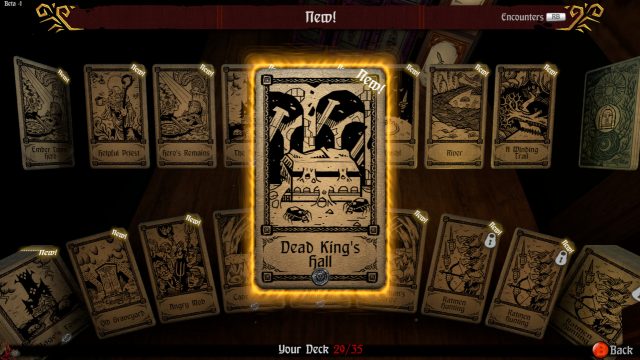 Let’s add this card to the deck. What could go wrong?

Each scenario consists of exploring a map made out of facedown cards from the encounter deck. Moving onto a card flips it over and displays its story. For example, the hero must decide what to do with an unattended treasure chest or whether to help a feckless bard and the guildmaster’s daughter elope. Some encounter cards offer the player a moral (or to be more honest, a cost/benefit analysis) scenario. Other encounters are driven by a four-card monte mechanic: keep your eye on the moving card to determine whether the buried treasure contains a handful of coins, a rare fragment of a map leading to a new quest, or a debilitating curse. Other cards are less complicated, and simply provide a piece of equipment, a blessing, a curse, supplies, or damage drawn from the appropriate deck. Completing the challenges on many cards earns the player a token, which can be traded in for new cards. Encounters rarely lack the threat of violence, which leads to combat.

Combat is fast and visceral action-RPG fare, but only gets to show off its full range during boss battles. Most standard enemies’ attacks can be countered with the shield or dodged with a quick roll. Early scuffles can be mashed through, while later battles depend strongly on deck composition and which enemies are drawn for each encounter. Consecutive attacks build combo chains, which increase damage and add gratifying slow motion effects to the brutal strikes. As routine as the battles against rank-and-file bandits and ratmen can get, landing a powerful hammer blow at the end of a lengthy combo carries a palpable weight that’s worth experiencing. Magical weapons add to the fun with special attacks. Special attacks are charged by swinging the weapon, so a suitably nimble hero can alternate between rolling around the battlefield and swinging at the air to build up special attacks. It isn’t dignified, and isn’t especially helpful against swarms, but being without a shield can force strange tactics. Carrying a shield doesn’t just provide the ability to counterattack; it shows an icon that predicts enemy attacks, suggesting the best time to dodge or back off. Finally, the hero can also carry a single artifact into battle for a helpful ability like throwing daggers, healing damage, or freezing nearby enemies. It’s a solid system, but success rarely requires switching up tactics to find a different path to victory.

Outside of combat, the hero’s interactions with the Dealer carry the story’s emotional weight. Encounters with characters on the encounter cards are perfunctory and archetypal; the Dealer is a different story. The sarcastic, world-weary administrator of the card game goads the player to keep playing while viciously cutting any chance at triumph. It’s rare to find an antagonist so dedicated to taunting the player who doesn’t cross the line into annoying, but the Dealer is one. Anthony Skordi’s Shakespearean-trained tones go a long way in establishing the Dealer, and the abundance of lines he receives carry it the rest of the way. The Dealer’s insulting wisdom contains enough enticing scraps of characterization and lore about the game that the occasional repeated line are forgiven. The soundtrack emphasizes the moods of the game’s architect: sinister, but with moments of brightly plucked strings, triumphant horns, and wild gongs. 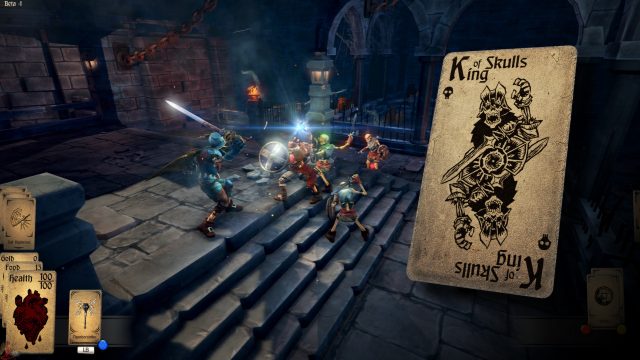 He’s not my king! I didn’t vote for him!

In card-based games, it’s worth taking a special look at luck. Luck of the draw influences the deck-based mechanics, but the game never feels helplessly random. Since the player has control over building most of the encounter and equipment decks, there’s a lot of control over the types of danger and assistance each scenario will contain. Players who have a quick eye and a head for four-card monte have an extra measure of control. Moreover, even an unlucky run can be the opportunity the player needs to focus on fulfilling the requirements to earn one of the deck’s more onerous tokens. It may not be worth donating 30 units of food to a band of orphans in a run focused on beating the boss, but if failure is practically guaranteed there are worse ways to go than earning new cards. An unlucky draw can ruin an otherwise promising run, but there are ways to mitigate bad luck, and snark from the Dealer is the only penalty for an untimely death.

Hand of Fate is a rollicking good time that can be completed in under 20 hours. Unlocking all of the cards and exploring the class options introduced in the $4.99 Wildcards DLC extends the playability. With luck, these additional quests and items will last until the sequel is released. In addition to increased production values, Hand of Fate 2 already looks to expand upon the original’s pleasant-but-routine combat and hazy setting. This isn’t to say Hand of Fate isn’t worth playing since the new model is on the way — rather, it’s a game that leaves the player wanting more of a good thing.