Ghost of a Tale Review

Of Mice and Minstrels

First-time developer SeithCG’s Ghost of a Tale rides a fine line of what constitutes an RPG. The first hour or two I spent with Tilo, the little minstrel on a quest to save his mousey wife from the clutches of the rat army known as the Red Paw, featured very few familiar gameplay elements one would expect to find in an RPG. Combat, for instance, is entirely absent. However, digging into the game further reveals some genre staples, like quests and a leveling system, as well as the large amount of care the developer invested into establishing a unique and interesting new world to explore, with some impressive production values and writing along the way. Even though it’s not your run-of-the-mill RPG by any stretch of the imagination, there’s a good bit of potential tucked away in the adventure of this little four-legged minstrel.

Belying its adorable animal-kingdom theme and setting, Ghost of a Tale looks to FromSoftware’s Souls series in the way it presents its narrative, which is to say that a very large chunk of it is tucked away in item descriptions and codex entries accessible during dialog. The difference is that, while Souls-like games can still be enjoyed based purely on their action combat merits, Ghost of a Tale doesn’t offer a lot of excitement in its gameplay. Tilo has no recourse against the rat army he’s up against — they not only tower over him in stature, but are often clad in armor and bearing weapons. Tilo, on the other hand, is unable to wield anything more deadly than a bottle with which he can at best temporarily knock out a guard, provided his foe’s not wearing a metal helmet. Even the game’s final boss battle only sees Tilo lug around objects to solve a task while other allies are doing the actual fighting. 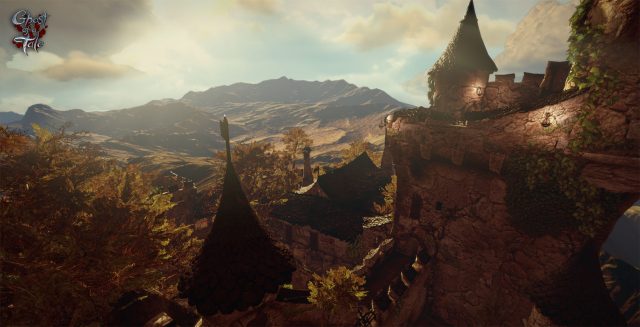 Dwindling Heights Keep is a sprawling place, and Tilo will run from end to end multiple times.

Tilo is instead reduced to sneaking past guards and hiding in empty chests or cupboards once they’re onto him. This mechanic is especially cumbersome in the game’s early sections, when the player is still finding their bearings. As the game begins, Tilo is locked in a prison cell, in the dungeon underneath the rat stronghold of Dwindling Heights Keep. The why or how of Tilo’s imprisonment can only be found by carefully inspecting his inventory. Though Tilo can run as well as sneak, rats — even sleeping ones — will hear him and give chase, no matter how slowly he moves, forcing the player to stop moving entirely to lower their alertness level again. Thus, Tilo’s escape from the dungeon and the next few sections represent some of the game’s most challenging hours, when the player is the most disoriented, trying to get a handle on the world and come to terms with the narrative — a bumpy start that is difficult to claw back from.

For those that persevere through this early hump, a more engaging experience awaits. Once Tilo has assembled a set of armor that lets him pass as a runty rat guard, the need for stealth is effectively negated for much of the remainder of the game. An emphasis is placed on Tilo assembling a number of such outfits by finding pieces of them scattered around; they make up a number of the game’s quests and allow Tilo certain benefits by passing himself off as various personalities. A king’s outfit grants him a royal audience with a magpie, while the pirate’s costume allows him to appear as the dread pirate captain Otto Powderkeg. While some outfits are part of optional side quests and aren’t required to complete the game, it is possible to run into a roadblock due to having missed a single piece of a critical costume, hidden in a chest somewhere in the game’s rather large world. 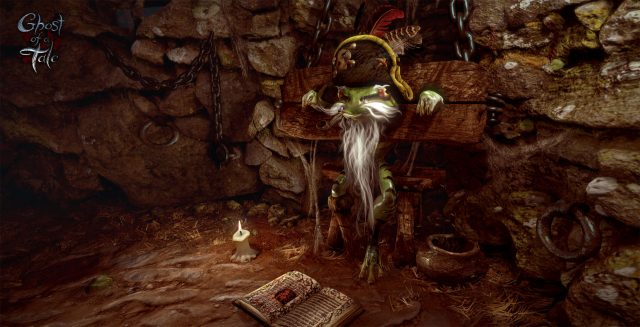 The pirate frog Kerold Redwhiskers is just one of a number of colorful NPCs Tilo will meet on his adventure.

This world becomes accessible piece by piece, starting with the dungeon before expanding to the keep’s courtyard and main buildings. Eventually, Tilo is able to descend into the keep’s sewer system, the cavernous catacombs below the ruins, and even to the nearby shore of Lake Vaelia. As the world expands geographically, a number of shortcuts are revealed to slightly ease the burden of the copious amounts of backtracking required. There is no fast-travel mechanic, and the absurd number of back-and-forth trips one has to take, sometimes from one end of the map to its complete opposite, really stretch out the short runtime of about twelve hours into something that feels much longer. The need to stay disguised in a suit of armor for large chunks compounds the issue, since the armor’s added weight slows Tilo’s walking speed and takes away his ability to dash forward on all fours.

Being a minstrel, Tilo’s chief talent lies in the performance of songs, and the game actually features a number of original compositions that Tilo must perform at certain moments, complete with lyrical text that actually matches the cadence of the music. Ballads about heroic deeds and great battles, and jaunty jigs to raise a tankard of rotgut to further prop up the game’s world-building. In fact, from beginning to end, the writing featured in Ghost of a Tale is of very high quality, including the often humorous dialogues taking place with the variety of NPCs Tilo encounters, from the pirate frog also imprisoned in the dungeon, to Silas, the rat soldier who appears to be an ally to Tilo. The game features a number of memorable characters who, much like the world, leave a lasting impact once the credits have rolled. Unfortunately, the game never gets the chance to deliver a satisfying end to Tilo’s search for Merra, since it ends on a cliffhanger, to be continued in a future second installment. 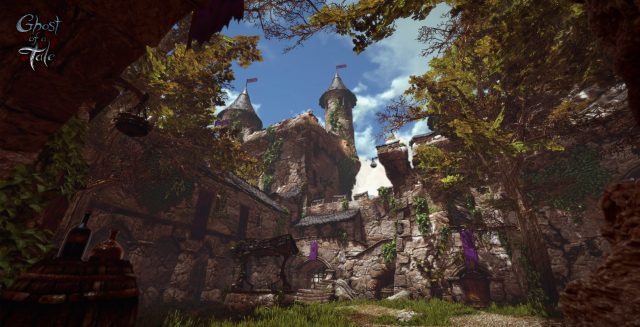 There’s a lot of eye candy to appreciate along the way. Tilo and the rest of the cast look great, lavishly animated and with expressive character portraits that lend a lot of personality during dialog. The same level of visual quality is evident in the rest of the world, with beautiful environments to see and hear — the only thing missing, really, is voice acting, as all dialog is handled via text instead. The world even features a day-night cycle, though this feature feels shoehorned in. While it offers some breathtaking visuals while watching spears of light filter through foliage as night gives way to day, it only serves to annoy the player as it’s just a reason for NPCs to appear and disappear from their locations depending on what time it is. The player is then forced to either slog across the map to continue with a quest line or seek out a bed and sleep to fast-forward time.

Ghost of a Tale is and does a lot of things, some impressive but not all of them great triumphs. The game’s stealth mechanic, before it’s traded in for a suit of armor at the cost of greatly-decreased movement speed, is hardly enjoyable, and many aspects of navigating the world are tedious and cumbersome. But the game does put its best foot forward with the world it constructs, especially for those willing to dig through all available lore, and how it presents this world both visually and by incorporating some lovely original music. There’s room for improvement for future chapters — Tilo’s quest is far from over — but what’s here is an impressive, if not flawless, first effort for a new, intriguing IP.