In this edition of the column, we take a look at otome visual novel Birushana: Rising Flower of Genpei on Nintendo Switch.

Otome games that take place in Japan’s historical past are numerous. Not only do they share important points in history, but they allow players to engage in swoon-worthy romances with versions of some of history’s most prominent figures. In Birushana: Rising Flower of Genpei, players are transported to fifteen years after the Heiji Rebellion in the 12th century CE, with the Heike Clan reaching its highest form of power while the Genji Clan is in disarray, devastated by defeat.

Players take on the role of the youngest member of the Genji Clan, Yoshitsune Minamoto. Yoshitsune harbors a secret — he is actually a she! Born Shanao, she is the youngest daughter of Yoshitomo Minamoto and was sent to Kurama Temple upon her father’s death. Upon living with the monks, Shanao was trained in military strategy and raised as a boy. Having no family left to speak of, Shanao desires a peaceful life, but needs to survive the war without having her true identity revealed.

Birushana has a fantastic overarching story. It does a great job of familiarizing players with the historical setting through its story, while also offering an in-game dictionary that provides even more in-depth information. However, the main goal of the game is of course to work through the five romantic storylines, each with its own true love and tragic endings. As the game progresses, more special endings can be unlocked, including routes for secondary characters. 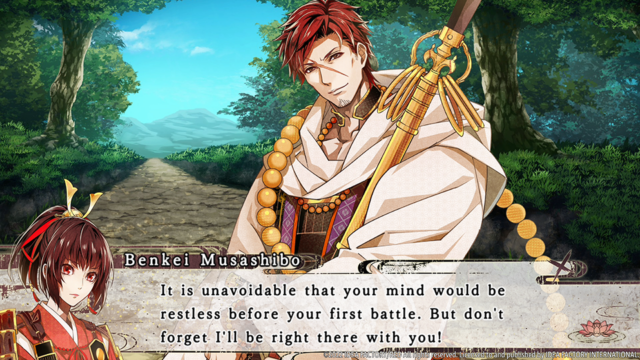 Benkei is the perfect himbo husbando.

There are three character routes available at the start: Noritsune, Benkei, and Shugen, with two more unlocked once the initial ones are completed. Once players select a route, they are offered choices throughout each chapter. Love Catches occur when the player selects the best choice for the love interest that they are pursuing, and this is shown in the form of a flower. Players can check their compatibility with each character through the Information screen, which gives a sense of their current bond with each love interest.

Birushana’s story does an amazing job of balancing the action and destruction that comes from war with quieter moments that help flesh out the cast of characters. Noritsune and Benkei’s routes are particular highlights. Noritsune is our heroine’s rival, and he is bursting with energy. The same age as Shanao, he feels a deep sense of competition, and his desire to win makes for some interesting misunderstandings. Benkei, on the other hand, is a former monk from Mount Hiei, who pledges to become Shanao’s loyal vassal after being defeated by her in combat. Benkei’s personality is compassionate, charming, and good-natured, meaning his route has many sweet and tender moments between the heroine and him.

The game has a fantastic supporting cast of characters who keep it colourful and engaging. Each of them bears their soul to the player across the routes. As for swoon-worthy romances, Birushana has something for everyone in terms of character tropes, from enemies to lovers, to even allowing the players to romance the main villain. It also helps that Shanao is an interesting heroine to follow throughout each story, as for once she isn’t an amnesiac protagonist. She has such a strong will and a desire to fight for what she feels is right, and she is so well fleshed-out that gaining any unique information regarding her past is all the more interesting. 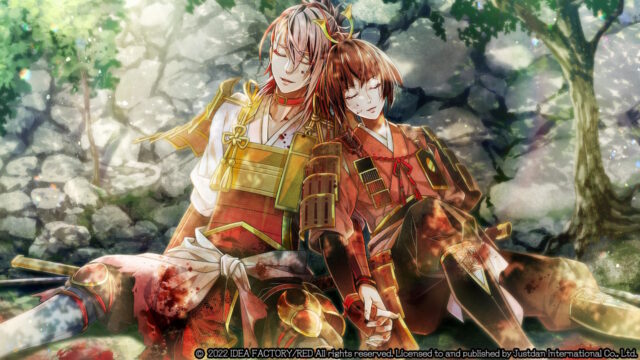 The game features Japanese voice acting for all characters, minus the silent heroine, and it’s all very good. Every actor does a great job of bringing their character to life. The game’s localization is fairly decent, minus the odd typo. The mistakes in the localization are not enough to detract from the enjoyment of the overall story and the cast of characters. The game also features a very immersive soundtrack that does a fantastic job of highlighting the setting.

Thirty hours is enough to complete all of the main romances and a few of the tragic endings. However, there is so much more content to explore with the special endings for the secondary cast, and none of the routes feel repetitive thanks to how interesting each character is. Birushana is absolutely worth recommending to otome fans, as all of the love interests are interesting and engaging, and the game does a great job of bringing history to life. It offers tons of content to explore, and so many boys to smooch.