A Throne is Only a Bench Covered in Polygons

“Most men would rather deny a hard truth than face it.” — Tyrion Lannister

Whether you’re a fan or not, HBO has made it clear that you should be watching Game of Thrones. With George R.R Martin “writing like the wind” it’s only a matter of time before fans continue to make their demands of the series in hopes that their favourite characters will survive. Regardless of one’s interest in the franchise, there’s no question that an RPG was the right form for a video game adaptation, but was it faithful to Martin’s world? That point is debatable, as Cyanide Studios’ vision is one of many questionable design choices.

In the world of Westeros, in the Realm of the Seven Kingdoms, a pair of warriors calling themselves the Double-Edged Blade once plied their trade. Mors Westford and Alester Sarwyck, two former soldiers of Robert Baratheon’s Rebellion, parted ways over a dark secret years before. Mors has lost everything he holds dear to a godless war, forcing him to take refuge in the Night’s Watch. Alester is a man atoning for his sins, to which end he joins the disciples of R’hllor in their holy rites. Their paths cross once more when a young woman turns both their worlds upside down, causing the Double-Edge Blade to take up arms once more against the evil Valarr, the current threat to the throne.

While the plot comes across as generic fantasy cliché, Game of Thrones has a surprisingly well written story that begs to be uncovered. Although the first few chapters start off slow, they build into a very elaborate tale that will get gamers to care about Mors’ and Alester’s mission. The decisions the player makes within Mors’ and Alester’s chapters do affect the overall story and change certain events depending on the selections made. Going one step further, the final chapters of the game offer unique and intense plot twists that will leave players genuinely surprised. Each of the game’s endings also offers diverse and astonishing prospects for our heroes. These endings are worth pursuing, as they are excellently displayed and show the diversity that exists within Martin’s world. 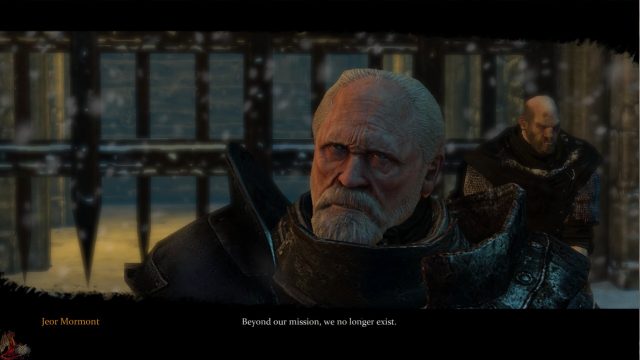 The Night’s Watch: A place where people go to be deprived.

The only downfall that exists in terms of the game’s story comes from its dialogue. Although the story is well told and the relationship to Martin’s world is spot on, the dialogue has its moments of corniness that disrupt the overall flow of the tale. Some of the dialogue options given feel disjointed in terms of how the characters would respond to situations, often leaving players to accept the choices they’ve made even if they don’t entirely make sense to the plot. In one situation, players have the option of feeding Cersei Lannister’s ego, or telling her she’s a cow. The “cow” comment gets the player an instant Game Over, even though it’s perfectly in character and in context for that chapter.

This is a minor gripe, as the voice acting in the game makes up for the cheesiness of the dialogue. The dialogue flows incredible well and creates believable performances even when the writing doesn’t entirely deliver. It helps that James Cosmo and Conleth Hill reprise their roles from the HBO series as Lord Commander Jeor Mormont and Lord Varys. These performances help add an extra layer of authenticity to the overarching plot and the game’s well-crafted world. While there isn’t a lot of music to speak of, the game sports the iconic theme song from the HBO series, and additional pieces definitely add to the atmosphere. In many areas there are no sounds to be heard except for the clashing of swords.

Unfortunately the graphics do not fare as well. When the game is not in motion or the scenes are portraying heated discussion, the graphics are decent, though the characters lack a variety of facial expressions and emotions. When traversing Westeros, however, graphical clipping is abundant as characters can walk through unopened doors, attacks go right through enemies, and characters can die without being touched by an opponent. Doors are the real villains in this game, as enemies, characters and objects will always clip through them. Considering that the game is nothing but bleak and boring corridors, it can be frustrating to fight the graphics as much as the enemy. It also doesn’t help that the world itself is painted with a dull palette, creating an uninspired environment to roam in. When the world is still, it can be very pleasant to look at, but the moment it’s motion it creates a very jarring experience.

While graphics and the audio leave much to be desired, Cyanide Studios did a decent job in creating a slow but engaging combat system. Both Mors and Alester can queue up to three commands, and while the combat is somewhat turn-based, it allows for these tactics to be changed on the fly as necessary. Also, by pressing down on the X button they can restore energy during combat, though the downside is that this leaves them fairly vulnerable. Equipment choice is important, as many strong attacks require specific weapon types in order to work.

During character creation players are asked to select strengths and weaknesses for both heroes, and this plays well into the combat system. Weaknesses will hinder Mors’ and Alester’s overall combat performance, while strengths will allow them to recover in situations with much more ease. For every strength chosen, the remaining pool of choices shrinks, until at last the player has a balanced set of strengths and weaknesses to deal with for the rest of the game. As Mors and Alester gain levels, players can allot points to their main class, specialty class, and their secondary skills that can be used outside of battles. 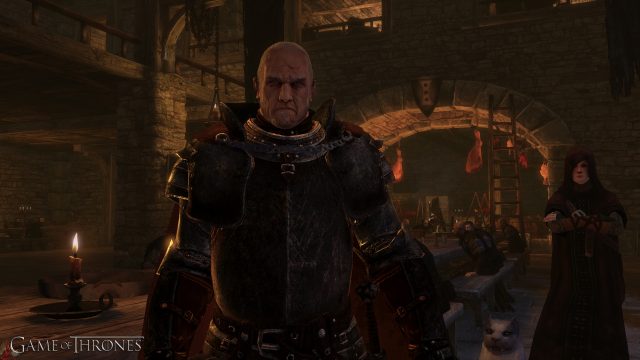 All work and no play makes Mors a dull boy.

For example, Mors can use his Skinwalker abilities to have his dog sniff out the scent of someone they may be tracking. When in Skinwalker mode the game switches to a first-person perspective, and also allows Mors’ dog to mark areas of interest, and get the jump on potential enemies with a sneak attack. Skinwalker mode is certainly a unique idea, but the frequent gimmick of it is overdone in Mors’ chapters, making it less intriguing as the game goes on. Alester, on the other hand, can summon the power of R’hllor to help locate hidden objects and items, which adds an interesting touch for puzzle solving, but the skill itself is under-valued and one note.

One aspect that is unforgivable in Game of Thrones is its poor inventory interface. More often than not players will be lugging around tons of junk with them without any easy way of comparing equipment stats. Moreover, the game’s weapons do not specify which class they are compatible with, the game assumes players will remember this information from character creation. Figuring out the right items from trial and error is a chore, creating frustration for those who simply want to change their weapons on the fly.

Game of Thrones is not a long game. It can be completed in less than twenty hours. However, there’s an ample amount of side content to uncover that can easily push it over that mark. Although Game of Thrones offers an adjustable difficultly, it feels completely randomized regardless of setting. Repeated battles with the exact same combatants may vary considerably in challenge for no apparent reason at all. The game’s auto-saving is also not very frequent, so manual saving is a must.

Game of Thrones is a title I have trouble staying mad at. For all its flaws, it did genuinely surprise me in areas and had twists and turns that were unexpected. It’s a pleasantly mediocre game that could have used tons more polish to create a better experience. While I cannot recommend the game at full price, it’s certainly one worth investigating as a rental or if obtained on the cheap. It’s hard to deny the game’s faults, but there’s definitely some intrigue for those who are already fans of the franchise. Newcomers to the world of Westeros may need to pass this one by.