Summon Me a Better Game

Where does this all begin? Well, the story is about a young girl named Arche who moves to the town of Tonkiness with her parents and enrolls in the local magic school. However, Arche soon finds out that in order to perform magic she needs the power of an elemental stone. That’s about as interesting as the story gets, as the plot turns into inane chatter about candy and being best friends. Players watch Arche’s friendships with her classmates develop over time, but these relationships are rather shallow and difficult to care about. Overall, there’s very little story to speak of, which makes the frustrating gameplay even less appealing.

Fortune Summoners is a deceptive game. At a first glance it seems like a fun romp through childhood, but in reality it is an experience defined by poor ideas and execution that come together to form a repetitive nightmare. A side-scrolling action-RPG is a great idea, but it needs to control flawlessly for it to feel like a solid experience. Sadly, the controls are the biggest mark against Fortune Summoners. Having played the game with both the keyboard and controller, there is no difference in how stiffly the game played. Part of the problem is that while the game’s combat was theoretically designed for strategic and methodical gameplay, it seems to frequently require fast-paced maneuvers, and the controls are extremely non-responsive. Trying to get Arche to turn on a dime without getting hit is next to impossible due to the few seconds of delay. It also doesn’t help that Arche’s timed combos are essential to her success in combat, but they only seem to work when they feel like it. Controlling secondary characters such as Sana and Stella also proves problematic as their spells take too long to cast and the hit detection of their weapons is exceptionally poor, causing them to frequently be slaughtered by the enemy. There are countless frustrating situations in which the enemies appear to be hit, but the game does not register the action.

The fun with the controls doesn’t end there, as platforming also has its own share of problems. Platforming challenges require the kind of precision that the controls in Fortune Summoners don’t provide. There’s nothing worse than feeling like a jump has been perfectly timed only to fall right off the edge, take damage and be forced to start all over again. This tedium is constant even outside of the game’s combat and platforming, as dungeons are mind-numbing experiences that offer little to no reward throughout. The dungeons are dreadfully designed and it doesn’t help when the game decides that forced repetition through an area is a brilliant idea. The dungeons are bare-bones and are mostly filled with swarms of enemies that beat down on poor Arche and her friends to the point where death even becomes its own repetitious theme. What this game could have benefitted from was a map of any kind, but that seems to go against the core design of Fortune Summoners entirely.

Which leads to the next problem: difficulty. Fortune Summoners offers three difficulty levels on startup, but it’s hard to tell the difference between them when the game’s overall difficulty is extremely uneven. Regular enemies tend to be more difficult than a lot of the bosses because they come in droves, regenerate quickly, and take forever to kill. Couple these tedious fights with the forced repetition of dungeons, and it feels like they were never killed in the first place. Players are likely to spend most of the game without a full party, as the girls have a tendency to be devoured quickly as soon as there is more than one enemy on screen. The worst example of this is a section of the game in which players take on the role of Stella, a fire mage, entirely on her own. Her spells take seconds too long to charge, placing her at a huge disadvantage. These sections are vicious and unfair. Challenging games are great when they reward the player for their efforts, but Fortune Summoners‘ repayment is more poorly designed dungeons and neverending cutscenes filled with trite dialogue. 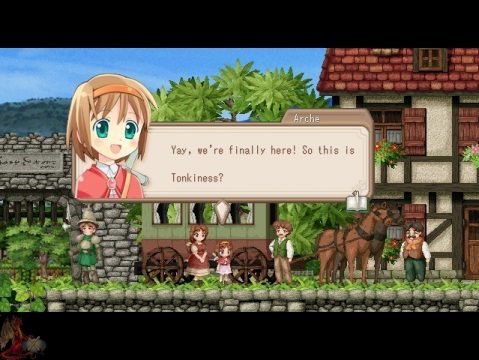 Tonkiness is a pretty awesome name for a town.

As much as the story never feels like it goes anywhere, credit must be given to Carpe Fulgur’s great localization. The dialogue feels fluid and well executed, but even their talents cannot save a story that goes nowhere. No matter how cute Arche, Sana and Stella are, there’s no reason to care about their friendship when the game already feels like a chore to play. It also doesn’t help that there’s so much guesswork involved in finding the right NPCs to move the plot along, and more time feels completely wasted between the time spent on the “story” and the dungeons.

Speaking of wasted space, Fortune Summoners has one of the most annoying and uninspired soundtracks to ever grace an RPG. It gets to the point where hearing the same few songs being looped endlessly compounds with the rest of the game’s flaws and begins to drive one batty. The voice acting is less of an offender, as the only grating aspect is listening to the death cries of the heroines as they’re being annihilated repeatedly by flocks of baddies. In terms of visuals, Fortune Summoners can be quite lovely to look at in places. There’s a lot of attention to detail in terms of how towns look, but the same cannot be said for the dungeons and open areas, which are bland. The sprites look great, and the colours are crisp and vibrant. The game may look nice, but other than the visuals and the localization Fortune Summoners provides nothing to offer at the $20 price tag except thirty hours of misery.

No matter how hard I tried, Fortune Summoners and I just couldn’t keep our friendship going. It was false from the start and I felt that I couldn’t bear to hang out with a game that treated me like my time wasn’t valuable. At the end of the day, it was easier to go our separate ways and let her continue on her path of brutality. I refuse to praise a game that has no regard for proper game design, and reject the possibilities that Fortune Summoners and I could ever find a happy medium in terms of what we want from our gaming experiences. After wasting thirty hours of my time, this is one game that has no right to pass kindergarten.