Staying in the Shadows

Fire Emblem: Shadow Dragon is just the game I’d been waiting for since I finished Fire Emblem: The Sacred Stones on the Game Boy Advance. While I hold nothing against the GameCube and Wii Fire Emblem titles, I find the series is much easier to play on a handheld system. So I’d been biding my time waiting for a DS Fire Emblem and now I have one, but two questions still hang in the air. Does it hold up to what fans expect of a Fire Emblem title, and is it a fun tactical RPG?

Well, as soon as you get your hands on Shadow Dragon, it’s easy to tell that it contains the typical Fire Emblem battle system. Fire Emblem‘s no frills combat system makes it easy to pick up and play, and Shadow Dragon varies little from what a fan would expect of the series. It’s the standard system of keeping flying units away from archers, knights away from mages, and lords away from anything that could kill them. Characters level up by participating in battle and once most units reach level twenty, a Master Seal can be used to promote that character to an advanced class. The classes are fairly vanilla, as Thieves can’t steal and there are no additional skills available to modify your characters. A few classes, such as the Lord and Thief cannot be promoted, so these will continue on from level twenty instead of upgrading. Survival in Fire Emblem is mainly about range with a touch of chance. As long as you keep your units safely away from the opposing crowd, things should go well. If you wander into range of too many enemies, your units will be gone forever.

It is in the areas of range and character survival that Shadow Dragon really changes things up. No longer do you have to make educated guesses as to where your characters will be safe and where they will be slaughtered, as there is a handy enemy range indicator that can be turned on. With a simple button press, the enemies’ range is now visible at all times, so movement is no longer like walking into a mine field. Another addition that relieves the pressure of combat is reclassing. Fire Emblem: Shadow Dragon not only gives you a ton of playable characters, but also gives the option to change the class of most any unit. If you do accidentally lose a healer or favorite archer, now instead of instantly resetting, you have the option of shifting another expendable character into the dead unit’s place before the next battle. There are restrictions to this, as only a limited number of each unit type can be included and certain classes are unique to specific characters, but there should be more than enough to go around. 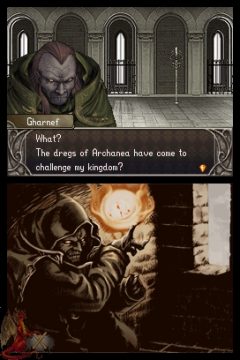 While both of these options help make Fire Emblem: Shadow Dragon more accessible, they also make the game much easier. When you combine these new features with mid-battle saves, it wouldn’t be too much of a stretch to say that Shadow Dragon on normal mode is likely the easiest title in the series to hit North America. Shadow Dragon gives another twist to the series by having optional Gaiden chapters accessible only by killing off your party. These hidden, optional battles are accessed by only having fifteen or fewer characters in the party. Considering that you will easily have more than twenty characters by the time the first of these comes along, this means that you will have to start actively killing party members in order to access them. Anyone who plays through the game in the traditional series manner of leaving no character dead would never even know these chapters existed, but wouldn’t miss out on anything vital as they only tend to net you a new party member and a powerful item. With the massive amount of playable characters received and the lessened focus on keeping everyone alive, Fire Emblem: Shadow Dragon deviates from the normal FE mindset.

The story does seem to follow the standard formula of the series, as it features a tale of good versus evil. Shadow Dragon‘s plot is even more basic than most, as it is a remake of the series’ first entry and faithfully follows the story of that title. Prince Marth, familiar to those who have played Smash Bros., is the game’s protagonist and you get to follow his quest to take back the kingdom of Altea from the evil that has spread across the land. During his adventure, he meets up with others who wish to join him in his cause and together they fight for the salvation of the land. The story is very straightforward and offers very few surprises throughout, making the barebones plot into a secondary aspect of the game, behind the battle system. 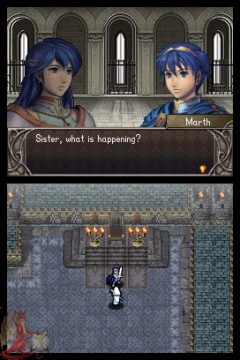 It’s hard to tell with such small sprites.

Fire Emblem: Shadow Dragon features visuals and sound that are improved over its Game Boy Advance brethren, but are still not what you would call cutting edge, even on the DS. The visuals are very low key with basic and unimpressive animations. Other than character art headshots, the battle sprites are indistinguishable except for class type and gender. Only a few characters are unique enough to be identifiable outside of the headshot. Combined with the reclassing option, the identify of characters is quickly lost. Thankfully, all movements and animations are very fast, so while the visuals don’t stand out, at least they function very well. The soundtrack is also quite limited, offering the same few pieces over and over throughout the game. The sound effects are all fairly standard, featuring nothing outstanding and not offering any voice acting. While neither area is particularly flawed, both are very straightforward and uninspired.

Like a handful of other titles out there, Fire Emblem now offers Wi-Fi options. The useful features are the online shop and character rental system, but the multiplayer combat is flawed much like other games that have attempted it. The big problem is its matchmaking process. If you just want to battle it out against a friend and have made plans ahead of time, then the experience can be somewhat enjoyable, but doing battle against random players is a pain. The selection pool is limited to people searching at the same time you are and since that’s not likely to be a ton of people, the system is hardly picky in who it chooses to match you up against. There is no balance, so you have to cross your fingers and hope for an opponent at the same level as you or the battle will be very one-sided. While it’s nice to have this option, it’s hardly something to complain about since it is completely optional. It would be nice to have a method for balancing gameplay so that the winner is the more skilled player, and not the one with characters at a higher level.

Shadow Dragon is a very unique Fire Emblem title in that it feels like a typical game in the series, but at the same time breaks many traditions. It’s much easier than other games in the series, but that could likely be due to the fact that the fear of death is abated thanks to reclassing and the tons of available recruits. The story and presentation are very humdrum, but the gameplay is still as solid and addictive as ever. It makes a solid entry game into the Fire Emblem world for anyone who’s been scared off by the hardcore reputation of the series. The only issue is that the game feels more like a regression for hardcore fans. Even though the game is clearly a remake, it’s still a new game and does very little to move the series forward. Shadow Dragon feels more like a nostalgic offering than one meant to progress the series, and as a remake it does this job well. It may seem like I’m being hard on the game, but it just doesn’t seem to do enough to outshine some of the more progressive tactical RPGs now available on the DS, or even live up to the advances made by the most recent entries in the series. While Fire Emblem: Shadow Dragon is every bit as addictive as its predecessors, it’s just not as impressive.