To Be or Not to Be, That Is the Question

Fire Emblem was released in 1990 for the Famicom, the Japanese name for the original Nintendo Entertainment System. Why it was not released in English is not difficult to discern: tactical games were an unknown quantity on consoles and Nintendo had greatly overestimated the demand for the first Dragon Warrior games in English. In 1993, Fire Emblem: Monshou no Nazo (Mystery of the Emblem), released on the Super Famicom, was half a remake of the original game and half a new story set in the same universe. It sported numerous interface improvements over the original, yet was passed over for English localization. Possibly because Marth’s inclusion in Super Smash Brothers Melee energized an entirely new fan base, Intelligent Systems in 2008 went back to the original version of the game and remade it as Fire Emblem: Shadow Dragon. The RPG market outside of Japan had changed enormously since this story was last used, and Nintendo deigned at last to translate the story of Marth for English-speaking audiences. Though Intelligent Systems’ major change to the established concepts of the series is quite jarring, Fire Emblem: Shadow Dragon is an excellent choice for Fire Emblem devotees and those who enjoy tactical RPGs.

The core story of Fire Emblem: Shadow Dragon dates from 1990, and what was innovative for a tactical title then is unimpressive now despite a fine localization from Nintendo. Prince Marth is booted out of his kingdom of Altea when imperial forces conquer all of the Archanean continent. About five years later, Princess Caeda of Talys, the land where Marth has been in exile, requests Marth aid the expulsion of bandits from her nation. This proves to be the impetus for Marth to begin his mission of freeing his home and the Archanean continent as a whole from the many corrupted nations holding it down. The story of Marth’s exile is now told in four prologue chapters, and the story has considerably more dialogue now, but there are no real twists to enliven a rather basic plot.

The heart of Fire Emblem: Shadow Dragon lies in its tactical combat. The player’s characters move around a battlefield of square tiles and engage the opposition in a fashion that will be familiar to tactical RPG veterans. In its earlier incarnations Marth’s story did not feature the weapons triangle, but this has been instituted now. Characters gain experience through their individual combat, every 100 experience points results in a level-up with chances of statistic increases, and characters can be promoted to more powerful classes after reaching level ten. 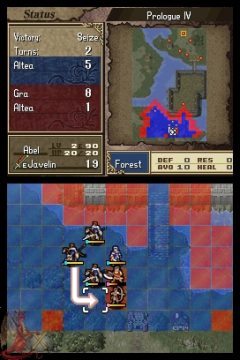 Honestly, would anyone want Gra, the only word spoken by a movie monster, to win?

One new feature that speeds up battles greatly is the ability to, with a press of the X button, call up every square on the battlefield that is in range of an enemy attack. All enemy attack ranges can be displayed, or any one. This helps enormously in making combat calculations by not forcing one to keep counting squares. When initiating an attack, the damage that will be done and the chance of either side landing a critical hit is displayed, allowing one to adjust a planned action with no guesswork necessary. Battles are also made speedy by the quick movement of units across the field and the swift combat animations. Both of these minimize the time spent waiting for things to finish without player input, and the combat animations can be turned off if desired.

A new feature to Shadow Dragon is the ability to change the class of almost every character prior to every battle. There are limits to this, but every character can switch to five or six different classes at the player’s discretion. In practice this class changing has two very significant obstacles: one being the fact that character statistic growths tend not to transfer to other classes well (this is very obvious if trying to make a magic user into a physical fighter or vice versa), and the other being the weapon experience system. Characters must use any given weapon type consistently in order to get better with it, and if switched to a class that uses weapons the character has never practiced with, only the weakest weapons in that class can be wielded. These are significant hindrances to the changing of character classes later in the game, but the system is still a useful one that makes characters far more versatile.

Far more jarring to Fire Emblem devotees is the means by which Gaiden chapters are unlocked. As in every Fire Emblem title, when a character’s Hit Points reach 0 that character is dead. Unlike any other game in the series, extra battlefields are now reached by killing characters off. There can be no more than 15 characters on the player’s force in order to see these Gaiden chapters, and reaching that number will require the wholesale slaughter of most people who join the roster. This goes against the standard series maxim of taking great care not to sacrifice soldiers, and is something most Fire Emblem veterans are unlikely to be at ease with.

The ability to sacrifice soldiers and complete the game without difficulty should be a signal of the challenge contained herein. By Fire Emblem standards, Shadow Dragon is not very hard. The battlefields contain one or two permanent save points that can be used in the middle of battle, meaning that the battle does not need to be reset if someone important dies. By the standards of all tactical RPGs Fire Emblem: Shadow Dragon is still moderately challenging, and although Marth has fairly good statistic growths his death does mean instant Game Over. 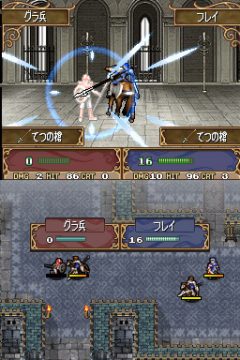 And the enemy soldier is assumed by the light into Grunt Heaven….

Inventory arrangement and use is good here, with characters being able to freely exchange items before battle and extra materials being sent automatically to a Convoy. Weapons have a set number of uses before they break, but there is now the ability to combine two used weapons into one. An interesting feature of battle preparation is the ability to forge one weapons, adding to their base statistics for a price. Exchanging items is rather time-consuming, though there is no obvious failing in the interface system that would have made this easier. The only archaic interaction issue is requiring Marth to seize the ground occupied by the boss of every chapter, even in new battlefields where the boss is only occupying a piece of dirt.

The visuals in Fire Emblem: Shadow Dragon are clear and distinct. The combat animations are nicely done and every character has a unique portrait. However, the quality here is not far above what the Game Boy Advance could have done. This is not meant as a detriment, for Fire Emblem games have never been overly concerned with astonishing visuals. It merely means the DS can produce better than what is seen here. It is also odd that the critical attacks of the Game Boy Advance games were more impressive than those here.

Some of the music is redone from Fire Emblem: Monshou no Nazo, and the nostalgic nod is appreciated. The majority is newly composed, and this is a very good thing considering how limited the number of tracks in Monshou no Nazo is. The music, new and old, is at the least pleasant and often insidiously catchy, limited only by the DS’s sound capabilities. Sound effects are good without being great enough to attract special mention.

Shadow Dragon will last 20-30 hours depending upon how it is played. The unique and unorthodox method for unlocking the Gaiden chapters guarantees replay for this reason alone, but the lure of trying the game on Hard mode is also an incentive. Trying the game with different characters and strategies also provides ample reason to play it again.

Fire Emblem: Shadow Dragon could be played by someone new to the series quite easily thanks to its many refinements and the tutorial contained within the Prologue chapters. Veterans of the series will find a game that combines the refinements of more recent entries, save for a lack of variety in battle objectives. The new features to the game are welcome, save for the requirement of killing characters to see everything, which never felt right even as I did it constantly. This component can be ignored, and a quality Fire Emblem title that rewards lovers of tactical RPGs is the result.