If you’ve played Final Fantasy XIII, you have an opinion of it. And no matter what that opinion may be, there are thousands of people who vehemently disagree with you, to the point where it facilitates the kind of frothing, incoherent fanboy rage that our particular subculture is so well-versed in. Final Fantasy XIII-2 is a very blatant attempt by Square Enix to appease the more vocal opponents of the original title, and in many ways it succeeds in fixing some of XIII‘s larger issues. Unfortunately, XIII-2 brings with it a handful of new issues, and the result is a more well-rounded, but less impressive game.

Final Fantasy XIII-2 picks up three years after the events of its predecessor, where Lightning’s sister, Serah, is living in the recently established town of New Bodhum on the surface of Gran Pulse. For players not familiar with the events of Final Fantasy XIII, the game offers up a narrated summary to get them up to speed. Serah is going through a bit of a mental crisis — when the fal’Cie Orphan was defeated and Cocoon almost fell, she distinctly remembers Lightning awakening from her crystal slumber along with most of her other friends. However, nobody else remembers this, and thinks that Lightning is dead. Shortly thereafter, a meteor strikes the ground near the town, and with its arrival comes a man named Noel, who claims to be from the future, sent by Lightning to retrieve her sister. This marks the beginning of a lengthy journey through time as the pair try to unravel the cause of all the mysterious paradoxes in the timeline and reach Lightning at the end of days.

To be frank, even if you have played Final Fantasy XIII, the story of XIII-2 is convoluted, confusing, and often nonsensical, ripe with the same sort of pseudo-philosophy that marred the Dissidia spin-offs. It regularly ignores the concept of causality, except when it doesn’t, and uses paradoxes as the primary source of conflict, some of them being so nonsensical that it defies all logic. In one situation, a boss is completely unkillable because it travels back in time and rebuilds itself when it’s destroyed. Worst of all, the game finishes up with a massive cliffhanger; whether that means we can expect Final Fantasy XIII-3 or just a lot of downloadable content remains to be seen.

That said, the story isn’t all bad, and in fact does a number of things quite well. The game handles time travel in a unique and interesting way, allowing players to visit the same areas in multiple time periods, and even creates alternate reality versions of them as the plot progresses. The year 10AF and 1XAF are exactly the same time periods, but alternate versions of history. The game jumps through time in a nonlinear manner, and players will often have to return to various ages and locations multiple times in order to progress. New side quests become available over time, and some of those quests require visiting different ages in order to complete them. The whole thing is structured very well. 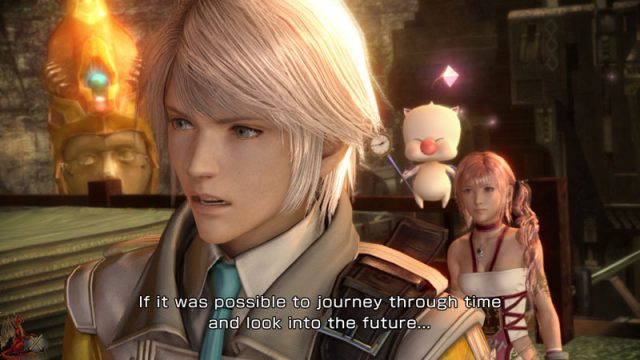 Hope is all grown up, kupo!

The game also introduces Mog, Serah’s moogle companion, and one of the most entertaining aspects of the game’s story. If Final Fantasy XIII was defined by Sazh’s “chocofro,” then XIII-2 is defined by Mog. The adorable companion also plays a regular part in the gameplay; not only does he turn into Serah’s weapon for some reason that’s really never explained, but he has a couple of useful powers that aid in their journey. He can unlock items that are trapped in time, and Serah can throw the poor little guy in order to reach treasure spheres that are out of reach.

Final Fantasy XIII-2 takes great strides forward in its level design. The painfully linear areas of Final Fantasy XIII are entirely gone, replaced by much more engaging maps. Areas like the Archlyte Steppes and the Dying World 700AF present sprawling, wide open spaces, while areas like the Bresha Ruins or the Sunleth Waterscape provide tighter corridors that separate into multiple branches. Many of the dungeons feature elements of the environment that can be manipulated, creating miniature mazes and small puzzles. Of course, most areas also have sections that can only be accessed in certain time periods.

The way Final Fantasy XIII-2 handles combat, unfortunately, is an area where it missteps, and is one of the only reasons that it fails to surpass its predecessor. Mechanically, the combat system is nearly identical to Final Fantasy XIII‘s paradigm shift system, but it falters in its execution. Noel and Serah have access to six class roles, Commander, Ravager, Sentinel, Synergist, Saboteur, and Medic. Each role is designed to perform a different function in battle, whether it be attacking, defending, buffing, debuffing, or healing. Players create a set of six “paradigms,” which consist of a grouping of any three of these classes, creating an overall strategy for battle. Players are then free to switch between these paradigms at will during battle. Individual attacks and skills can be selected manually, but the game offers up an auto-battle function which is much more efficient and always the default cursor position. In this way, the combat encourages broader, tactical decisions rather than detail-oriented micromanagement.

The third slot in the party is filled by capturable monsters, each of which has a singular job role that it’s adept at. Players can create a set of three monsters to accompany them in battle, and one of these monsters take up the third slot at a time, based on the current paradigm. Monster collection adds an interesting new facet to combat, as monster companions often have access to active and passive skills that Serah and Noel can never learn. Some monsters also increase in power more quickly than others, and many can even outpace Serah and Noel in terms of sheer power.

In fact, based on its core components, XIII-2‘s combat system is actually a slight improvement over XIII‘s. The issue, sadly, comes in the form of game balance. The thing that made Final Fantasy XIII‘s combat system so much fun was the fact that, for the entire course of the main game, the balance was tightly and meticulously controlled. Characters had a cap that they were unable to surpass during each chapter, and in that way, Square Enix was able to ensure that players would never be so strong as to eliminate the challenge of a given area. 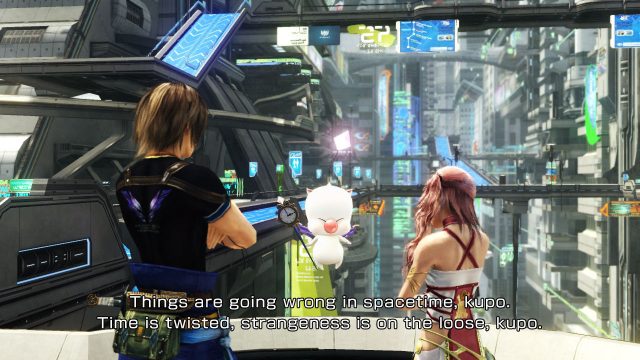 This balance is completely lacking in XIII-2. There are no caps placed on levels, and the new system allows players to rapidly advance all six job classes simultaneously. As a result, players will find themselves quickly outpacing the content. Within ten hours of gameplay, normal encounters will rarely require any real input, and even boss battles will be fairly trivial. Shockingly, the game even offers up an easier difficulty. Without the challenge, the paradigm shift’s flaws become more apparent. The game literally starts to play itself, and it grows tedious. When a RAV/RAV/COM paradigm can get you through virtually every normal encounter on its own, all players really have to do is press A to win. The tactical decisions that are at the core of the battle system become completely unnecessary except in the rarest of circumstances. The challenge reappears in the final parts of the game as well as the post-game, but for the majority of the playthrough, Final Fantasy XIII-2 is simply way too easy.

As can be expected from a Final Fantasy game, the visuals are stunning. The environments are all gorgeous, but certain areas such as Academia and the Sunleth Waterscape stand out as truly phenomenal. The characters are all beautifully modelled and animated, and the attention to detail is terrific. In an odd move, however, Final Fantasy XIII-2 takes a bit of a step backward by removing enemy models from the environment. They do appear in the world just before an encounter begins, but the new system is essentially a return to random encounters, which seems like a strange decision. It also makes the wide-open areas of the game seem rather bleak and empty, especially when compared to Gran Pulse in Final Fantasy XIII.

Artistically speaking, the soundtrack is the real shocker. Final Fantasy XIII-2‘s soundtrack doesn’t sound like a Final Fantasy soundtrack. The score is very diverse, and there are a lot of vocal tracks throughout the game. In fact, it bears a much stronger resemblance to the work of Shoji Meguro in the Persona series than to other Final Fantasies. The voice work is excellent, though it falls flat when the actors have awkward dialogue to work with. Noel says “Let’s save the future!” far too many times for it have any real meaning.

Final Fantasy XIII-2 is an obvious attempt to appease slighted fans, but in doing so, they’ve created a paradox of their own. Those players who simply wanted a bit less linearity will probably be sated, but anyone dissatisfied by XIII‘s story or combat will find XIII-2 is worse off in that regard. Fans of Final Fantasy XIII will undoubtedly find plenty to love in its sequel, but some may find the lack of challenge a turn-off, particularly after some of Final Fantasy XIII‘s more epic boss fights. Overall, XIII-2‘s more diverse play experience should make it a more palatable game to a larger segment of gamers. Whether or not it’s better than Final Fantasy XIII is something I leave for you to judge for yourself.