Launching for the PC in the fall of 2003, Final Fantasy XI quickly brought Final Fantasy fans into the world of online role playing. This title features a persistent, online world called Vana’diel in which RPGamers from the US to Japan and beyond would interact through adventuring and creating an online world economy. Taking the series in a controversial direction was a risky venture for Square Enix, but it paid off as people from all over the world travel throughout Vana’diel destroying great beasts, hunting for treasure, and becoming heroes.

Within the world of Final Fantasy, there is nothing else like this. As a role-playing game built completely around interacting with other players in a virtual world, FFXI takes the series and turns it on its head. For some, this comes as a welcome distraction, but for others, it is less than appealing. Having to pay a monthly fee in order to play is also a new and unwelcome change from other games in the series, but is an almost unavoidable problem of taking the RPG genre online. Regardless, Final Fantasy XI tests the waters by taking the series in a completely new direction.

Gamers begin with a character creation process, picking a race from Hume, Elvaan, Galka, Mithra, and Tarutaru. Each race has their own strengths and weaknesses. Galka are strong with high HP but have low magical ability. Tarutaru are physically weak but very powerful with magic. Elvaan are very strong, fair with magic but slower and slightly less accurate than other races. Mithra are quick and agile, fair with magic but not physically powerful. Finally, Humes are well balanced in all areas.

The second step in the character creation process is job selection. Player can choose from Warrior, Monk, Thief, Red Mage, White Mage, and Black Mage. This decision is not a permanent one, as gamers can change jobs at specified areas as they wish later on. Upon reaching level 18 in any of the starting jobs, players can undertake a quest to obtain the ability to equip a support job. The support job ability can boost a character’s stats and give job abilities to a maximum of half of the main job level. For example, if a character’s Warrior job is level twenty and their Monk job is level fifteen, that character can equip the Monk job as a support at level ten, half of the main job’s level. This adds a massive variety of character customization options, though some are more useful than others. 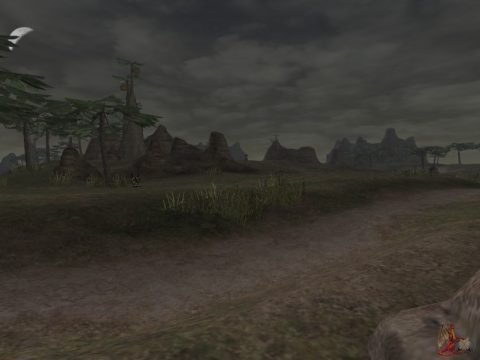 A romantic evening of death.

Moving past character creation is the heart of the game: combat. The battle system of Final Fantasy XI is rather diverse due to the fact that the majority of combat takes place through interaction with other people. For only the first few levels are characters able to progress alone. Upon reaching the mid to upper teen levels, characters can progress much faster and safer in parties of up to six. This begins a journey of frustration for some, as they are forced to form balanced parties. Certain roles must be filled, as unbalanced parties will have trouble leveling in a safe manner. Frustration can also stem from partying with incompetent gamers or not being able to find a party. Some jobs are highly sought after, while others can be easily overlooked. This varies from day to day and hour to hour, so those with little or inflexible time can find themselves irritated very quickly.

As characters progress, new quests and missions open up. Quests are usually simpler and smaller in scale than missions, though some can be fairly vast. Missions tend to be heavily group focused and offer a good deal of story within the world of Vana’diel. Compared to other MMORPGs, Final Fantasy XI has a very detailed storyline. Where other games in the genre offer bits and pieces of world history for the player to find as they wish, FFXI takes gamers through the rise of the beastmen against the allied nations of Vana’diel. Throughout the main story, many plots twists occur with each adventurer finding themselves in the role of a hero helping to battle the rising evil. Along with the main story, gamers can also venture through the epic stories of the expansions: Rise of the Zilart, Chains of Promathia, and Treasures of Aht Urhgan. All of the stories will require many days of leveling and lots of time to complete each part. To do all that is needed to finish just the missions will take months of play. Gamers can play for months or years even and never even make a dent in the story if they wish. Final Fantasy XI’s character progression and equipment procurement process can alone be enough to entertain gamers. Many social or event oriented groups known as Linkshells are formed and can provide tons of enjoyment for others. Truly, this game has something for almost everyone, if they just have the time. 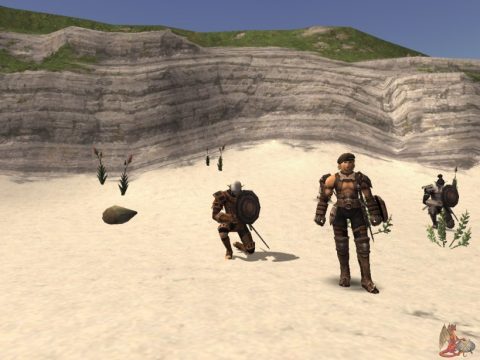 It’s impossible not to loathe “teh Dunes”.

Movement, menus, combat, and all other interactions are easily accomplished via mouse and keyboard controls, though a gamepad can be used if desired. Characters must target NPCs, enemies, and other players in order to interact with them. Be it trading items, selling weapons or armor at the auction house, or using a weapon skill on an enemy, the player must manage everything through the use of drop-down menus. The use of macros makes certain tasks such as using job abilities much easier, as a gamer can program a specified keyboard shortcut to perform a certain action quickly. The vast amount of options available to the player can be overwhelming and confusing at first to those not accustomed to MMORPGs, but Final Fantasy XI does a good job of giving players all the tools they need. Item management can be a pain however. With only limited space for storing items, pathetic prices to sell things to venders, and limits on auctions, maintaining all of a character’s items, armor, and weapons can become frustrating very quickly. Many players will pay for and create extra characters for the sole purpose of storing items.

Visually, Final Fantasy XI can be quite beautiful. Areas such as the lush Jugner Forest or the Sanctuary of Zi’Tah are vast and highly detailed. Characters themselves may be limited as far as models go, but the detail to weapons and armor are impressive, especially the class specific Artifact Armor that can be obtained once a job is in the level fifty to sixty range. Musically, FFXI does a good job of providing music when and where it is needed. Town music, in areas such as San d’Oria can be a little irritating after a while though. Music played during battles and cut scenes are very fitting and help immersion. The one standout is the opening theme by Nobuo Uematsu which is played during the game’s introduction cinema. Other impressive musical offerings are the themes of Ronfaure and Sanctuary of Zi’Tah. Overall, most of the music is just background noise and does a good job of not becoming repetitive and annoying.

Needless to say, Final Fantasy XI with its monthly fee and online requirement is not for everyone. Those that have the time to invest into the game will find an experience like no other as this game does have a Final Fantasy feel to it. With an impressive story, deep character customization, and thousands of things to do, Final Fantasy XI can suck away the life of any who play it. How long that experience lasts depends solely upon the gamer’s patience and frustration tolerance. Gamers could end up playing for hours, days, or even years. This is a Final Fantasy like no other.