It’s finally here — or at least the first part is. After many years of waiting since it was first hinted at, Final Fantasy VII Remake offers the first title in a planned series that completely reimagines the original Final Fantasy VII, first released twenty-three years ago. Square Enix goes all out in this creation, with an incredible level of presentation that really puts players inside the city of Midgar. There was a mixture of both excitement and apprehension to see how it would all turn out, but this first part does about as well at kicking things off as anyone would have reasonably expected.

The game starts in exactly the same point as the original, with mercenary Cloud Strife joining the group Avalanche in its mission to blow up a reactor in the city of Midgar. The Shinra company runs said reactor, and the entire city for that matter, which uses an energy called Mako, and Avalanche contends that this energy is killing the planet and seeks to stop its abuse by any means necessary. Cloud himself is a former member of an elite Mako-enhanced force within Shinra known as SOLDIER. 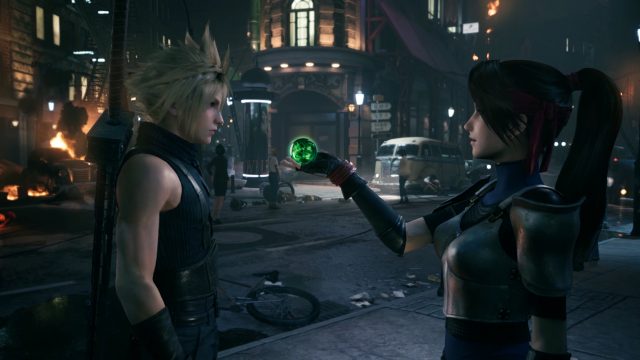 It wouldn’t be Final Fantasy VII without Materia.

Final Fantasy VII Remake contains nearly all of the story beats from the equivalent portion of the original game, up to the “escape from Midgar” sequence. However, it also contains plenty of new content that does a fine job adding to the characters and the location of Midgar itself. Tifa is one of the characters to benefit most from this, as the game does a great job in showcasing her motivations and her relationship with Cloud, while Cloud himself is much better showcased as someone trying to portray a tough exterior and not doing a brilliant job of it. Jessie, Biggs, and Wedge, the previously minor members of Avalanche, also get much more screen time to show off their personalities, and the game is all the better for it. Final Fantasy VII Remake makes fine use of lighthearted comments and cute or amusing sequences to keep things from getting too dour. The readily apparent care and attention that has gone into the script — enhanced by excellent voice acting from its main cast — pays off immensely in making players care about the cast and the less-fortunate denizens of Midgar.

That’s not to say it doesn’t deviate from its base in some major ways, however. The biggest departure are the faceless hooded spirits that appear en-masse multiple times for unknown reasons. There are also several mentions and hints to things that only came up later in the original game. These elements sometimes make it feel as if the game is geared more towards Final Fantasy VII veterans, but there are enough new questions to ensure that everyone leaves this part of the Remake uncertain of just what the future holds.

There are some narrative quibbles to note. The pacing sometimes feels contradictory; one lengthier sequence seems set to offer an emotional and atmospheric experience, but its appearance during what is ostensibly a race against time causes these happenings to feel oddly jarring. The ending point feels like an appropriate spot to leave things for now, but it certainly doesn’t provide anything that could be considered a conclusion. The finale provides lots of intriguing thoughts to keep players contemplating what lies ahead and goes all-in on creating a cinematic experience, but it also feels like that cinematic element comes a little bit out of nowhere and is mostly there just to ensure some bombastic final boss fights. Despite that, it offers an incredibly enticing tale and one can’t help but be excited for what lies ahead. 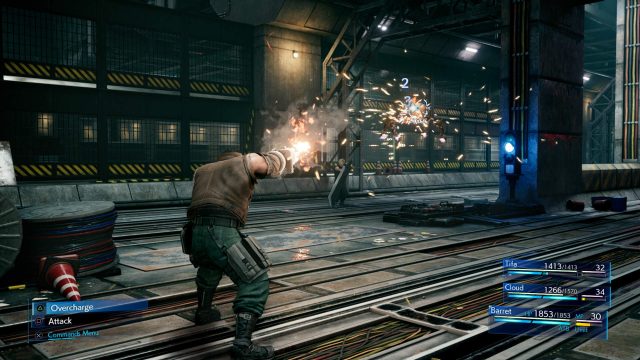 Different characters work better against certain enemies and players will want to get used to swapping the controlled character frequently during combat.

Final Fantasy VII Remake continues the series’ evolution of Active Time Battle into real-time action. Players control one of the three party members at any one time, but can switch with a simple button press. The square button unleashes regular combos while the triangle button offers a unique action for that character. Dodging and guarding are also available and can be important for surviving. These actions are available to use freely, but they also fill the ATB gauge below each character’s name and HP total. Once one of the sections is filled, players can give orders to use magic, a special ability, or an item.

The system requires players stay focused and on their toes. There are some useful touches that help alert players, like the outsides of the screen going red whenever a party member is at low health to make clear some prompt healing might be needed, but it takes a bit of time to get to grips with everything and know what to look out for. AI will control the other members well enough to keep them alive and out of unnecessary danger, but players will need to learn swiftly that switching between characters and giving orders is the best way to go for getting the most out of the party, especially as the AI is much slower at building the ATB gauge for those it controls. The combat is at its best for boss fights, which often feature great back-and-forths as players figure out how to mitigate the boss’ attacks in addition to dealing damage themselves, even if they can be a little long.

The combat system has some weaknesses, which can lead to annoyance. Certain enemy types cause frustration just by being hard to hit or follow with the camera, which is especially evident when there are more than one to take care of at once. There are some settings that can change the camera controls — particularly how the lock-on works — and players having difficulty with it will want to test out to see which works best for them. Final Fantasy VII Remake’s Normal difficulty should provide a decent, but not overly strong, challenge for most players, with two easier options also available that can be switched to at anytime. Battles can be retried freely, and it sometimes feels that this is a preferable option than trying to win a tough fight, simply because most battles become much easier through tweaking the party setup or tactics applied. There’s definitely a learning process to Final Fantasy VII Remake’s combat, but as a result it becomes incredibly rewarding to those who can stick with it and become able to best use their arsenal to full effectiveness. 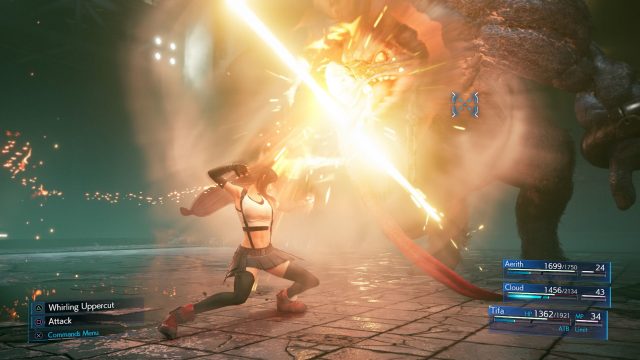 Combat feels at its best during boss fights.

Final Fantasy VII Remake is linear, divided into nearly twenty chapters, but there’s enough exploration elements to keep that engaging as well as a few times players get a bit of downtime to wander around are undertake sidequests. The sidequests themselves are the usual RPG fare — kill certain monsters, find certain people or items, etc. — but offer a nice excuse to wonder around a part of Midgar. Remake also shares the original’s penchant for mini-games, offering nice breaks from the regular action, including an additional bike section and a bizarre yet wonderful sequence in Wall Market among many others. There does feel like some padding, the aforementioned atmospheric sequence mid-way through and the second-to-last chapter both run much longer than they needed to without gaining anything from it, but the overall length feels just about right for the content.

Materia played a big part in character customisation in the original and the same applies here. Each weapon and armor option has a number of slots in which to put these orbs, which primarily provide access to specific spell types, such as lightning or healing magic, but also offer other boosts, some of which can used in conjunction with other Materia. Remake adds to that customisation by making weapons upgradable, giving lots of passive boosts as well as potentially unlocking new Materia slots. Each weapon also provides a unique ability that can be learned permanently with enough use.

There are some points where some considerably lower resolution textures can be spotted, but can be easily forgiven with how well the visuals are used. The designs of Midgar are familiar, but given a whole new perspective. The oppressive plates encircling Midgar are now always in full view, and there’s the definitive sense of the ground-based populace trying to make do as best it can in a grim situation. Midgar is expertly showcased through both the wider picture showing its scale as well as through all of the fine details present in abundance. On top of this, the direction of cutscenes and the action of combat makes what is ultimately a thirty-hour visual treat. 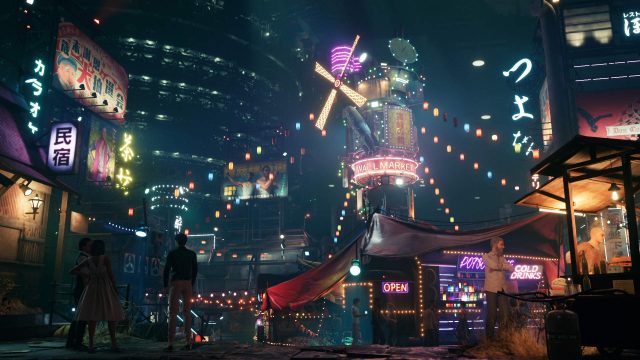 The same goes for the audio. Masashi Hamauzu and Mitsuto Suzuki head up the Remake’s soundtrack, providing a mixture of variations on the original themes as well as plenty of brand new tracks and they work wonders throughout. On the voice acting, Britt Baron is a particular standout as Tifa, but all of the main cast do an excellent job in conveying their character’s emotions during events. A few characters are a little bit overacted both visually and audibly, but the general groundedness of the main party remains strong throughout.

Returning to Midgar has been a much more fulfilling experience than I expected going in. Seeing all of these characters, and the world, fully realised in 3D has given me a whole new appreciation for them and I’m very much looking forward to what’s next in store. Exactly how successful the full project is remains to be seen, but the first part of the Final Fantasy VII Remake has done everything it could in getting me incredibly excited for the second.