The DS Files — Fight the Fantasy

The Fighting Fantasy series has existed in book form for decades, and Fighting Fantasy: The Warlock of Firetop Mountain represents its first video game incarnation. Unfortunately, this is not a gateway drug to get newcomers interested in the Fighting Fantasy franchise, for the game has issues that will restrict its appeal. Taken altogether, Fighting Fantasy‘s combined problems make it hard to recommend unless one is already a devotee of the book series, and even for those players it will seem lacking.

Fighting Fantasy‘s DS incarnation has a sparse story that finds the player’s character seeking to pilfer the eponymous warlock’s gold horde. This goal remains the same throughout the game, with fetch quests serving to stretch the playing time out a bit while one explores the mountain. This would be acceptable if the Fighting Fantasy books were not known for their multiple story tangents akin to the Choose Your Own Adventure series. There are almost no choices to make in this game, and this is a detriment in a game trying to be faithful to its source material.

Exploration of the mountain takes place from a first-person perspective. The d-pad moves the player around, and changing the faced direction is done via the DS’s face buttons and touch screen. The touch screen is used for other things, however, and it is very common to accidentally hit the wrong part of the screen and do something undesired. All interaction, whether it is with NPCs or inanimate objects such as doors, is accomplished with an icon that pops up on the touch screen when the player is in range. This means that the stylus can never safely leave the player’s hand, which is not particularly bothersome until combat is factored into the touch screen use.

Attacking with whatever is currently equipped can be done using the shoulder buttons and the touch screen. While physical attacks can be used without having to glance at the touch screen to make sure that the proper area is being probed, any magic the player has learned must be used via an icon on the touch screen, and doing so will require the player to look down instead of at the enemies moving around on the top screen. The real time nature of the combat is frequently the problem, since there are multiple small icons for each function on the bottom screen, and the player has to quickly use the correct one while enemies are swarming around. The touch screen’s icons also require very precise prodding, or else the player might just change the viewpoint instead of casting a spell, which will prove vexing. Shopping is also done by dragging things from one side of the bottom screen to the other, which becomes annoying since using the d-pad and buttons would have been more efficient than dragging everything around the screen. 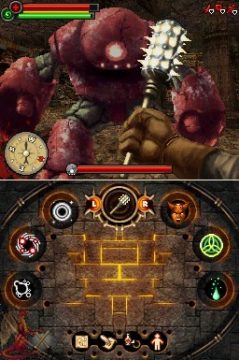 Are you intimidated by this cyclops monstrosity? Hopefully not, since there are a lot to plow through.

At the beginning of the game several questions will shape the character taken into battle, and that character’s growth is determined by the player throughout the game. Every level gained gives the player two points: one for statistic increases and one for ability augmentation. Almost every piece of equipment in Fighting Fantasy requires that a certain statistic be at the right number, and it is necessary to choose which pieces of equipment are better suited for the path preferred by the player. The variety of weaponry on display is impressive, and the skills available can drastically alter how one plays the game. This is the best aspect of Fighting Fantasy.

While moving around the mountain’s interior, backtracking will be necessary, and it is at this point that the problem that is an amenable map’s absence rears its head. The game does display a map of the current room, and the player can shift to the other room views using the touch screen. The interior of the mountain is pretty voluminous, however, and moving around one room at a time via the displayed map is not the best method of looking at its parts, particularly when the name of a room is only displayed when that room is chosen to be viewed.

The visuals in Fighting Fantasy are a mixed bag. Positive components include the nice background work of the mountain’s locales, a distinct look for every weapon, and some nice artwork for the enemies. The initially appealing enemy looks are tempered somewhat by the fact that only their front side is ever seen, since the game makes them constantly spin around to face the player. Some of the locale backgrounds are suspiciously flat instead of three dimensional when approached, which detracts from the effect. As for the audio, no music will be heard while playing Fighting Fantasy. Only sound effects will be experienced, though this approach works much better for a survival horror game. The sound effects of enemies are fairly varied, but during the numerous periods of the player traipsing empty corridors, the sound of nothing but footsteps is incredibly monotonous. 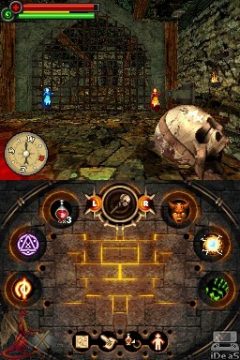 The age of this skull is not disclosed, so whether it fossilized and became a weapon that won’t break is never revealed.

The challenge of Fighting Fantasy is distinctly unbalanced because of its autosave system. Upon entering a room, the game automatically saves progress, and that save can be reloaded repeatedly until the player reaches another room. The enemies in a room and their locations change each time a save is loaded, so if the player is hacked to bits simply trying again will eventually achieve a workable layout. Exploiting lackluster enemy AI can be done throughout the game to counter the powerful attacks adversaries can perpetrate, cementing the inconsistent quality of the difficulty.

The seven to fifteen hours required for completing Fighting Fantasy will be a by-and-large frustrating experience. The freedom in developing one’s character is the only overwhelming positive, and dealing with the aggravating controls will not make players happy. The Fighting Fantasy franchise is known for a plethora of choices in its stories, making the minimal story in this game a further disappointment. There are also a few bugs, none of which is game-breaking, but they may require shutting the system off and reloading. Fighting Fantasy: The Warlock of Firetop Mountain is a missed attempt to start a new video game series, and it will hopefully receive a sequel to capitalize on the potential of a property that has been squandered.