Exist Archive: The Other Side of the Sky PS4 Review

Were you aware that, when you die, your soul is transported to an alien waystation where it is redistributed to other planets by an AI dressed in traditional Japanese garb? Such is the premise of Exist Archive: The Other Side of the Sky, a collaboration between tri-Ace and Spike Chunsoft that is more than a little reminiscent of the former’s cult classic, Valkyrie Profile. But despite a strong pedigree, a promising start, and some solid core gameplay, Exist Archive fails to capitalize on the existential questions it initiates and ultimately falls flat.

Exist Archive begins with a boy named Kanata suffering a traffic accident in Tokyo. As he lies there dying, he’s absorbed by a bright light that fires up into the sky alongside several others. When he awakens, he finds himself on a mysterious planet made up of floating rocks, with a strange, futuristic tower at its center. There’s also a strange voice emanating from his hand. He soon discovers that he isn’t the only person to find his way to this strange place, which turns out to be a planet that all souls pass through before being reincarnated.

The conceit of combining traditional ideas of spirituality and reincarnation with classical science fiction is an interesting one, but sadly, Exist Archive really fails to do much with it. The story is plodding and minimalistic, and few questions players are presented with are ever given proper answers. Players are instead given very broad and general concepts that they’re forced to take at face value. Very little of this universe’s lore is ever explored. Even the character interactions are pretty minimal, and often rather cheesy. Right off the bat, there’s a lot of potential, but it’s never fully reached.

The gameplay, thankfully, reaches better heights than the story, particularly the combat system, which is similar to Valkyrie Profile‘s. Combat is divided into two phases: the attack phase and the guard phase. During the attack phase, players can choose a target area on the enemy’s side and launch attacks by pressing the face buttons. Each button is associated with a different character, and players can string attacks together into lengthy combos. How many attacks can be launched is determined by the AP gauge. Players can also prematurely end combos by not pressing any further buttons, giving one a chance to change targets. There’s also a menu that can be opened during battle, granting access to item use and special spells. 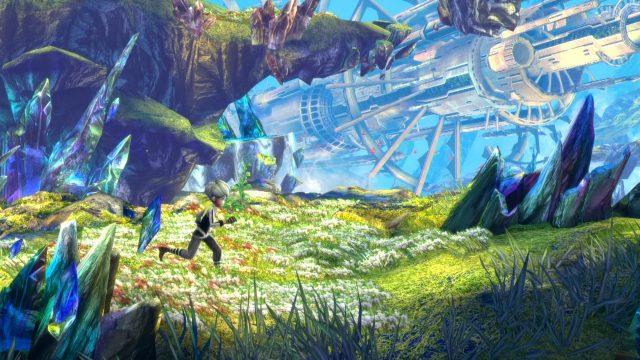 Spells and item use in the game function a bit differently from regular attacks. While they still draw on the AP gauge, they also use another resource called CT. Characters recover one CT each round, and spells can cost anywhere from one to four CT to cast. Effectively, this means that more powerful spells render the caster immobile for several turns. At the same time, spells are the most reliable method of healing, which means having a mage in the party is pretty essential.

The guard phase works in a similar way to the attack phase, except that the enemies are the ones on the offensive. Each character can be told to guard by pressing the corresponding face button, reducing the damage from incoming attacks. Guard can be broken by powerful attacks, and it’s utterly useless against magical assaults (unless the character has a particular skill equipped), so it’s not always worth guarding. Oftentimes a character won’t even be targeted with an attack, and against many enemies it’s fairly simple to predict their targets. Just like attacking, guarding costs AP, but any AP that remains at the end of the guard phase gets carried over to the next attack phase.

There’s also a special attack gauge that becomes available as the game progresses. This gauge fills up as players unleash bigger and bigger combos, and once it’s full, a character can launch a special attack. Like spells, these special attacks cost CT, so they can’t be used after using an item or spell. The gauge also resets after every battle, which means it’s always worth using them when they become available.

Combat is supported by a rather hefty skill and equipment system. Characters get two skill points to spend each level, which can be allocated to a variety of special skills or to improve the level of their class. Each character can equip up to four skills: an attack skill, a guard skill, and two support skills. Later in the game, players will unlock the ability for characters to share their learned skills with their allies without the need to spend points. Players will also find a ton of equipment throughout the game. Enemies drop it like candy, enough to make even third person looters blush. Eventually it starts to become a hassle to sort through it all, but thankfully there is a “best equipment” option which will automatically optimize a character’s gear. 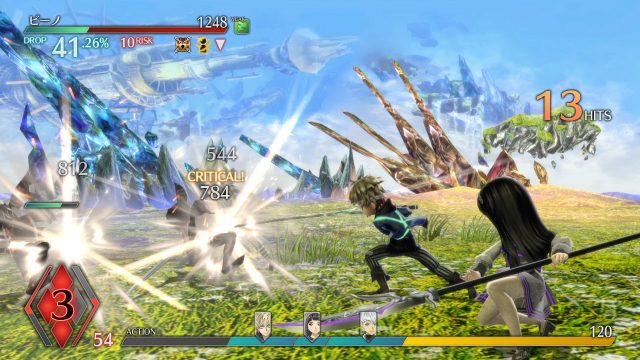 Combat is fast-paced and engaging.

The level design, unfortunately, isn’t nearly as good as the combat. Like Valkyrie Profile, levels are laid out in what’s become known as a Metroidvania style. Players move around in 2D platforming stages, moving from area to area in order to reach their goal. While there are some really solid platforming sections scattered throughout, there’s also large stretches of plain, flat land. On top of that, levels are littered with one way paths, none of which are marked on the map. This can make navigation quite frustrating. Coupled with the large number of enemies, it’s not uncommon for it to take up to two hours to get through a dungeon, and saving is not available during this time.

The artwork in Exist Archive is quite stunning. The environments are vibrant and the character models, despite being strangely disproportionate, are shockingly emotive in their animations. That said, there’s a lack of variety in the number of environments players can explore, and the same can be said of the number of enemy models. Pallet swaps are frequent, and eventually even boss models are recycled as regular enemies. The music is atmospheric and does a great job of setting the tone, but rarely stands out. The voice acting, unfortunately, isn’t that great. Characters tend to speak in a strangely slow cadence, and the dialogue is often repetitive and overly verbose.

Exist Archive is a game with a lot of potential that ultimately feels like it’s missing something. The story starts with a heap of promise but ends up going nowhere with it, and the great combat is unfortunately marred by frustrating, lengthy level design. While I wouldn’t go so far as to say the game is bad, it is disappointing in too many ways to really call it good.